Q&A for The Frightful Ride of Michael McMichael 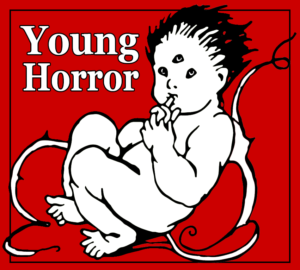 It’s Friday the 13th–the perfect day to reach down into the grave dirt and resurrect the Young Horror (formerly YA Horror) blog and to talk about NEW BOOKS.

Hop aboard the Thirteen bus and drive through the brand new spooky picture book The Frightful Ride of Michael McMichael (Candlewick 2018). Author Bonny Becker and Illustrator Mark Fearing give all the gory details to HWA YH blogger Shanna Heath below.

Whether you write horror for young people, or want to share more horror stories with the kids in your life, check in every Monday for Young Horror Writing Prompts and every other Thursday for new articles and interviews. Managing members Ally Russell, Mac Childs, and Shanna Heath have each graduated from Children’s Literature professional programs, and are eager to let you pick (not eat) their brains about Young Horror. 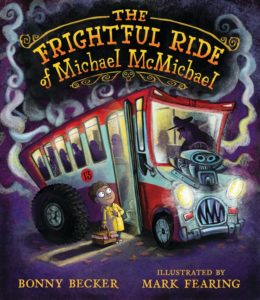 Cover art by Mark Fearing for The Frightful Ride of Michael McMichael.

Q: What’s the appeal in writing/illustrating a spooky book for children?

Bonny: It’s fun! And challenging to walk that knife edge of scary but not too scary. It’s fun to walk to the edge of a cliff and look down—but only if the danger is an illusion. So I’m hoping The Frightful Ride of Michael McMichael hits that sweet spot.

Mark: I have always enjoyed spooky material. When I was seven or eight, my father would play old Frankenstein and werewolf movies on Super 8 and 16mm film on Friday nights. Reading scary things was part of how I learned to read, and I have seen this repeat in my eleven-year-old daughter’s life. That’s why the book is dedicated to her.

The best scary things are the scary things we can control. We can close the book, turn off the film. But interacting with these fictional and fantastical fears can give us great strength in dealing with so many of the fears we face in life. Things unknown, lurking in the shadows, are powerful metaphors. In fact, I suspect these “scary things” are the first metaphors most of us understand, even at the simplest levels. These are core elements of what it means to be human, to abstract the literal world and find meaning and fun in it. 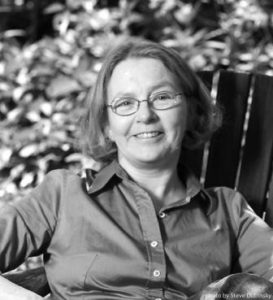 Q: What role does humor play in writing/illustrating a spooky book?

Bonny: Humor is the great enemy of fear. It eases fear by putting the horror at a remove. But it’s also cathartic. It’s a release. Fear is so internal, so psychological. At least those are the horror stories I find the most frightening. Ones like The Haunting of Hill House or Rosemary’s Baby or Poe’s stories. Ones where the character can no longer trust her own mind. Humor is a way out of that horror. It suddenly puts everything into perspective. It reminds the character and the reader that there are other ways to read that bump in the night. And more often than not it’s the not-scary way.

“Humor is the great enemy of fear. It eases fear by putting the horror at a remove. But it’s also cathartic. It’s a release.” -Bonny Becker

Mark: Humor is an inherent part of scary material for both adults and children. I think there is a documented link between screams and laughs. A trip to a haunted house on Halloween will demonstrate that. I have done other scary children’s books, and I try to make them fun as much as I make them scary.

With Michael McMichael, I had the advantage of an amazingly poetic manuscript that leaves so much to the imagination. When I started illustrating the book, I wasn’t sure what exactly I was going to draw. The bus was only described as having “something not right” about it. That left a huge door open for me to decide exactly what wasn’t quite right.

I also had the opportunity to envision the individual passengers on the bus. I created an entire story in my mind about what exactly the bus was and why these people were on it and where they were going. I had no idea if this fit with the author’s vision, but it gave me a way to develop a visual narrative that extended beyond the narrative in the book. It gave additional depth and a sense of history to the illustrations that might not otherwise have been there.

Q: Why do you think kids like to read spooky/scary books?

Bonny: Oh, that thrill of fear, but in a safe space. Getting close to the edge, but not too close. Really little kids like the teeniest-tiniest dose. The high drama might be no more than the startle of peekaboo. As we get older we can take more and more of it. So, it’s that jolt, but also the confidence that comes in learning to manage it. J.K. Rowling illustrated this brilliantly with her use of the Riddikulus spell in the Harry Potter books.

Mark: Kids already live at a high emotional level. Laughing and being scared are two places the dial can be turned to. The world is big, confusing, strange, and scary, and other humans can be difficult and confounding and, yes, scary . . . and I say that as an adult! Scary things are part of the buffet of being human, and some kids will develop more of a taste for it than others, but I think most kids enjoy some exposure to it.

Q: What were your favorite spooky books as kids?

Bonny: I was not big on spooky books as a kid. I could too easily imagine the killer on the stairs, the monster under the bed. I think I was maybe eleven or twelve when I begged and begged my mom to let me watch that old Vincent Price movie, The Pit and the Pendulum. My mom kept telling me no, but I bugged her so much she finally relented. I was sick to my stomach for days afterward and had nightmares for weeks. But I did like things like Gahan Wilson cartoons and Edward Gorey.

Mark: Charlie and the Chocolate Factory was a pretty scary book I read as a child, and it was turned into a scary movie I saw as a child. I was always drawn to illustrated books, of course, and I had collections of the EC Horror comics that I read and reread. I had a record (vinyl) of King Kong, acted out like an old radio show, that I listened to every day all summer. I still have it.

I also clearly remember being scared and unnerved by Where the Wild Things Are when I was very young. My first exposure to that book left me with so many questions (a great book can do that), but I was pretty sure monsters as depicted in that book would eat you the first chance they got. And, of course, there’s Blueberries for Sal; the bears in that story always scared me. (I’m only half kidding!)

“Kids already live at a high emotional level. Laughing and being scared are two places the dial can be turned to.” -Mark Fearing

Q: Bonny, so many of your characters reflect a little piece of you. Do you see yourself in Michael McMichael, or are you perhaps the driver (evil laugh)?

Bonny: Good question! I think I’m a bit of both. So, okay, I hated being scared as a kid, but I didn’t mind dishing it out. You know, jumping out at the top of darkened stairs, telling my sister some scary story, pretending to go insane. You know, all the normal kid stuff. Right? That was normal, right?

Q: Why do you put a piece of yourself into your characters?

Bonny: It’s hard not to, really. Especially since I write mostly for kids, I find myself going back to what I felt as a kid. What I loved. What I hated. How I tormented my siblings. How they tormented me. How we stood up for each other. What made me laugh. On and on. Mostly it’s the feelings that I tap into, but when you’re a writer those feelings often turn into metaphors, which become stories.

The Frightful Ride of Michael McMichael actually came out of a love for tall tales by writers such as Robert Service, especially “The Cremation of Sam McGee” which my dad would read to us. Such macabre humor, such chewy words!

Q: Mark, I see you have a love for monsters, and the Thirteen bus reveals itself to be very monstrous by the book’s end. How do you design a successful monster like the bus, its driver, or Gran’s sweet thing?

Mark: When I received the manuscript, I talked with the editor and art director, who had some pointers and ideas. Scary, but not too scary. With my other “scary” picture book, The Book That Eats People, amongst the sixty-some Amazon reviews there are a few that say nothing scary should be available for readers this age. But I think it is first and foremost fantastical and fun. Scary plays into it, and it’s not for every kid. But I tried to keep it fun and funny. And most importantly, our hero makes it out just fine, having always had the upper hand!

As for the bus, it took a lot of revisions and ideas. I suspect the art director saw only one or two, but I had a load of them: some with insect legs, some as a slug-like creature, some more like a broken-down old bus in the style of Edward Gorey. Since the manuscript gives very little detail about what exactly the bus looks like, I got to unleash my imagination.

I was inspired to make it more hot-rod and intriguing to a young reader, and not just haunted-looking. The driver took a lot of different forms and demanded the most effort, though. Bonny left some pointers in the text of what she imagined, and I remained faithful to what she wrote but tried to add additional details and intriguing visual cues. And as for Gran’s sweet thing . . . I think we all know that Michael McMichael is carrying Cthulhu in that basket.

Mark: I could write chapters on this question! As a child, I was obsessed with werewolves. I had very systematically worked out why they were the scariest monsters: Frankenstein is slow; I can outrun him. Vampires you need crucifixes and garlic to thwart; I can get those. But werewolves are fast and can climb and jump and who knows where to get silver bullets, right? Man, werewolves are trouble! So werewolves are at the top of my list.

I also very clearly remember reading The Keep by F. Paul Wilson and being so scared, I could hardly turn the page. This was while living in a hundred-year-old farmhouse in rural Minnesota. So yeah, I spent some scary nights with those vampires. Many, many Stephen King books and short stories introduced me to monsters I had never imagined. I have very fixed memories of where I was when I read certain of his stories. The original Alien film holds a top slot in the Scary Alien genre for me; love those creatures.

I’d also like to call out that I have some all-ages scary-fun e-books available on the Apple iBook store. The Thing with No Head and The Boy Who Was Swallowed by a Tiger are available. Check them out!

Shanna Heath is an author and monster slayer who writes horror for all ages. Childhood can be terrifying. Shanna makes monsters, then shows kids and teens how to defeat them. A lifelong horror fan, Shanna was inspired to write horror for young people after re-reading Baum’s Ozma of Oz as an adult. You can find her scary kids book and movie recommendations on her website, or connect with her on Twitter and Facebook. Shanna’s favorite young horror read is Coraline by Neil Gaiman.