Murder Most Fowl and Other Holiday Horrors 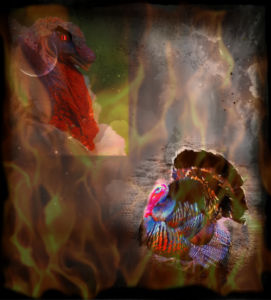 Somewhere in the United States this moment, a large turkey—with glorious plumage, I would like to imagine—doesn’t know that he’s already been selected for presidential pardon for the American Thanksgiving holiday next week. In classrooms across the country, kids are consuming read-aloud picture books about other turkeys running from feast centerpiece fates. Many classroom games and educational activities are built to the theme of staving off the imminent death of the turkey—hide the turkey, disguise the turkey.

Can you, young schoolchild, alter this bird’s fate and save his life?

It’s all fun and games, and then we expect the child to happily go home and eat the lifeless turkey who has failed to escape that fate.

But it does illustrate that even such a sedate* holiday—as Thanksgiving in America is associated with a single meal, then a football game while people crash from turkey’s legendary tryptophan* triggering tiredness—can easily be mined for horror. After all, aren’t those children’s turkey read-alouds a kind of (extremely) mild horror in themselves?

*The sedateness refers to the holiday in pop culture, and this post will cover holidays more generally. If you wish to look to the specific darker history of Thanksgiving, the National Day of Mourning, for horror, tread carefully and educate yourself to make sure you’re respectful. American Indians in Children’s Literature is a good place to start.

*Tryptophan as a sleep-maker has been debunked, but the idea persists. However, there is evidence that tryptophan can give more vivid dreams, so perhaps horror writers can generate story ideas by doping on turkey to dream ghastly inspiration?

Aside from the turkeys themselves, which are generally treated as suitable only for the youngest horror readers,* family and food are two other holiday biggies ripe for young horror.

*(Though I’d argue that mean, feathered menaces should still populate scary stories for older people—but as antagonist rather than victim; why else are they called fowl/foul?)

There are two quick themes to be mined for the family aspect of the holiday: the protagonist’s own, or someone else’s. For the protagonist, dark family secrets and skeletons in closets can undermine her sense of security and safety in her family—such betrayals are ripe for tension—and force her to fight against her own family, far more difficult than deadly altercations with malicious strangers. As for someone else’s family, the most obvious example would be the protagonist meeting their significant other’s family via family gathering, only to find that to survive he must quickly Get Out.

For food, as the three fork prongs say, three tines (pun intended) food is scary are: being on the menu, eating something horrific, or even the very act of eating.

Being on the menu is the most obvious—after all, who wants to be eaten—and is the one in play in the turkey read-alouds. The way to deepen the horror of it for middle schoolers and above is to dwell in uncertainty. If your heroine suspects she might be the main course, give her ambiguous evidence to keep her—and your reader—on their toes.

Secondly, there’s eating something horrific. After all, who doesn’t love a good spot of accidental cannibalism? Be it people, poison, or just something disgusting that your hero has unwittingly consumed, you can enrich your meal by playing up the consequences. They can be guilt from having some other poor victim inside his stomach. Or, it could be a poisoning-born weaknesses that leave him vulnerable to the villains. Perhaps the wicked tincture he accidentally drank was a crucial part of a ritual to make his body a suitable host-vessel for an unearthly malignant force.

Thirdly, you can make every meal in horror count by drawing on the very act of eating itself. Use your authorly tricks to slow down the act of eating to turn it into something uncanny. Relish in the sensory details, the mouthfeel of teeth tearing into flesh, things normal but slowed down and with the right details will strike an unexpected level of offness that will linger long after the meal’s consumed. The trick is to find very visceral, specific, and unexpected details. There’s also the symbolic aspect of eating that you can use. The appetite for food is easily a metaphor for other, uncontrollable appetites, especially should the monster your hero is grappling with be inside herself.

And, finally—if all else fails and you still need inspiration for a holiday horror story, just head out to a shopping center on Black Friday.

One comment on “Murder Most Fowl and Other Holiday Horrors”