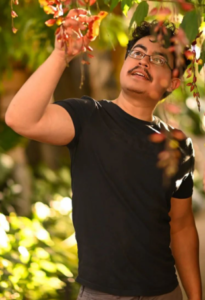 Robert Perez sleeps at the bottom of the ocean. Urban legend whispers that the writer can be summoned into your dreams if you read his work to a jack-o-lantern. You can find his poems and stories in the Horror Writers Association Poetry Showcase Volumes II, III, IV (Special Mention), and V, The Literary Hatchet #13 & #14, Deadlights Magazine #1, Five Minutes at Hotel Stormcove, and Community of Magic Pens. He is currently working on obtaining a master’s degree in counseling psychology at the University of Colorado Denver. Follow @_TheLeader on twitter to keep up with future projects.

I’ve always been a storyteller. As a young child my toys had storylines and there would sometimes be ongoing plots. I grew up as an only child which I think nurtured my imagination because I would have to keep myself entertained. There have been many wonderful teachers throughout my life who encouraged my artistic growth.

My birthday is close to Halloween so I have many early memories related to the holiday. I never feared ghosts, but wanted to interact with them and become friends. I’ve had a lifelong obsession with pumpkins. I tried to grow a pumpkin when I was maybe four years old and have a vivid memory of crying in the dirt next to the dead vine. I’ve pretty much been celebrating Halloween for my entire life.

Yes! First off I want them to exist. I have to create the change I want to see in the world. When I make these characters I’m aware of the world they will exist in, the context I’m placing them in, so they feel real. There’s an authenticity to it because I’ve lived it or witnessed it. I’m also gay, which has different interactions with my Hispanic identity. I have a romance story, called “Love in the Library” in The Community of Magic Pens Anthology, that focuses on a gay marriage of two Hispanic men. There is family conflict in the story due to the nonheteronormative marriage. Many Spanish speaking cultures romanticize gender roles, the patriarchy is very ingrained, so in regard to that I try to erode the harmful aspects and update tradition to be more inclusive.

It’s difficult to scare me. If a work of horror disturbs me then I’ll probably fall in love with it because it’s no easy task to get under my skin. Evil Pumkin Monster? Kraken? Ghosts? Monster Plant? Possessed Doll? I just think these things are super cool. If I were in a horror movie I might be that mad scientist who gets too close to the subject of his fascinated obsession. Part of horror is misunderstanding/miscommunication. I think we are going about this all wrong. We should try to be friends with the scary tentacled things. I bet Cthulhu loves cats.

Horror is at the forefront of pushing boundaries. This is also true when it comes to diversity and representation. So much of horror deals with “the other” and many of us often find ourselves “othered” by society. We relate to the heroes and the monsters. I believe we will continue to see diverse works and representations in media. I’m excited for the new exploration of myths and cultures. It’s way overdue.

Here’s a quick tip that helps people of Spanish speaking cultures in North America. When writing about cannabis in a post 2000’s time setting, refer to it as such or by any of its other nicknames excluding marijuana. The history of cannabis’s illegality in the United States is tied to the persecution of Mexican and other people of Spanish speaking cultures at the border during the 1930s. The use of the term marijuana is a microaggression as it is a Spanish word that has intrinsic connotations to illegality.

Ramo ́n Morales played by Michael Garza in Scary Stories to Tell in the Dark was refreshing and awesome! Anything Tenoch Huerta is in is amazing, he is so handsome and such a great actor! He was really great in The Forever Purge and the outstanding horror film based off a terrible historical fact- Madres.

Goddess of Filth by V. Castro! I read the book this summer and it felt like a vacation in that it took me back to my hometown in Texas! Cyna Pelayo (published under Cynthia Pelayo) has great poetry collections and an awesome new book Children of Chicago! Other authors to check out would be Gabino Iglesias and Alessandro Martinez!

In academics, in publishing, in upper echelons that historically have excluded us, sometimes you will be the only person of a Spanish speaking culture in the room or table of contents. You’ll have to work a lot harder to get recognition. You’ll have to be undeniable. But you already know how it is. Keep trying! Don’t give up! Try to use the adversity as fertilizer for your excellence.

One comment on “Latinx Heritage in Horror: Interview with Robert Perez”