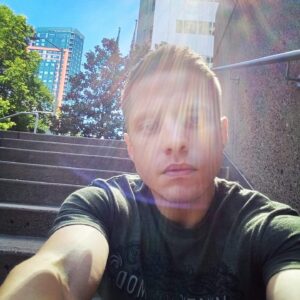 My name is Michael J Moore. I’m the author of Highway Twenty, which made the 2019 Bram Stoker preliminary ballot for Superior Achievement in a Novel, as well a other books and short stories. I’m an active member of the HWA, and a journalist who writes with an emphasis on social and racial justice.

I’m Mexican on my mother’s side, and though white-passable, I strongly identify with my Latinx heritage. Please feel free to Google “Michael J Moore author” to learn more about me.

Life. Love. Hate. Joy. Instability. I’ve always been somebody who sees a story in everything. Every dumpster I pass on the city streets harbors voices, calling out for help. Every abstract image is full of faces, maniacal and benevolent alike. Every face has a backstory, a personality, desires. Even the menacing ones. What really inspires me, though, are emotions. I’ve always believed good writing channels emotion and great writing causes readers to feel it.

It was nothing specific. I’m not sure it works that way for any of us, despite the countless creative responses we’ve all given to that question. At the end of the day, it’s just a matter of chemistry. Some of us are born attracted to the macabre, while other struggle to see the beauty in dark wit or even take it seriously. I could go on all day about how the genre’s used to comment on the world around us, or to hold up a mirror to society to show its ugliness, but the truth is all fiction does that to some degree. A like for horror is just a matter of preference.

Of course, I didn’t want it to come off as forced, but I try to portray realistic worlds and in the real world, Latinx people are abundant. Unfortunately, we’re underrepresented in storytelling and media. As a white-passable Latino, it’s easy to be insecure about using Latin-based themes in my stories, but at the end of the day, I know who I am and where I come from, so I just do what I know is right. My protagonists aren’t always Latinx, but I’m hyperaware of not omitting our people in places they belong in my stories.

The Latinx community make up a large percentage of the population but are undeniably underrepresented in horror fiction and we’re the ones that can change this situation by representing ourselves in our stories.

Writing speculative fiction in general has taught me that the world is saturated with endless stories. The concepts and elements may be limited but the manner in which they come together are never-ending. Horror writing, in particular, I think, teaches us all to look inward and face what scares us, head-on. To take hold of our innermost childhood fears – the monsters that taunted us from beneath our beds – a get to know them ultimately. Sometimes, we learn new things about them, or come to some common understanding about them, but regardless of where the experience takes us, the goal is to unleash those monsters on the world. Why? Because people like to be scared. If they didn’t, there would be no market for rollercoasters.

How have you seen the horror genre change over the years?

So much has changed since I was a kid, not just in horror but with storytelling, in general. I think in horror, it’s most noticeable in film. I recently watched a video of Joe Hill talking about character development. He pointed out how old slasher films were full of one-dimensional, under-developed characters that were hard to relate to. This caused the audience to root for the killer and care little about the protagonist, removing the element of fear. This was the norm in old horror films (though there were obvious exceptions, like, The Omen, The Shining, The Exorcist etc.), whereas over the years, writers seemed to realize that our genre deserves to be well-written as much as any other. I could go on forever about the horror from my childhood, versus horror today, but to me, that’s the most glaring difference.

And how do you think it will continue to evolve?

Very recently, horror has begun to be much more obvious about its social commentary. Though, I believe most good fiction comments on the world around us, I’ve always preferred a degree of subtlety. Moreover, one of my biggest pet peeves in fiction (possibly my biggest) is when a story is sacrificed for something else. In movies, it’s often special effects or gratuity and lately, in all forms of storytelling, it’s been activism. I’m an activist myself. In fact, when I’m not writing horror, I can usually be found fighting with all I have for social justice and while I make a point to include commentary in my fiction, I would never forget to do my best to also write a good story. I’m hoping that in the near future, these two concepts will intersect more often.

Who are some of your favorite Latinx characters in horror?

The Selma Hayek vampire in From Dusk till Dawn was pretty scary.

I would recommend Gabino Iglesias and filmmaker Michelle Nessk. If you get a chance, you have to check out Nessk’s feature movie, O Unilateralis. It’s one of the best found footage films I’ve seen and has haunted me since I watched it.

Don’t sell your souls. Movements and trends come and go, and while piggybacking off them works for some, it’s a joyless path. Write what you want to write, because I promise, if you enjoy the process, your product will be so much better, and if you’re in it for your readers, isn’t that the point?

And to the Latinx writers out there who are just getting started, what advice would you give them?

Just keep it up. If you’re a writer, you know it. You hear the calling and feel the pull of destiny. Don’t quit your job and gamble the mortgage, but don’t give up either. Only five percent of all authors are able to make a full-time living at it, but 100 percent of writers are miserable when they don’t write.