MHI: Life Goes On The Way It Does — How Writing Is My Saviour

“It is as if my life were magically run by two electric currents: joyous positive and despairing
negative—whichever is running at the moment dominates my life, floods it.”

This is my second attempt at writing this. Well, that’s lie. I did write a draft and then didn’t edit it. Because I couldn’t. Not because I didn’t want to. But because I physically couldn’t. Over the past
few months, for various reasons, I’ve felt as though I have fallen down a deep hole, and nothing and no one could pull me out. As I write this, I feel tears at the back of my throat, gnawing away at me, threatening to reach my eyes and spill silently, as they have done for some time. But I promised I would add to it. I don’t always keep my promises, but I intended to keep this one.

Studies have linked mental illness and divergent thinking to a greater capacity for creativity (1), evident in brilliant minds such as Vincent Van Gogh, Ernest Hemingway, Virginia Woolf, and Sylvia Plath. People with bipolar disorder often share common traits such as a tendency for ‘thinking outside the box’ (2 ), the acceleration of thoughts, and a heightened perception of visual, auditory, and somatic stimuli. Though I’d first started experiencing symptoms of depression when I was 12 years old—I was having trouble dealing with my mother’s unfortunate alcoholism and began to self-harm—it wasn’t until 2018 I could put a name to my divergent thinking: Borderline Personality Disorder. It was then I began my almost six-year therapeutic journey.

My first professional short horror story was published in 2015, and since then I’ve enjoyed a steady string of acceptances, amounting to around ninety in both fiction, non-fiction, and poetry. I also
have a Shadows Award, received an HWA scholarship, and am a guest at writing and pop culture conventions. But it’s not enough. Every rejection feels like a slap to the face. Every time I see my peers succeed; I am bitter. I know we can’t always hit home runs, else our victories won’t be as noteworthy. I know what I deem as ‘failure’ is a little speedbump along my writing journey. But
knowing these things doesn’t automatically cancel out my feelings of inadequacy. I still feel like a piece of shit.

In April, I received exciting publishing news I can’t yet announce. And a few days ago, I had a short story accepted in a very popular and respected magazine. It was something I’d chipped away
at for a few months. And even though I’ve been published in the magazine twice before, and included in the ‘Best Of’ anthology, I almost didn’t submit it. To me, it wasn’t good enough. I
wasn’t good enough. Especially not compared to the editor’s own impressive writing career. When I received the acceptance for the story, I’d been fired the week before. And I was feeling incredibly down. I’d just turned 31, and on my birthday, my husband and I had a massive argument, threw around the word ‘divorce’, and I’d stormed out of the house. Thankfully, my daughter wasn’t home. So, I spent my birthday alone. Walking. I left around 6:00 that evening and came back at 8:30. I sat alone in a park and ate a cherry ripe and coke from the local convenience store. I thought about the major publication and the short story. I told myself to snap out of it. But nothing worked. Then, out of nowhere, I thought of my dad.

Two years ago, my dad passed away from cancer. His name was Peter, and he was 53. It was incredibly fast, and I felt so guilty about not seeing him as much as I should have. I remember
saying goodbye to him like it was yesterday. The whole experience was a bit of a blur. I visited my parents and my sister for my 29th birthday. My mum had told me they had some news, and since I lived around 40-minutes away from them at the time, it was easier to tell me then. When they told me, I was so angry. Why would they do this on my birthday? For as long as I can remember I’ve
never liked my birthday. I’d wake up feeling depressed, grumpy, or just ‘bleh’. Then it hit me. This was why. It had all been building up to it. And deep down, I knew.

After my dad died, I found it difficult to comprehend what it meant for him to be gone. If someone asked me about my parents, would I say I had a dad? What did I refer to him as? I am sad because there is so much he has missed and will miss. I am sad because he will never know how much he is missed. The worst part is I’m sad life goes on. Skeeter Davis said it best.

Over the years, I’ve become more open about my BPD, and I’m happy to share the intricacies of the bizarro world inside my mind. I am an absurd person, too blunt, too cold, too bitter, and I don’t
always care about how other people feel. Yet I can be overly empathetic towards the people and things I do care about, and therein lies my eternal dilemma. How should I present myself to the
world? Guarded, or an open book? How much of myself should I put into my writing? And after debating it for years, I realised it was all or nothing.

Right now, I’m still not feeling good. Last week while my husband and I were in the car, I saw a hearse drive by and I burst into tears. And after our fight, it took a few days for my husband and I to
talk to each other. But we’re OK for now. On social media, I described how I’m feeling as having fallen down a deep well. I can see the light above, but I can’t quite get myself out. The last time I
self-harmed was around five years ago. And then I overdosed for the first (and hopefully last) time. The funny thing is there are times I feel so depressed I don’t even have the energy to do anything to physically hurt myself. I can’t be fucked. Instead, I write. Fiction, non-fiction, articles about
gardening. It doesn’t matter. I’m starting a temp job on Monday. I know it will be good for my mental health. But I fear it’s another cog in my wheel of inability to retain employment. I suppose I’m thankful for something which will help me pay my mortgage, even for a while.

There are so many things I can’t change about my life. I don’t know if I can ever fill the hole in my heart after losing my dad. BPD can often feel like a life sentence for something I didn’t do. BPD has been my curse. But my writing is my saviour. 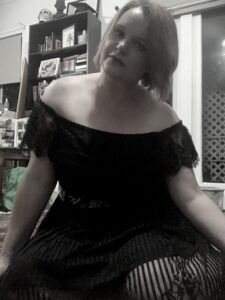 Claire Fitzpatrick is an award-winning author of speculative fiction, non-fiction, and poetry. She is the 2020 recipient of the Rocky Wood Memorial scholarship fund for her non-fiction anthology A Vindication of Monsters – Essays on Mary Shelley and Mary Wollstonecraft and the winner of the 2017 Rocky Wood Award for Non-Fiction and Criticism for The Body Horror Book. Her 2019 debut collection Metamorphosis was received with praise. She has been a panellist at various conventions and is currently working on her dark fantasy novel. She’ll finish it. One day. Visit her at www.clairefitzpatrick.com.au