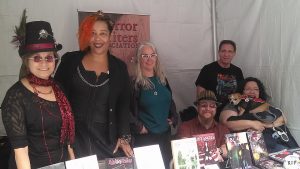 When I get writer’s block, I turn to one of my other creative tools, such as painting or illustration. Back in the fall of 2012, when my father was in the last months of his life, I was too worried to write. I spent hours drawing instead. That’s how I ended up illustrating a couple of short stories. It’s why I am now presenting at comic book and zine centered events like SF Zine Fest, in addition to writing events like ConVolution and BayCon. Not coincidentally, one of my characters, Charlotte Metaxas from Happiness and Other Diseases, is a graphic novelist. Much of the inspiration for the character’s career choice came to me back in 2014, when I visited the Alternative Press Expo.

Charlotte is named after a few literary Charlottes: the Charlotte from the old children’s book Charlotte Sometimes. Fans of the band The Cure may be familiar with her from the song they wrote about the book. A girl named Clare keeps traveling to the past, where she lives in another girl’s body. That girl is named Charlotte. The other literary character is the spider in E.B. White’s Charlotte’s Web. My favorite quote comes from that book. Wilbur, the pig she saves, says of Charlotte, “It is not often that someone comes along who is a true friend and a good writer.” 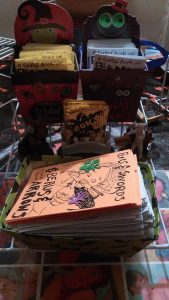 Knowing this, it may not surprise you to learn that I have a large, flexible-legged spider named Charlotte who accompanies me to book selling events. If you visited the HWA San Francisco booth at the Bay Area Book Fair in Berkeley this summer, you may have seen her perched at the top of the display banner. I also have a crow named Eric Draven, a raven named Poe, and a bat named Bela making the rounds with me. There are a series of heavy tombstone book ends, and a coffin shaped wooden jewelry box I keep business cards and buttons in.

As horror writer who frequently tables at local conventions and festivals, either solo, with writer friends,  or with groups like the HWA or HorrorAddicts.net, I spend a lot of time thinking about how to present my wares at a table. Many artists like to present themselves in a very formal way. I am not one of those people. I’m a rather flamboyant person who embraces the perkier side of gothic fashion. As such, I am not at all ashamed to admit that I spend a good amount of time trolling the Halloween section of local stores this time of year

Halloween is a special time of year for most members of the gothic community, when black nail polish and lipstick that are hard to find the rest of the year are for sale. If you have a penchant for the kitschy, it is doubly so. This is when you’ll pick up your Neko cat ears, that special silver glitter with the skulls in it, and a black cat soap dispenser from Walgreens.

That’s why I wasn’t that surprised when I heard a voice calling out to me from the rear aisle of the 99 Cent Store in Berkeley. “Hey, Sumiko,” it said. I turned around to see a friend of mine, Ruby Smith. She is the owner and operator of a local specialty craft jewelry shop called Eyescream on Telegraph Avenue here in Oakland, California. I own a very cool, adorable choker from her shop with a three dimensional skull on it that is a favorite piece of jewelry. Ruby was excited describing all of her finds of the day. One particularly exciting piece was a Day of the Dead bobble head mariachi. Naturally, I acquired one. From there, we went into a lengthy discussion of how to use stacking items like portable shelving units to create three-dimensional space on display tables, and how to inexpensively light them. 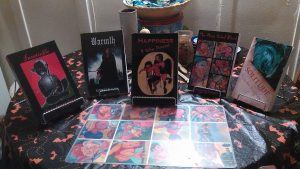 There are several horror authors who I am friends with here in the San Francisco, including Bram Stoker Award winner Rain Graves. Rain is a goth, and the goth scene is really close. She ended up writing the forward for my novel, “Happiness and Other Diseases.” We met through a mutual friend on the goth scene, Serena Toxicat, also a writer. Danielle Willis writer from the San Francisco goth scene. So is Emerian Rich over at HorrorAddicts.net.

Among them, Emerian is the most enthusiastic when it comes to cutesy chatchkas. She shares my penchant for zine making. We both make tiny books, tiny comics, and tiny coloring books for local events. Tiny merchandise requires tiny displays. I was really excited to find a couple of pieces to display my magazines in. Two of them are small candy boxes, featuring a ghost and a witch, respectively. The third is a tiny ceramic bridge with skulls on the post.

I have to say, though, my favorite piece of the year is something to complete my collection of portable artificial animals. It’s a big, scary looking plastic rat. I think I’ll name him Templeton. On second, thought, I think I’ll go with Ben, from Willard. 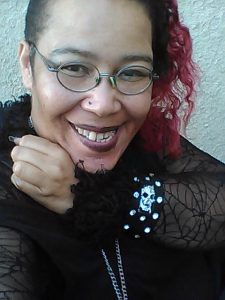 TODAY’S GIVEAWAY: Sumiko Saulson is giving away a signed paperback copy of Happiness and Other Diseases (with foreword by Bram Stoker Award winning horror writer Rain Graves). Comment below or email membership@horror.org with the subject title HH Contest Entry for a chance to win.

Sumiko Saulson is a science-fiction, fantasy and horror writer. Her works include 60 Black Women in Horror Fiction, Solitude, Warmth, The Moon Cried Blood, Happiness and Other Diseases, Somnalia, Insatiable, Ashes and Coffee, and Things That Go Bump In My Head.  She writes for the Oakland Art Scene for the Examiner.com, SEARCH Magazine and horror blogs HorrorAddicts.net and SumikoSaulson.com.  The child of African American and Russian-Jewish American parents, she is a native Californian who grew up in Los Angeles and Hawaii. She is an Oakland resident who has spent most of her adult life in the San Francisco Bay Area.

Happiness and Other Diseases by Sumiko Saulson

Synopsis: Happiness and Other Diseases is a dark fantasy based in Greco-Roman mythology, the Demos Oneiroi, world of dreams, and the children and grandchildren of Somnus, god of sleep. Flynn Keahi has had a rough year. His nightmares are starting to manifest in reality, but no one believes him. Terrifying creatures are trying to cross out of dreams into the physical realm. Only Flynn can stop them – but doing so might cost him his life. Complicating matters further, one of these creatures cannot help wanting him — in every forbidden way. Will she be able to save him from his fate? Can she even protect him from herself?

“From page one it is captivating, pulse-raising, and makes you question your own sanity; it’s a complete page turner! Ms. Saulson plays on every fear we have in our dreamland and in our reality.” – Buffie Peterson

“Take a dash of Toni Morrison, a healthy dose of Neil Gaiman, and take a trip down Clive Barker Street and you get a taste for what this experience is about. – Jim Fahs

“Happiness And Other Diseases by Sumiko Saulson is a tragic love story that includes dark humor, Greek mythology and some moments of pure horror.” –HorrorAddicts.net

“Happiness and Other Diseases touched my heart, then ripped it out through my chest, but I was begging for it, and I’m ready for more.” – Josh Bisher 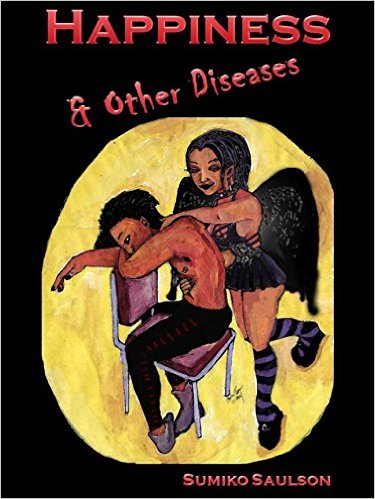 Read an excerpt from Happiness and Other Diseases by Sumiko Saulson

Just like in every previous nightmare, it materialized suddenly, out of thin air. One moment he was looking at his own dog-tired mug in the mirror on the bar back, the next he was staring into the gaping maw of whatever it was that terrorized his dreams. It rarely took the same form twice. This time, it was shadowy and semi-translucent. It had withered legs and arms resembling the gnarled branches of a lightning-struck tree. They were almost humanoid, yet woefully emaciated. The creature was straddling his lap, facing him, with its talons resting on either side of his shoulders.

Flynn gasped as he felt its claws sliding effortlessly into the flesh of his right shoulder. He felt a hot gush of blood flow out of his wounds and then slowly trickle down the back of his white t-shirt. He would have screamed, but he knew from experience no one in the bar would hear him. His breath came in ragged, gasping pants as he struggled to maintain his composure. That creature knew it was hurting him, but Flynn didn’t want it to see him sweat.

“So,” he hissed under his breath, “The last time you showed up as a foxy-looking redhead. You aren’t bothering with pretenses this time I see?”

“This isn’t my true form, either,” the thing cooed back, leaning over and licking the side of his face with its wide, green tongue. In the mirror Flynn could see a thick trail of snail-like goo on his face where its saliva touched him. Its breath was mossy and tepid, but not entirely unpleasant. It smelled like the inside of a cave on a camping trip he remembered from childhood. Without wanting to, he found himself relaxing into the short leather back of the barstool. He felt warm and a little dizzy, but he knew it wasn’t the alcohol.

One comment on “Halloween Haunts: Cheapers Creepers by Sumiko Saulson”