Mr. Moose haunted our house at Halloween during my high school years. My youngest brother, who was seven at the time named him, and the name stuck for his once-a-year roll out on Halloween eve.

He was a response in some ways to a notable falling off in the spirit of Halloween in our town. It had become an excuse to go out and round up as much candy in the shortest time possible. Many of the kids, particularly the older ones, didn’t even wear costumes.  Even if they did, there was very little creativity in them. A sheet with two holes cut for eyes was the best they could do for a ghost. A cheap, dime-store mask was all it took to be a ghoul. It was as if the treat part of the ritual was theirs by right, which they garnered simply by showing up. We decided as a family to make Halloween a little more memorable than that.

Hence Mr. Moose. He started out as one of my father’s old suits which we stuffed with a couple of pillows and then padded with wads of newspaper. He was propped up in a big arm chair that we moved out on the front porch from the living room. The head was rubbery Frankenstein’s monster mask that was a ghastly green in color. It, too, was filled with enough wadded up newspaper to give it shape. A beat up black fedora (this was during the day when men still wore hats) was pulled down low on Mr. Moose’s forehead, so you caught a glimpse of the face but not enough of it to be sure that it was only a mask.  Black knit  gloves, filled this time with cotton, extended out the sleeves of the coat and were held in place with safety pins.

Our house was set well back from the street and the trick-or-treaters had to traverse a long sidewalk to get to the front porch where the candy was. The chattering and squeals of laughter usually dropped off by the half way point as they became aware that Mr. Moose, huge, motionless and ominous, was waiting to greet them in one corner of the porch.

Inside the open front door stood my mother, dressed in a black conical hat and a tattered old black cape she had found at Goodwill. She streaked her face with some kind of purplish mascara that in real life must have been reserved for women who worked in bordellos, and the lipstick that coated her lips was a dark crimson. There was no doubt in the children’s minds that there stood a witch. Her occasional low, blood-freezing crackle was the clincher.

To get close enough to get the candy, they had to pass by Mr. Moose, whose very motionlessness had a terrifying quality about it. I was crouched out of sight above the porch, and just as the kids reach her, I’d pull up on two nearly invisible fishing lines attached to Mr. Moose’s sleeves. His arms would rise menacingly and I’d let out a roar from overhead, matched by a terrifying cackle from my mother.

The children would run screaming down the sidewalk back to the safety of the street. Some of them, dropped their bags of candy along the way, and were too frightened to return to retrieve them.

During Mr. Moose’s lifespan, word got around and the number of trick-or-treaters dwindled with each year. He was just too frightening for the mostly younger kids who trick-or-treated on our street. Perhaps what we did wasn’t very nice—I’m sure some of the children had nightmares afterwards—but it certainly was in the spirit of Halloween, which after all, shouldn’t be too sanitized or tame. If there was any punishment due to us for inflicting a little fear, it was the stomach aches we all suffered from consuming the candy that wound up not being given out.  There was always a surplus because of Mr. Moose. 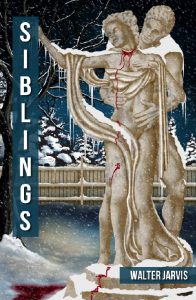 Walter Jarvis lives and works in Los Angeles. His first novel, The Fleshing, was published in 2013. A second novel, Siblings, is scheduled to be published in the fall.

Victim of an abusive husband, Jenny Lethko seeks sanctuary in her brother and sister-in-law’s house, a huge edifice known as the Donner Castle which is being restored to its former grandeur. What none of them know is that her presence will awaken the evil spirit of a long-dead woman whose unnatural attraction for her own brother, victim of a murder-suicide, and  her thirst for revenge against the descendants of those she blames for bringing about his demise, has the power to destroy them all.

Available this fall from Post Mortem Press at  www.postmortem-press.com or from Amazon.

Read an Excerpt from Siblings