Peekaboo with the Devil: Strategies for Hiding and Revealing Your Antagonist 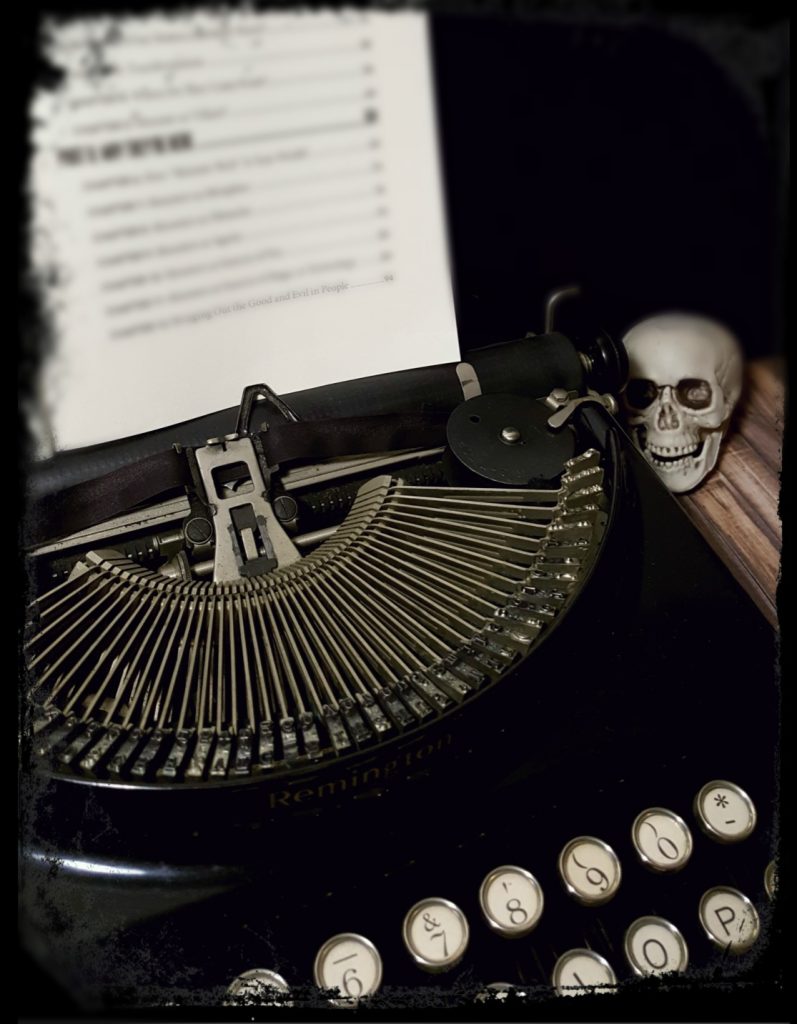 Just like any relationship, the special bond between a horror protagonist and her antagonist benefits from a little bit of mystery. In this case, the hero is a proxy for your readers, and the mystery comes from your story’s scariest villain, be it a human serial killer or a demonic creature or the mad scientist who, when left unattended for a few minutes, will inevitably create a horrific zombie plague.

There are a host of reasons why keeping your baddie cards close to your chest can help your story’s tension and overall terror levels. Obviously, if your plot line is even remotely similar to a mystery, you don’t want to give away the killer in the first act. You can stoke the tension by keeping your villain shrouded.

There are also many reasons why a less visible villain is scarier. For suspense reasons, if your hero doesn’t know when it will strike, or where from, then he must always be on guard, and your reader on edge of seat as well. A less defined villain also enables the readers to fill in some details for you, and they will inevitably pick whatever they personally would find the most threatening. So, pick only your distinctive traits to make your evil specific enough to be feared, then let readers scare themselves.

The monster in the shadows also enables you to make a tougher antagonist by concealing its limitations and weaknesses. Be careful not to overplay your hand here, though—a monster who is obviously hiding her limits only draws attention to the fact that she has them, and therefore the heroes can defeat her.

By not revealing all, you avoid the familiarity that contempt breeds. Imagine a Mysterious Horror Meter, a gauge that lowers a little more each time your hero encounters—and survives—your primary antagonist. Each of your heroes’ survivals count as victories, and the more victories they collect the greater their confidence grows. As their confidence and likelihood of logical success against the antagonist grows, the readers’ fears for them inversely drops. The easy solution is keeping your big bad hidden, and only strategically deploying him for maximum effect.

So, what are some tactics to consider in hiding and revealing your personal demons?

The most obvious is gradual exposure. Start your hero and readers in the soup pot of horror, then turn up the terror temperature gradually, with a glimpse here and a sign there. Each new hint or encounter must make your big bad more dangerous, more deadly. Start with creepy, then insinuate greater and greater threat until you hero has no choice but to face it or curl up and die!

Another way that you can limit direct exposure is through servants, minions, and lesser creatures. Frequently, middle-grade uses these for the extra victories (read: hope and safety) over them. These representatives offer your protagonist a taste of what’s to come when she finally must face the main villain. But inherent is another balancing act. These secondary villains must create rising tension, and—without undermining the threat of the monster—their downfall at the hands of the hero must be feasible. After all, the strength of one’s minions reflects back upon them, and smarter villains entrust smarter hench-demons for important tasks.

But not every plotline and monster lends itself well to being totally obscured. If you need a more accelerated pattern of visibility, you have options. One is to give a first clear exposure of the monster at a time when the hero is not on its radar. Allow the hero, like the readers, to observe what this villain is all about (and the “what” in question should be terrifying). For an example of an iconic protagonist-bystander villain reveal, look to the 2001 survival horror video game, Silent Hill 2, and the introduction of the infamous Pyramid Head monster.

The first glimpse of Pyramid Head is easy to miss, but the second encounter is a video sequence (cut-scene), and that was where the monster made a name for himself. With a content warning both for violence and subject-to-interpretation, non-graphic, implied possible sexual violence, in this scene the protagonist hides in a closet and witnesses the menacing monster brutalizing the other unholy creatures that the player’s been fighting against for her digital life.

That the monster is casual in its acts, rather than performing to scare the protagonist, denotes strength, power, and a diabolical nature. Just as players spend the rest of the game running away from Pyramid Head (until the unavoidable final battles), your reader will want your hero far away from your big bad. Be sure to scale the monstrous acts to a level age-appropriate for your target audience.

Don’t limit a sadistic villain to big displays, though, especially if she is an antagonist that the plot needs to have a greater presence throughout the story. If handled carefully, a monster can go so far as to directly taunt the protagonist. First, you must decide if the antagonist doesn’t take the hero seriously and the taunting comes from a place of amusement (to be followed by the point eventuality of the antagonist finally taking the hero seriously, which will need a trigger), or if the villain is simply the type that feeds on causing fear (to be followed by the point when the hero must face and overcome the worst that you can throw at him).

Make sure, though, that a fear-eater is never petty, and a mocker never weak. The success of your sadistic villain depends entirely on the strength of her characterization.

And on the subject of characterization, be careful to never overdo a big bad’s backstory. The backstory of your monster is need to know information only—you should know it inside out, but keep as much of it from your heroes as possible, only giving them enough information to find a way to defeat it (unless your heroes lose in the end). Employ multiple readers if you must to determine if you give enough information to satisfy, but err on the side of caution. The “Why”s of the universe—be they why a killer kills or why a monster was born—are a bit scarier if we can only guess and never confirm the answers.

There are exceptions, of course. A genuinely tragic villain needs more backstory (a whole other post). And familiarity-breeding-contempt is a great for secondary antagonists or bait-and-switch baddies, the kind that trick others into thinking they’re harmless (maybe even helpful), lulling the protagonist and readers into a false sense of security and then striking while everyone is watching the flashier villain.

There is no definitive right or wrong way to handle your villain reveals—it all depends on the specific characters and plotline. But by thinking strategically to avoid evil overexposure, planning and executing a rise of tensions, and purposefully balancing your various threat-meters, you’re on the path to doing a good job with a bad guy.