Jewish Heritage in Horror Introduction by Maxwell I. Gold 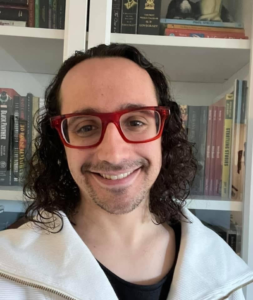 Maxwell I. Gold is a multiple award nominated author who writes prose poetry and short stories in weird and cosmic fiction. His work has appeared in numerous anthologies and magazines including Weirdbook Magazine, Space and Time Magazine, Startling Stories, Strange Horizons, Tales from OmniPArk Anthology, Shadow Atlas: Dark Landscapes of the Americas and more. He’s the author of Oblivion in Flux: A Collection of Cyber Prose from Crystal Lake Publishing.

He’s a proud Columbus, Ohio native and currently serves on the Board of Trustees for the Horror Writers Association as the organization’s Treasurer.

My Kehilla, My Community

Not everyone has experienced Jewish culture in the same respect from birth to death, and I do not wish to cast any shadow of assumption. Though, one truth I’ve come to understand that we, in the Jewish faith all have in common, is community. This is also a supremely common trait I’ve come to realize that persists in the speculative fiction community.

In Hebrew, the word Kehilla [kuh-hee-lah] comes from an Ashkenazic Hebrew word meaning congregation. Congregations like communities, are places where people can commiserate with those who are like-minded and not only that, but they are also families. Families for those without, homes to welcome and embrace, and retreats from a world that seeks to assimilate.

I wanted to not only explore community, but the idea of plurality. I never asked the question when I grew up, nor did I think a collective conscious was something too far-fetched though being Jewish was never a question of me or I. It was always we, us, without a second thought and I didn’t think otherwise. Every Jewish person I met and discussion I engaged in as it related to culture, customs, or anything like that, always began with ‘we.’

Why is this important and how is it relevant to speculative/ horror fiction?

Community is a term that’s tossed around quite frequently in the horror world. Arguably to the point of it feeling a touch cliché at certain moments, however, the feeling of community, a congregation where people can come to be their true selves is more important than ever. As a child, the congregation I attended, and my family were those places and I never thought I’d find a place like that again. Somewhere where I’d have people to lean on, to vent, to cry with, and laugh, and share experiences that bring me closer to them as time goes on.

We’re living in a time of consistent, almost uncertain anxiety mixed with conflicts that appear endless, political battles that threaten to upend our most basic human rights, and the list continues to grow. Despite all the woes that pile higher and higher, the cliché of community feels more important than ever and the people who dwell in our Kehilla, are those we need to keep close.

I remembered a conversation with a rabbi I had right before my bar mitzvah when I asked him about this conundrum, ‘why us? Why do we speak in us?’ And he looked at me with a half-smile and instead of giving me some convoluted answer drenched in religious dogma, he simply said, ‘because we are all of us, together.’

We are all of us, together. And that stayed with me for a long time. We are all of us, together, no matter if we’re Jewish or not, and specifically in this horror community, I saw this as a way to find my Kehilla. There’s not one singular answer to why community is or isn’t important, but I do believe that it’s something that keeps us together and will only make us stronger.

For the many who do not live inside the tribe, there’s a great misconception around the idea of Jewishness. It’s more than a set of beliefs, or a trip to the synagogue on Friday nights, or a faith-system, but it is simply a history. A connection that has pulled us together over thousands of years to our kehilla. The community where we are all of us, together.

So, what does this have to do with horror? It’s no different. There’ve been a great many Jewish horror writers throughout history who’ve contributed to the genre, from R.L. Stine to David Cronenberg and those who’s interviews you’ll read who are doing the necessary work. The horror community is an inclusive space, doing more than producing books and tomes for the masses to consume, but creating a world for all of us, Jewish or not, to be, together.

It is my hope that as we celebrate Jewish Heritage Month this year, we can look forward to creating not only sturdier, more inclusive communities for Jewish people, but for the horror community and to step into the future, together.

One comment on “Jewish Heritage in Horror Introduction by Maxwell I. Gold”