“Sit down, girls. We’ve got something serious to talk about.”

My younger sister and I sit cross-legged on the scratchy brown carpet of our tiny apartment as Mom and Dad sit on the couch. Barely four years old, my sister Danielle yanks on the hair of her doll as she alternately slams it against the floor to what is surely the dismay of our new downstairs neighbors. I sit upright and listen. My mom’s normally moon-like face darkens as she speaks. My father slumps backward, reading his newspaper. I’m just grateful he isn’t screaming, cursing or swinging his meaty, stinging hands at my face.

Mom holds up a book, The Late, Great Planet Earth by Hal Lindsey. “The world is coming to an end, girls, in 1988. Jesus will come back — but not until after the Antichrist brings the Tribulation.” Her cerulean eyes gleam with zeal. I learned the word “cerulean” from my crayon box.

“The Antichrist?” My heart beats faster. I love the monster movies every Saturday on the Million Dollar Movie. Surely this must be the best sort of monster if he scares my mom.

“He’ll be a dark-skinned man from the East. Probably Saddam Hussein or that Kaddaffi,” she sniffs.

At this point, it’s clear this is really just a talk between my mom and me. My dad sighs heavily and rattles the newspaper. He then gets up and goes to the bathroom.

Her eyes narrow. “The Antichrist is coming from the Middle East to destroy Israel. He’s going to make us all take the Mark of the Beast or else cut off our heads. You won’t be able to buy or sell without The Mark.” She brandishes the open book to show us a crude drawing that looks like a barcode would be painted on our foreheads. “If you take The Mark, Jesus won’t take you when he comes back.” She eyes me specifically. “No daughter of mine is going to take the Mark.”

I decide I don’t want the Mark, either, especially not on my head. My headgear looks bad enough.

A few weeks later, men in drab overalls wheel into the apartment bulky boxes filled with dried goods. Milk. Corn meal. Peas. Spinach. Wheat. Even pudding. (Ew.) They stack these astonishingly heavy, uniformly sized boxes in every closet and even stuff them under my parent’s bed. My mom is unpacking a huge ruffled sheet she bought to place under the mattress. It’ll hide the boxes behind a low curtain of fabric. In the room of bunk beds I share with my sister, our clothes now fight the boxes of dried goods for room to hang.

As I lament the state of the closet, my mom enters and rests her hands on her hips, round belly sliding forward. “Do not tell anyone about this food. Especially your friends.”

“Because someday when the Antichrist comes and you can’t buy or sell, they will kill you for this food.”

“But Mom, they’re my friends! They wouldn’t kill me!” The girls in my Bluebird troupe. My friends at school. The kids at temple. None seem like the killing type.

“That’s what you think. Your grandmother says, ‘Friends are snakes.’ Just remember that. By the way, your father will be home in a while.”

My two other Jewish friends, Jill and Seth, are brother and sister twins, and suspiciously blond for Jews. My mom says they’re German. Weren’t the Nazis who mutilated my Uncle Ike German? It doesn’t add up, but I love playing with Jill and Seth, especially make-believe in the apartment pool. I play Queen Mermaid and they are my envoys that I send on diplomatic missions to the Deep End, where I’m afraid to swim.

Jill and Seth’s sweet mom has a wrinkled apple face and frizzy curled hair. She lets me into their apartment. The siblings immediately emerge. Today they are gearing up for Halloween – yet another pagan holiday we are forbidden to celebrate. This one, however, is the worst holiday of them all. My mom often rants about the Satanic overtones of Halloween, how it emphasizes witchcraft, ghosts and Democrats.

“Hi!” they both shriek. “Come here and see what we got!” Four spindly arms pull me into their bedroom with its two small twin beds. Barbie dolls and Tonka trucks are piled in a toy box that sits against the far wall.

“We got our Halloween costumes,” Jill announces. She proudly shows me a flimsy cardboard box with a cellophane cover to display the mask of the costume. The eyeless face of Jeannie from the television show I Dream of Jeannie bulges against the plastic. That’s our favorite show, along with Bewitched. I love how Jeannie calls the astronaut “Master.” It makes me feel swooshy inside. Seth is going to be a gorilla, which is hilarious because Seth has toothpicks for arms and legs. He slips on the mask and lopes around the bedroom making monkey noises.

I feel badly for them because they don’t know what I know. I break the bad news.

“You know, if you celebrate Halloween, the Antichrist will get you.”

Jill’s small grey eyes widen. “The Antichrist? What’s that?” This gets Seth’s attention. He stops making monkey noises and listens.

“Well,” I say authoritatively, “he’s this big evil man from the Book of Revelation in The Bible. He’s coming to destroy Israel, take over the world, and make us wear barcodes on our foreheads! And anyone who won’t wear a barcode on their forehead will have their head cut off.” I make a snick motion with my index finger. “Like that!”

A moment of silence passes. Jill fingers her cheap costume box reluctantly. “I guess you’re right. I don’t want the Antichrist to get me.”

“Me, neither!” said Seth’s monkey face. He yanks off his mask and throws it across the room. His eyes are moist.

Sobbing, Jill runs to the kitchen and stuffs her costume box in the garbage can. Within moments, both brother and sister are bawling, hands wiping away tears.

They ask me to describe the Antichrist. I tell them that he looks like Ricardo Montalban but angry and chasing people around with a massive rubber stamp that applies the barcodes.

Jill cries even harder now. “But I like Ricardo Montlebanno!”

I feel really bad. My face heats up. Jesus has upset my friends and made them throw away their neat costumes. I take Jill’s frail white hand in mine. “It’s okay,” I tell her. “When the Tribulation comes, you can have the food in our closet. It’s not very good but we’ve got a lot of it.”

Maria Alexander is a multiple Bram Stoker Award-winning author. She’s also a nominee of the 2017 Anthony Award for Best Children’s/YA Novel for her Bram Stoker Award-winning YA novel, Snowed. When not finding humor in her ridiculous religious upbringing, she studies Japanese swordsmanship and writes Doctor Who filk. She currently lives in Los Angeles with two ungrateful cats, a Jewish Christmas caroler, and a purse called Trog. For more information, visit her website at www.mariaalexander.net. 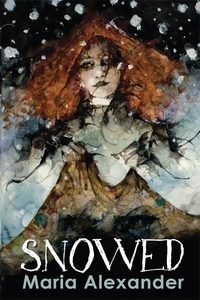 Charity Jones is a 16-year-old engineering genius who’s much-bullied for being biracial and a skeptic at her conservative school in Oak County, California. Everything changes when Charity’s social worker mother brings home a sweet teen runaway named Aidan to foster for the holidays. Matched in every way, Charity and Aidan quickly fall in love. But it seems he’s not the only new arrival: Charity soon finds the brutally slain corpse of her worst bully and she gets hard, haunting evidence that the killer is stalking Oak County. As she and her Skeptics Club investigate this death and others, they find at every turn the mystery only grows darker and more deadly. One thing’s for certain: there’s a bloody battle coming this holiday season that will change their lives — and human history — forever.

Will they be ready?

Find out how you, Charity, me, everyone…has been Snowed.