On behalf of the Horror Writers Association, I would like to extend our deepest condolences to the friends, family, and fans of Valjeanne Jeffers, and to her longtime boyfriend, poet Quinton Veal. Valjeanne was a proud member of the Horror Writers Association, a warm presence in the horror writing community, and on the speculative fiction convention circuit. 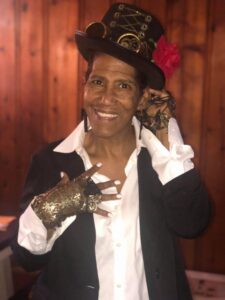 Her contributions to the horror genre were many, including her werewolf series The Immortals, and short stories appearing in numerous horror anthologies, including Black Magic Women, Slay: Tales of the Vampire Noire, and the Bram Stoker nominated Sycorax’s Daughters. She deftly combined horror with, crime noir, and cyberfunk in her series Mona Livelong: Paranormal Detective. She was an important figure in the cyberfunk and steamfunk genres, which combine Afrofuturism and Afrosurrealism with cyberpunk and steampunk respectively. She was groundbreaking as a woman in Steamfunk genre, appearing in many key anthologies alongside names like Milton Davis and Balogun Ojetade

Valjeanne was part of the Horror Writers Association’s 2022 Black Heritage Month interview series. She was already sick by then and asked if I could interview her over the phone rather than by email. I told her it would be my honor to do so. You can read her interview here:
https://horror.org/black-heritage-in-horror-an-interview-with-valjeanne-jeffers/

Valjeanne was a beloved member of the Black Speculative Fiction community, and a mentor to many of us. She positively affected so many lives that many of us are grieving today. She was a bright light who had a smile and a word of encouragement for everyone she met. May she Rest in Power as we count her now among the Ancestors.

2 comments on “In Memoriam: Valjeanne Jeffers”