Black Heritage in Horror: An Interview with Valjeanne Jeffers 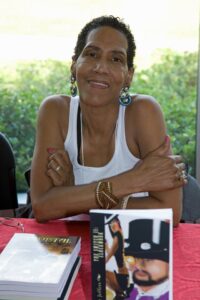 Her writing has been published in numerous anthologies including: The City: A Cyberfunk Anthology; Steamfunk!; Luminescent Threads: Connections to Octavia E. Butler (winner of the Locus Award, nominated for the Hugo award); Fitting In; Sycorax’s Daughters (nominated for the Bram Stoker Award); 100 Black Women in Horror; Black Magic Women; The Bright Empire; Black Celebration, All The Songs We Sing; Blerdrotica Volume I, and Slay:Stories of the Vampire Noire. Valjeanne is also the screenwriter of the pilot script The Switch II: Clockwork, and was chosen as a finalist by the Peachtree Village International Film Festival and a quarter finalist by the Atlanta International Screenplay Awards.

I actually started writing poetry, before I started writing fiction. I was really more of a reader. I didn’t envision myself as a writer. I remember I’d spend my last dollar for a Tad Williams or a Stephen King novel. I would devour them. I was a huge fantasy and sci-fi reader. Then I discovered Octavia Butler, Tananarive Due and Nalo Hopkinson. The catalyst for me was Octavia Butler’s Wild Seed. It just blew me away. She was the first black writer that I encountered who wrote sci fi and fantasy. I devoured all of her novels, all I can find. And after that when I came across Tananarive Due and Nalo Hopkinson, two more black speculative fiction writers, I started to think maybe I can do it, too. And that’s what inspired me to move from just being a reader to becoming a writer.

I was actually writing horror before I realized I was writing it. In my Immortal series, there are some scenes that are very frightening. Sometimes I even scare myself. I would be writing and I’d keep myself up at night. Then, Sumiko Saulson reached out to me for an interview for the book 60 Black Women in Horror, and that’s when I realized I was writing horror. Once I realized that I could do this, because Immortal is more of a blend of horror and fantasy, but once I realized that I could do this and I was skilled at it, I decided to go all out. And that’s when my series Mona Livelong: Paranormal Detective came into being. There are three Mona Livelong novels, and I am working on the fourth one now.

I really don’t have to. It just comes about naturally, because even though I am creating alternate worlds, alternate universes, I am writing what I know. I am writing coming out of the Black community, and writing about other cultures that I come into contact, and so it comes natural to write about the African Diapora. I was just listening to my steampunk horror story “Outcast,” which was produced by Black Women Are Scary. And it’s interesting listening to your own writing. As I listened to it, I realized this comes from my experience, from our experience, our ancestors, our culture and our traditions. It has elements of voudon, factual elements of the Haitian revolution.

All writing is transformative, to quote my sister Honorée. And it’s cathartic, so within a genre, you are tapping into pieces of yourself. I have learned to tap into things within me, even things that are uncomfortable and frightening such as trauma and things that are going on in the world right now.

You know, one thing about it that I am seeing is more people of color portrayed on screen and tons of black horror authors out there, some indie and some traditional. There is more representation; there more black people, more Native American people, more Asian people. And even to the LGBTQ community, there is more representation. We are represented less as sidekicks, and people who get killed in the first ten minutes of the film. We’re in the forefront. And I think that’s going to continue.

We have more representation than I have ever seen in my lifetime, in the horror genre. And I think it is going to get better, and there is going to be more representation. I am going to mention Candyman. I mean the most recent Candyman, Candyman four, because I wasn’t fan of the first two. There was more representation in the new one in terms of who was at the forefront, who was more important, and who died in the film. As a black woman, that’s really important to me. I don’t want to watch something where the only black character is the one that dies.

The characters in Candyman, in Lovecraft County, Watchmen, and the characters in Raising Deon, a new horror/fantasy series. I love Get Out, that movie blew me away. I was not expecting anything that happened.

I dig Sumiko Saulson, I dig Linda Addison, that’s another one. Brandon Massey is one of my favorites. And of course Quinton Veal – we were both just in Blerdrotica 2. Lori Titus, Octavia Butler,Tananarive Due and Nalo Hopkinson. Octavia Butler is a sci-fi writer, but when you read Wild Seed, it kind of crosses over, because when that guy loses a body he picks up a new one. He just eats through people. He’ll get a body, eventually it wears out, and he’d just trade it in for a new body. That’s horror. He had whole communities he just ruled because people were afraid of him.

I would advise them to write what they know, write what they feel. I am not saying don’t push
yourself, but write what makes you feel good. Write for yourself, not what you think others want, and your audience is going to find you. I think it just holds you up when you try to figure out what others want to read. Forget that – what do you want to read? Write that.

Just keep writing. Don’t give up no matter what anyone else says. Read other writers in your genre, you’re not trying to copy their ideas, but it just stimulates the juices, I think.