When I was a kid, my mom always went with us trick or treating and only to our friends’ and family’s home. Why? Because who knows what evils could be lurking within the chocolate of a fun size snickers bar and because the lines at the ER where the police set up free candy X-rays were massive time suckers at the end of a rather exhausting evening.

I always imagined some nefarious witch or creepy old man sneaking razorblades and pins into candy bars. Sitting at their workshop bench, wearing a watchmaker’s loupe so after embedding the torture device and remolding the chocolate to look intact, they had to put the wrapper back on perfectly to evade detection. All this work they would do for the anonymous thrill of cutting a child’s lip or gums. Or we were to believe some poor schmuck might actually swallow the thing in one piece and die of internal bleeding?

With the remake of Candyman this year, I had the opportunity to revisit that old fear. Candyman’s immortality, his existence even, is at the mercy of urban legend. “I am the writing on the wall, the whisper in the classroom! Without these things, I am nothing.” And like this fictional monster, so are the strangers who tamper with children’s Halloween candy.

But there are so many urban legends, so many stories told in whispers at sleep overs, around the campfire, and just as many documentaries and reality shows to keep them alive. Yet do any continue to elicit the regular and expected reaction from parents and authorities as tampered Halloween candy?

“I am rumor. It is a blessed condition, believe me. To be whispered about at street corners; to live in other people’s dreams, but not to have to be. Do you understand?” To not have to be—is this true for the witches and creepy old men of Halloween infamy? Have there been cases to bolster our fears? Make police and x-ray technician overtime worth the money? Are there people out there trying to hurt children but only on Halloween and only very mildly and only in a way that they never get to witness the fruits of their labors?

I tried to find actual statistics, as there are plenty of news sites and police warnings about tainted candy, but there are none. Joel Best, in his book Threatened Children (1990), performed his own study through newspaper articles from 1958 to 1989. He found seventy-eight reported cases with two deaths. On further investigation, he discovered that the two deaths were caused by family members and the others were minor injuries or hoaxes. In summary, there were no instances in which an anonymous stranger caused actual harm or death. Yet, practically every year since the 1970’s the reminders to check your children’s candy by both news media and police appear in the papers, on TV, and now, social media. But it continues to be word of mouth, “rumors…whispered about at street corners” during a time of year when creepy, frightening stories are most believable, that has rocketed Halloween sadism to the top of the most respected and feared of urban legends.

This legend has embedded in our collective conscious in a way few others have. The addition of the Halloween holiday, when the veil between belief and disbelief is thinnest, lends a credence few urban legends can match. After all, don’t you hesitate a little when you see a small defect in the chocolate coating of a candy bar you unwrapped? Just in case. Just in case some anonymous Candyman is looking for their next victim to “…give them something to be haunted by.” 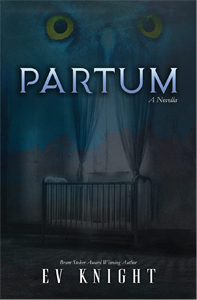 into rabbit holes of suspended disbelief. When you’ve been personally affected by something traumatic and you’re looking for answers, like Lena Fitchett in my newest novella Partum released this month, the internet can be the answer to your prayers for the fodder of madness. Pleas enjoy this excerpt from Partum:

Dr. Preston’s office is in the basement of her home. Descending the concrete steps to the locked door always feels like descending into Hell to be judged for all my sins. I press the buzzer and wonder why she never seems to have another client. At least I’ve never seen one. The door clicks, and I enter the familiar yet unwelcoming space I’ve come to loathe.

“Hi, Lena. Come on in. Let me just grab my notes, and we’ll get started. Can I get you anything? Water? Tea?”

I take off my shoes, jacket, and drop my purse beside the coat-rack before entering the carpeted consultation room. The only light comes from two windows near the ceiling behind her desk and a large floor model salt lamp that sits in a corner created between a couch and a big overstuffed chair. Dr. Preston always sits in a sturdy wooden arm chair upholstered in red and gold brocade with a small side table that swings in front of her. She puts her tea and folder on it but never seems to take any notes.

I pass the bookcase lining the walls. There are no books in it, though, just antique medical equipment—instruments from old asylums that look more like torture devices than professional tools. I know the one that looks like an ice pick is for lobotomies, but the one that looks like a tiny ice auger makes me shiver. I shuffle past the case of medieval punishments and choose the couch, because that was the seat I took the first time I came. Although I really want to sit in the comfy chair, I feel as if I should stick with the choice I made before. There are throw pillows and an afghan on both the couch and the chair and an electric fireplace which I think is to make you feel comfortable, like a guest.

But the art gives away the ruse. All the art in the room is abstract. Meant to make you think, meant to draw your eye and begin to question what it means to you. Dr. Preston never gives you the answers. It’s a test.

I never pay much attention to the ombre painting in autumn hues or the one with all the circles and spots. It’s the bone-white sculpture on the mantle that distracts me. Is it bone? The curves and twists of various widths make me think no, but that might mean it’s not bone of this earth. There are very tiny bones in the inner ear with the strangest curves and shapes, so who’s to say? I wonder if Dr. Preston only puts that piece out when I am coming, as if she knows or maybe she is sending me a message that she does know.

Dr. Preston sits down and opens my folder. “What’s on your mind today, Lena? You seem pensive.” She stirs her tea but does not take her eyes away from me.

I could ask her what the sculpture is made of but I don’t because I know she wants me to. Instead, I shrug. “Same old, I guess.”

“I was hoping today, we could go back to the time just after Bridget was born. I know we talked a little about that when you first came in, but I’d like to go back and talk about your depression at that time.” She sips her tea. I wonder if it is herbal or decaffeinated—she is so calm.

“Lots of women get postpartum depression. It’s very common,” I reply. What does it matter now? Bridget is dead.

“Yes, you’re right, and there is nothing to be ashamed of. It’s so hard to be a first-time mom. Heck, I guess it’s hard every time.” She laughs but there’s no smile in it.

“Bridget was born five weeks early and that made her colicky. I never slept.”

“You’d mentioned that. Did CJ help you at all? I mean, during the nights at least.”

“No. CJ was on night shifts. He didn’t take time off because he wanted to save his vacation days for summer when Bridget wasn’t so fragile. We were going to fly to California to visit his parents.”

“Surely he had days off?”

He did, didn’t he? I must have slept at some point. I just don’t really remember. Those days blurred together. I say nothing. I shrug.

“How long did she suffer with colic?”

“Months. At least two, maybe three. We’d just got into a better sleeping routine when she…” I don’t finish. Dr. Preston already knows.

“I can’t image the stress of all those sleepless nights, alone, with a baby that wouldn’t stop crying in addition to all the hormonal changes associated with the postpartum period.”

I look up at her, searching her eyes, her face, for a tell that says she is insinuating that I killed my baby. Wouldn’t she be something, then? Local Therapist Cracks Mysterious Death of Four-Month-Old: The Mommy Did It!

“Bridget died of SIDS,” I remind her. “There was an autopsy.”

“Yes, I know. I’m thinking about all the stress you had before her death, and then having to deal with her loss, too. You’re doing very well, you know? Some women wouldn’t be able to function after everything you’ve gone through this past year.”

“Thank you.” I relax and wonder what she would do if I got up and moved to the comfy chair. I don’t.

“Did your doctor start you on any antidepressants? I know you said you’d never been to counseling, but surely she gave you something to help.”

“She did, but I didn’t take it. I was afraid it might make me fall asleep and not hear her crying. I was all by myself at night.”

“I see. So, you suffered through three months of colic? Tough woman.”

I wonder—if a gust of wind blew through the sculpture, would it make a noise? I imagine a humming sound, probably. Low, like white noise from those machines that help you sleep. I must have slept some in those first few months. Even nights alone, there had to be some intervals of silence.

TODAY’S GIVEAWAY: EV Knight is giving away a signed paperback copy of her novella Partum. Comment below or email membership@horror.org with the subject title HH Contest Entry for a chance to win. 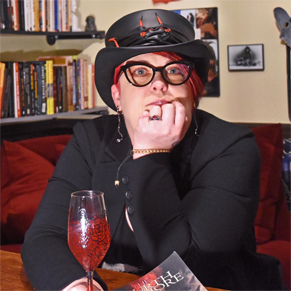 EV Knight is the author of the Bram Stoker Award winning debut novel The Fourth Whore. She has written and released her sophomore novel Children of Demeter this year as well as a novella, Partum. EV lives in one of America’s most haunted cities—Savannah, Ga. She is a huge fan of the Savannah Bananas, Dockside Seafood’s Shrimp and Grits, and the beauty of Bonaventure Cemetery. When not out and about searching for the ghosts of the past, EV can be found at home with her husband Matt, her puppy Gozer Augustus, and their three naughty sphynx cats—Feenix, Bizzabout Fitchett, and Ozymandias Fuzzfoot the First. You can interact with EV on Facebook and Twitter @evknightauthor because she is convinced that she is much too old for TikTok and Instagram

Links to purchase books can be found at https://evknightauthor.com/publications

One comment on “Halloween Haunts: Halloween’s Own Candyman by E.V. Knight”