I lead children into houses of horror. I advise them against touching monkeys’ paws. But I urge them to listen to heartbeats thump-thump-thumping beneath the floor.

I’ve taught middle school students for sixteen years now, and I love diving into tales of the macabre with them. From what I can tell, they also enjoy our treks into darkness. Eighth-graders seem eager to consume the stories of Edgar Allan Poe, in particular. Kids nowhere near old enough to imbibe Amontillado drink in the dread that’s developing inside Poe’s musty Italian catacombs. Heck, a malformed vulture’s eye is probably sometimes more palatable than whatever’s being served in the cafeteria for lunch.

From a teacher’s perspective, these twisted narratives offer opportunities for lively discussion on conflict, characterization, foreshadowing, point-of-view, and theme. As a horror fan, though, I simply want to gross out and surprise these too-cool-for-school adolescents. I yearn to see who shifts a little uncomfortably in their seats and who among my captivated pupils is actually one of us.

You’ll be happy to hear, there are plenty of “us” walking the halls. Many of my students first form goosebumps after obsessing over the words of R.L. Stine and Alvin Schwartz. As an educator, I of course urge them to explore other frightening voices, too:  Mary Downing Hahn, Holly Black, Ray Bradbury, Richard Matheson…

A number of kids don’t even need my nudging or my guidance. They have already graduated to King. Just last week, after completing a classwork assignment, a quiet young man removed a copy of It from his backpack and continued reading from page 534.

Pennywise smiles from my classroom wall, as does Pet Sematary’s resurrected Church. Room 25 is decorated in artwork and posters that I’ve procured from various local conventions. Joining the clown and the cat are pieces featuring Jason Voorhees, Ghostface, and diabolical Sam from Trick ’r Treat.

Oddly enough, the presence of these scary figures makes fourteen-year-olds feel safe around me. I’m not just some authoritative “mister” demanding that they spell-check their coursework. I’m not just some old dude forcing students to silence their smart phones. I’m also an actual person with outside interests. I’m a bonafide human being. Not a four-eyed monster in a skinsuit.

I work in a predominantly Latinx community. I cannot connect with these kids on a cultural level. I do not look like them, and my experiences growing up were largely different than theirs. But if we can find common ground inside a fog-covered graveyard, we can build trust and work as a unit to make the school year a memorable one.

Because we don’t just read horror in my classroom. We also write it. I share my passion of storytelling and push students to create their own chilling masterpieces. Eerie narrative poems, spooky stage plays, imaginative alternate endings, and monologues from the dismembered dead. It’s a no-brainer: have kids demonstrate what they’ve learned through use of the genre nearest and dearest to my heart. Grading papers is far less terrifying and painful when ghosts, guts, and gore are on the page.

Folks might ask, “Why share horror with young audiences?” To that, I say, young people are already experiencing various forms of terror in their everyday lives. Puberty is literally body horror, is it not?

All joking aside, too many of my students struggle with poverty, racial inequality and injustice, gang violence, and other forms of trauma. Society is far scarier than fictional killers stalking the shadows and phantoms wailing from beyond the pale. Why not give kids some kind of catharsis and escape into worlds of exciting, thought-provoking make-believe?

This was the thinking years ago when our Electives Department constructed a Halloween haunt inside the unused wing of the Industrial Arts Building. Wood Shop and Home Economic classes are no longer offered at our school site, but their abandoned spaces provide a perfect skeleton upon which to build a spooky walkthrough experience.

We constructed punny cardboard headstones and decked the halls with dozens of dollars’ worth of 99-cent store cobwebs. Rubber spiders and discarded dolls dangled from ceiling tiles. We dimmed the lights and played atmospheric music on hidden speakers.

I tasked interested Theater students to be my scarers. Interest in wearing masks and jumping out at schoolmates was high, so scaring had to be set up in shifts.

The absolute best part about the haunt was the final room. It was a vibrant, colorful display of wall-to-wall artistry. It was beautifully decorated to celebrate Día de Los Muertos. Teachers from outside our department, paraprofessional staff, and PTA members spent countless hours crafting bouquets of paper marigold flowers. They constructed ofrendas honoring lost loved ones. They prepared hands-on activities for anyone who visited the exhibit.

In other words, those who moved through the grim, scary part of the haunt would eventually be greeted with a joyful celebration of life at its end! A literal walk through darkness and an exit into light!

We were all proud of what we’d made. Classes signed up for the event. It was go-time.

I held a lantern and took trembling students into our makeshift cemetery. I narrated our trip in my creepiest timbre:

Watch yourself in this graveyard! It’s Halloween night!

There are hungry things here desperate for a bite.

Be very careful not to step on any of these graves.

Monsters prey on the weak, so at least pretend to be brave.

Theater kids leapt into view at nearly every turn. Other kids shrieked. A ton of glorious fun.

Next, we traveled under the “spiderweb tunnel”. My narration resumed:

Oh, thank goodness, all of you made it through alive!

Started off with a lot of you, but thought we’d end up with just five!

Now, as we continue, close your eyes and cover your ears.

Although, I can’t guarantee it will protect you from your fears.

Then, before entering the Day of the Dead portion of the experience, I recited:

Wow! I was certain a spider would snatch up one of you like a fly,

spin you in its silk and make your poor family cry!

We are done with the most treacherous leg of our tour.

The well-planned Day of the Dead exhibit had landed with a resounding thud. Disappointing and distressing, to say the least.

The next year, the Electives Department did not dare to do a “scare zone”. Instead, all attention was devoted to supporting an interactive Día de Los Muertos experience. Thankfully, it was far more well-received the second time around.

My takeaway from this story: kids genuinely like—and want—to be scared by things that go bump-bump-bump.

Why deny them of their fun?

Inside my classroom, we will always embrace that darkness together. 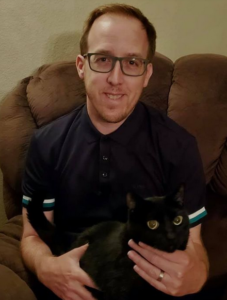 Much of Evan Baughfman’s writing success has been as a playwright, his original plays finding homes in theaters worldwide. A number of his scripts are published through Heuer Publishing, YouthPLAYS, Next Stage Press, and Drama Notebook. Evan has also found success writing horror fiction, his work found most recently in anthologies by No Bad Books Press, 4 Horsemen Publications, and Black Hare Press. Evan’s first short story collection, The Emaciated Man and Other Terrifying Tales from Poe Middle School, is published through Thurston Howl Publications. His spooky novella, Vanishing of the 7th Grade, will be released by D&T Publishing in 2022. More information is available at amazon.com/author/evanbaughfman

Evan is giving away an autographed copy of The Emaciated Man.  To be entered 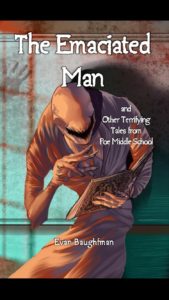 3 comments on “Halloween Haunts: PENNYWISE SMILES FROM MY CLASSROOM WALL by Evan Baughfman”