HALLOWEEN HAUNTS: COVER REVEAL, EXCERPT, AND THE BRAZILIAN PRIESTESS WHO POSSESSED ME TO JOIN HWA! By Tori Eldridge

Long before my Lily Wong thrillers hit the bookstores, I was possessed by a dark tale of Brazilian magic. An immortal trickster, a California artist plagued by voices, a mixed-race beauty cast out from her family, and Serafina Olegario, a desperate mother who rises from the slums of Brazil to become a fearsome Quimbanda priestess. Their forty-year saga, across three continents and a past incident in 1560 France, channeled through my mind and fingers into a screenplay and many evolutions of a novel before it finally found a home. Serafina lured me into the darkness, bound me with supernatural, psychological, and mystic horror, and used her magic—I am certain—to lead me to HWA.

From my first volunteer stint with Kate Jonez at the 2012 AWP book fair where Weston Ochse hung out with us at the HWA table for an hour chatting about horror, thrillers, and the writing biz, I knew I had found a caring and supportive community with bright spirits and dark imaginations.

Who knew horror writers were so friendly? We did, obviously!

For almost a decade, I’ve bent the ear of my L.A. Chapter friends about Serafina’s dark journey to overcome poverty, abuse, and bigotry by seducing Brazilian saints, tricksters, and gods. I shared my progress, submissions, re-imaginings, and even read one of my rave rejections where a big-five editor claimed I had “awakened her inner Yansã!”

With all my published horror short stories, Weird Tales poem, and Lily Wong thrillers, Serafina Olegario would not let me go. Without a doubt, the Quimbanda priestess guided me to Running Wild Press, a publisher for stories that don’t fit neatly in a box. 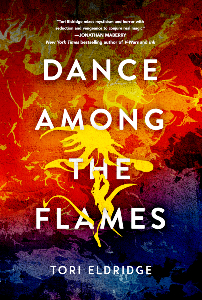 I’m overjoyed to share the stunning cover and an excerpt from my novel that was nurtured by my horror-writing community every step of the way. Serafina bound me with her magic. May she bind you, as well.

My heartfelt thanks to HWA heroes for this early praise.

“A mesmerizing blend of ancient dark magic and horrors both mystical and man-made. It was compelling, disturbing, beautifully crafted…in other words, I loved it!” — Lisa Morton

“A sensual and richly layered novel of poverty, privilege, and power. Vibrant and brutal, Dance Among the Flames is a cultural triumph.” —Lee Murray

“Compulsively readable, with prose so smooth and evocative the pages fly by.” —Tim Waggoner

“Full of spirit, magic and the energy of the gods.” —Cynthia Pelayo

“With Dance Among the Flames, Tori Eldridge looks for light and hope in the darkest corners of the human heart. She mixes mysticism and horror with seduction and vengeance to conjure real magic.”  —Jonathan Maberry

DANCE AMONG THE FLAMES

Exú crouched on the rocks, his sleek skin blending with the night and his golden eyes shining like stars, while below, the young witch burned. Her screams pierced through the crackle and pop of exploding sap and the cries of indignant and horrified villagers, who only a week before, had believed Colette to be the sweetest, most beautiful girl in Hameau de Vieille Forêt.

How quickly they turned. All because of one lecherous priest.

Exú shifted on the rock so he could sit on the edge and dangle his long black legs over the side. No one would see him. Even in plain view, naked in a forest on a winter night, there was only one person in all of France who could see him uninvited. The boy. And even then, only in the form Exú had chosen to assume.

But the boy was not looking up at the rocks. He was crying at the bound feet of the witch, the person he loved more than anyone in the world. The girl who was about to die.

Révérend Père d’Amboise thumped his staff on the wooden platform, like an emperor on a stage, lording his power over his pitiful congregation. If he knew what kind of power Exú would bestow on him centuries in the future, his greedy heart would rejoice.

Serafina breathed in the salty air of São Salvador as her newborn, Carlinhos, shuddered in his sleep. He had gorged himself on breast milk after humiliating her on the bus with his screams. Now, he dozed in sweat-drenched peace.

She wiped the milk drool from his jaundiced chin and smiled. How like a male to throw a fit, take his fill, then pass out, secure in the knowledge that a woman would clean up the mess.

Serafina checked for traffic then hurried away from the boats to the bustling Mercado Modelo, the famous banana-yellow market where locals hawked their arts and crafts, and tourists richer than her dined on Brazilian cuisine. Such a cheery evolution from the custom house that had stowed her ancestors as they came into port. Back then, slavers had packed her people with crates of perfume and wine. If today went as planned, Serafina would buy a bottle of each.

The narrow sidewalk opened into a plaza in front of the market and afforded Serafina her first glimpse of the sixty-three-meter elevator that connected Lower Town at sea level with Upper Town on the cliff. Long neat buildings perched along the top of an escarpment, so sheer it looked as though God had chopped the land with a giant ax. From below, faded multi-colored apartment buildings reached up from the sidewalk like the scaly fingers of an old person’s hand. Even with their busted windows and fluttering laundry, any of them would have been better than the hovel where Serafina lived.

She hugged Carlinhos to her chest and darted between buses to the other side of the avenue where the Elevador Lacerda would take them to the top. Usually, she opted for the cheaper funicular or hitched a ride up the steep roads. Today, she would travel in style.

She nudged Carlinhos awake as the elevator began its climb. “Open your eyes, little one, and see what God has made.”

Beyond the looping roads, docks, and boats, lay every shade of blue from the aqua ocean to the sapphire and azure sky.

“See how it shimmers, my love? Like a precious jewel, only for you.”

Carlinhos was special. Serafina knew it, despite the sad resignation in the midwife’s eyes as she had swaddled his protruding belly and concave chest. All babies were ugly at birth, and all mother’s said things they didn’t mean in the throes of unbearable pain.

“It hates me. And I hate it,” Serafina had cried, as the baby refused to come out.

The midwife clutched her beads and spat on the floor. “Foolish girl. Who knows what spirits are listening? Shut your mouth before you draw their attention to you.”

Serafina was not a fool, no matter what that awful midwife had said.

The shock from Serafina’s dearest friend had been harder to dismiss. The older woman had nearly fallen out her window in her eagerness to hold Serafina’s baby, but when she saw him, she had pulled back in alarm. The pity in Carmen’s voice had been even worse.

“No worry, querida. You still young.”

“What does that have to do with anything?” Serafina had said.

“You will have other children. You could save the name.

“I don’t need other children.”

The implication had followed Serafina onto the bus, ruined her mood, and caused her baby to fuss. Everyone had stared, not from admiration for Serafina’s towering height and stunning beauty, but at the squirming, screeching creature in her arms. Even the woman in the window seat beside her had turned away after begging Serafina to “feed the damn thing” and shut it up.

Serafina had never felt so embarrassed nor as determined as she did in this moment. She and Carlinhos would prove them wrong. All he needed was a strong mother to show him the way. That way began with the cobbled avenue toward Jesus Square…

Pre-order Dance Among the Flames! 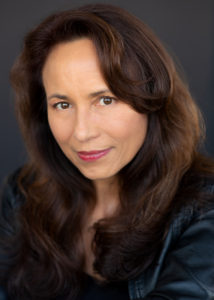 Tori Eldridge is the Anthony, Lefty, and Macavity Awards-nominated author of the Lily Wong thriller series—The Ninja Daughter, The Ninja’s Blade, The Ninja Betrayed. Tori’s shorter works have been published in Weird Tales magazine and numerous anthologies featuring horror, dystopian, and other literary genres. Her horror screenplay The Gift was a Nicholl Fellowship semi-finalist. Tori holds a fifth-degree black belt in To-Shin Do ninja martial arts and has performed as an actress, singer, dancer on Broadway, television, and film. Her Brazilian literary horror, Dance Among the Flames, releases May 24, 2022.