Halloween Haunts: Frights For a Good Cause by Robert P. Ottone

I got to write about my family’s connection to Halloween last year, which was very cathartic, and resulted in tears when I talked to my mom about it. This year, I thought I would talk about the importance of fundraising as it relates to engaging with haunted attractions. As I’ve gotten older, I do my very best to be political with how I spend my money. An extension of this relates to charitable organizations. Growing up, we often put on haunted houses on our front lawn, with multiple rooms, scares, designs, effects, all that good stuff. Typically, we would have a suggested donation box in support of St. Jude’s Children’s Hospital or The Juvenile Diabetes Research Foundation or some other worthy cause. This is, essentially, where the concept of charity and supporting the ones I believe in took root, thanks to my dad and his endeavors to raise money for the charities he believed in.

When it became clear that COVID would be impacting my usual haunting endeavors last year, I was worried that my favorite haunted attraction here on Long Island would be shut down. Camp Pa-Qua-Tuck’s Spooky Walk. This is a yearly event that I’ve been fortunate enough to attend for over a decade now, enjoying the various incarnations it’s taken, and the various kinds of frights on offer each year. The haunt itself is done entirely in support of Camp Pa-Qua-Tuck, a place where children with disabilities can enjoy the sun, the water, nature and more. A noble and valuable cause that I believe in wholeheartedly.

With a lot of haunts shutting down last year, Camp Pa-Qua-Tuck shifted to a drive-in model that was, by far, one of the scariest in years. Even from the safety of my friend’s Jeep, we were shocked and terrified, as more than one ghoul attempted to climb into the car, often with a warning cry of “If the door is unlocked, we’re coming IN!”

We made sure the doors were locked.

This year, the Camp has decided to host the Spooky Walk in a traditional fashion, allowing folks to walk through, making their way through a lengthy woods stroll, where nothing is at it seems, then down, along the water, where haunted pirate ships fire canons and sing sea shanties. From there, one curves up a hill and through a thick wood to assorted cabins, each with their own nightmarish theme. The entire event culminates in Club Boogie, a silly, neon palate cleanser where you can dance with spooks and specters. I usually love this part.

Anyway, if you’re going to support a local haunt this year, make it one that has a charitable element to it. Sure, you can go to any number of haunted events, hayrides, whatever, but to me, if you can get your spook on while helping a worthy cause, then what’s better than that? 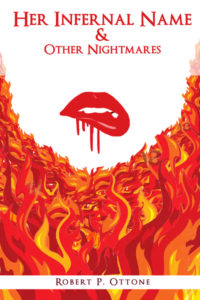 TODAY’S GIVEAWAY: Robert P. Ottone is giving away a signed copy of his collection Her Infernal Name & Other Nightmares.

Comment below or email membership@horror.org with the subject title HH Contest Entry for a chance to win.”

Robert P. Ottone is an author, and cigar enthusiast from East Islip, NY. He delights in the creepy. He can be found online at SpookyHousePress.com, or on Instagram/Twitter (@RobertOttone). His collections Her Infernal Name & Other Nightmares and People: A Horror Anthology about Love, Loss, Life & Things That Go Bump in the Night are available now wherever books are sold.

8 comments on “Halloween Haunts: Frights For a Good Cause by Robert P. Ottone”