Halloween Haunts: I Dare You to Play (Paranormal Games for Halloween) by Brooke MacKenzie

Halloween is that time of year when the veil between our world and the next, the natural and the supernatural, becomes virtually non-existent.  What better way to celebrate, and gather real-life inspiration for some excellent horror writing, than by invoking the paranormal?

For centuries, the brave (or foolhardy) have been summoning the supernatural through various rituals, or “games.”  During the Edo period in Japan, samurais used to play a game called “Hyakumonogatari Kaidankai” as a test of courage.  During the game, the players would sit in a room together, and one person at a time would tell a frightening ghost story.  The storyteller would then go into a separate room where there were 100 lit lanterns and a mirror on the table.  The storyteller would extinguish a lantern, look in the mirror, and then rejoin the other players.  As the game progressed, the room with the lanterns would grow darker, and players would often see something sinister looking back at them in the mirror.  After the final tale was told and the 100th lantern was extinguished, it was as if the spirits had received an invitation to enter the home and wreak all kinds of havoc.  Or so the story goes.

Paranormal games have become slumber party fixtures for generations, with eager participants summoning Bloody Mary in dark bathrooms, or talking to dead relatives while hunched over Ouija Boards,  or defying physics while playing “light as a feather, stiff as a board.”  Eventually, like everything else, paranormal games found their way to the Internet, to be copied and pasted and shared the world over.  For better or worse.

One such game, The Elevator Game, became firmly entrenched in urban legend after the tragic death of Elisa Lam, who was found floating in a water tank at The Cecil Hotel.  The last time she was seen alive was on an elevator security camera, and she was behaving erratically—hiding and talking to someone who wasn’t there.  Some people believe that what we were seeing in the video was Elisa playing the Elevator Game.  In this game, through pressing a series of buttons in an elevator, a player can be transported to an alternate dimension.  The player will know that the game has succeeded when the elevator opens and the hallway—which still looks identical to the one in the building—is completely dark.  And there, in the darkness, will be a glowing red cross.

Are you feeling curious?  I have included the instructions of two paranormal games, along with some background information about each of them: The Bathtub Game, and The Hide-and-Seek Game (sometimes called Hide-and-Seek Alone). If you do decide to try the games in a quest to amuse yourself, get some inspiration for a new horror story, or answer nagging questions that you might have about the afterlife and the existence of spirits, you play at your peril. I hereby absolve myself of any responsibility for the consequences – good or bad – that may result. After all, you have been warned.

According to the legend, a woman known as Daruma-san fell in the bath and hit her right eye on the tap, which killed her.  In this game, a player summons her ghost while taking a bath, and then spends the rest of the day in a paranormal version of the game Red Light, Green Light.  If you play the game, Daruma-san’s ghost—with only one eye—will follow you around, moving closer and closer all day long, trying to catch you.  You might see her out of your peripheral vision—a dark-haired woman with rotting, wet skin.  No matter what, do not allow her to catch you.  Ever.  Are you ready to take a bath?

Minimum Number of Players: One

Materials: A full bathtub (a shower will not suffice), and towels or a bathmat to avoid slipping

Dolls can invoke a feeling of dread for a lot of people.  If you choose to perform a ritual in which the doll is temporarily inhabited by a spirit that plays a potentially deadly game of hide-and-seek with you, well, you will certainly never look at a doll the same way again.  This game originated in Japan, and has enjoyed quite a bit of popularity over there.  In 2008, the instructions were translated into English and began spreading to other parts of the world.  Find a doll, look into its glassy eyes, and ask it to play a game.  After all, what’s the worst that can happen?

Minimum Number of Players: One

TODAY’S GIVEAWAY: Because her book is not yet ready to purchase, Brooke MacKenzie is giving away a $25.00 Amazon Gift Card to one lucky reader!!  Comment below or email membership@horror.org with the subject title HH Contest Entry for a chance to win.

By day, Brooke MacKenzie is a reading specialist and writes educational articles and personal essays.  By night, she is

a scary movie fanatic and writes horror fiction by candlelight.

Her upcoming short horror fiction collection, GHOST GAMES, has been called “a solid win” by Lisa Morton, and “[a]n indelible batch of nightmarish tales” by Kirkus Reviews.  She received a B.A. from Sarah Lawrence College and an Ed.M. from the Harvard Graduate School of Education, and she lives in New York City with her husband and daughter.  For more information about the book, and about Brooke, visit her website: www.bamackenzie.com, or follow her on Instagram: @mackbrookepro.

GHOST GAMES is a short horror fiction collection, which will be published by Dreaming Big Publications (date TBA).

Do not play this game.  This is the standard disclaimer given to anyone who wishes to encounter the supernatural 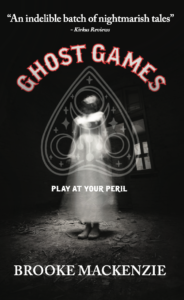 through a potentially dangerous ritual, or “game.”  It sounds innocent enough, as each one is named after an everyday object: The Closet game, The Telephone game…how scary can it really be?

As it turns out, games can be terrifying.  And even deadly.  Ghost Games is a collection of short horror fiction stories in which each of the female main characters decides to throw caution to the wind and play a game in which she summons the paranormal: ghosts, demons, and even other dimensions.  What happens next will make you think twice before riding in an elevator, playing with a doll, looking in a mirror, or soaking in a bathtub.  There are seven spine-tingling fictional stories – with each one devoted to a specific game – and one non-fiction story, which recounts a real-life experience with a Ouija Board.

For the brave and curious, there is an appendix section which outlines the instructions for playing each of the games featured in the book.  If you decide to try them, remember: you play at your peril.

“Playing games to conjure spirits and demons leads to horrifying consequences in MacKenzie’s debut short story collection… MacKenzie also ties her stories together with profound themes; many of the women characters, for example, suffer from loneliness even when surrounded by friends or family members… Throughout, MacKenzie’s concise prose style generates sharp images… An indelible batch of nightmarish tales.”

“If you were (or are) that kid who set up a seance at every slumber party, you’ll love this collection of spooky and playful tales about urban legends. Ghost Games is a solid win.”

“Ghost Games both brought me back to the delicious terror of childhood slumber parties, when friends pulled out Ouija Boards or convinced everyone to chant “Bloody Mary” in front of bathroom mirrors and anything felt possible, and also took me someplace brand new. Brooke MacKenzie has gifted us with a spine-tingling, energizing collection.”

–Gayle Brandeis, author of Many Restless Concerns, nominated for the 2020 Shirley Jackson Award

“The riveting stories that comprise Brooke MacKenzie’s Ghost Games explore the dark side of the Internet, where the ‘games’ that are played are anything but. The narratives derive their power from the juxtaposition of the visible world and the one that exists unseen beside it. Whether inadvertently releasing demons or getting caught in an alternate dimension, the women in these stories suddenly find themselves in a kind of jeopardy they never imagined. Absorbing and genuinely terrifying, the stories of Ghost Games will stay with you long after you close the book.”

—Kathleen Donohoe, author of Ghosts of the Missing and Ashes of Fiery Weather

3 comments on “Halloween Haunts: I Dare You to Play (Paranormal Games for Halloween) by Brooke MacKenzie”