Halloween Haunts: Halloween: The Holiday That Made Me by Samantha Arthurs

Most every child loves Halloween, for the obvious reasons. Costumes, candy, classroom parties, and a little dash of mischief thrown in for some razzle dazzle. We’ve all been there, and I’m sure that we all had an undeniably great time, but for me Halloween always meant just a little bit more. I was born on November 2nd, and while I always bemoaned my arrival on All Souls Day instead of All Hallows Eve, my feelings on the matter were often soothed by Halloween themed birthday parties. Sometimes my guests and I wore costumes, and other times the coinciding of my two favorite events of the year were marked by a cake featuring a witch flying in front of a full moon or black and orange crepe paper strung from our ceiling fan. It was often the perfect marriage of the things I loved most, and those memories are some of the most fond to recall.

While my mom was busy with birthday cakes and costumes, my dad and sister had a different approach in mind. It was with them that I saw a lot of my very first horror movies, and logged countless hours of shows like Tales From the Crypt and Monsters on the SciFi channel. Because of them the love of Halloween and horror, which in my childish mind went hand in hand, burrowed into my heart and lived all year along instead of just one day a year. It was because of Halloween, my family, and the way that my very birth itself seemed to revolve around the spookiest of holidays, that I began to grow and flourish into a horror fan who grew up to become a horror writer.

As I got older the Halloween themed birthday parties ceased to exist, but my love for all things horror grew exponentially. When I picked up my very first Stephen King book (The Shining) at a tender age, I was further molded and transformed. It was only then, reading those first words by the master of horror, that I could form a correlation between what I was experiencing then and my younger years. I realized very quickly that I didn’t just love Halloween superficially for the decorations and costumes and the myriad films that came on television. Oh, no, I learned something much deeper than that. I learned that I genuinely enjoyed the feeling of being frightened.

Maybe that made me weird; maybe it still does. If so then I am completely accepting of my weirdness, and I embrace it with open arms. There are few things better in this world than dark haunted houses, books that make you shiver, and movies that keep you up at night. At least, that’s the way it is for me anyway. I didn’t understand that when I was younger. I was never able to put into words the way that the Halloween season made me feel. I suppose back then I chalked it up to just being fun, adding a different layer to my birthday and my life that I didn’t get to experience the rest of the year. It was a once every 365 days event, and that alone made it special in childhood, but realizing that I could have those feelings all the time? It was simply sublime.

Without October 31st, I wouldn’t be the person that I have grown up to be. I know that without a doubt, and my connection to the holiday runs deep. That has never, and will never, change. I find myself these days so ingrained in horror, to the point that it has even infiltrated my life as a writer. It feels like a wonderful, final change. Like I am finally exactly where I was always meant to be, from a very young age.

These days I throw a party every Halloween, an all ages event because I truly believe that the best day of the year is for everyone. I plan month long horror movie marathons, daydream about my next costume, and log long hours typing away on my next horror novel or short story. I still love that feeling of being scared, of feeling a shiver go down my spine, but most of all I just live for that special time of year even  as an adult. While I may not celebrate the way I did as a child, with black and orange streamers and a witch themed birthday cake, I still make the most of every moment. There are a finite number of Halloweens and birthdays in my life, and I intend to enjoy them all.

TODAY’S GIVEAWAY: Samantha Arthurs is giving away a signed hardback edition of Rag & Bone: Transmission, the first book in the Rag & Bone trilogy. Comment below or email membership@horror.org with the subject title HH Contest Entry for a chance to win.”

Samantha Arthurs is the author of the Rust series, the upcoming dystopian/pandemic horror trilogy Rag & Bone, 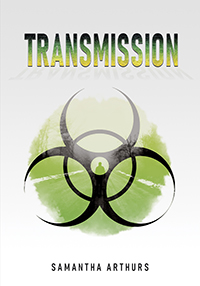 Murder Mittens, and The Will. Her debut novel was published by Martin Sisters Publishing in 2014, and she is currently working exclusively with Cat&Key Books. She used to be a young adult contemporary author, but has since found a home in the horror genre. When she isn’t writing she enjoys reading and reviewing books, hanging out with her dogs Ronan and Vader, playing Dungeons & Dragons, and watching horror movies. She was born and raised in eastern Kentucky, where she still happily resides in the middle of nowhere. Her primary dream in life is to become Stephen King’s protégé  but as that isn’t really an option she’s quiet happy to settle for eventually becoming a full time author.

An Except from Rag & Bone: Transmission

The world didn’t end quickly, the way that it does in movies. No, it happened much slower than that and lasted, give or take, about two years before it was all over. If you asked Avery Harris what he thought about it, well, he was apt to tell you it felt both faster and slower than any amount of time had ever felt before. There isn’t anyone left around to ask him though, because he is the last one.

He had read enough books and watched enough television to know how it was supposed to be in fantasy and exactly how it wasn’t in reality. Fiction always had the protagonist finding other survivors. They always banded together to take out the baddies who were still lurking in all the dark and gloomy places. So far, Avery hadn’t seen anyone, good or bad, in seven months. That was when his mother had succumbed, and he had become the sole population of Graven, Kentucky. He was the last human standing in this remote corner of nowhere, and possibly even in the entire state. Or, realistically, maybe even in the entire country or the world.

According to the last reports coming in off the television and radio, the virus had spread from North America. The television had gone out sometime in May, and the radio had finally given up the ghost in early July. The last transmissions told that cases had cropped up in London, Paris, Rome, and as far away as Moscow, Beijing, and Tokyo. It seemed that there wasn’t anywhere left untouched by the Ruger Virus, named for the doctor at the CDC who had discovered it. At first, it was believed to be a strange mutation of the flu, but that had been so wrong. Not only had it been wrong, but it was a mistake that ultimately proved to be deadly.

Find out more at www.sarthurs.com or on Amazon at https://tinyurl.com/4pc2u6nt

8 comments on “Halloween Haunts: Halloween: The Holiday That Made Me by Samantha Arthurs”