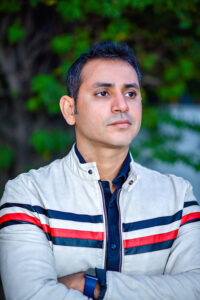 Usman T. Malik’s fiction has been published at Al-Jazeera, WIRED, Center for Science and Imagination (Arizona State University), in New Voices of Fantasy and several year’s best anthologies including The Best American Science Fiction & Fantasy series. He has been nominated for the World Fantasy, Locus, and Eugie Foster awards, and has won the Bram Stoker and the British Fantasy awards. Usman’s debut book Midnight Doorways: Fables from Pakistan won the 2022 Crawford Award from the International Association for the Fantastic in Arts (IAFA) and was on Washington Post’s 2021 list of best new science fiction and fantasy collections.

Reading probably. I was eight or nine and in love with imaginative tales of all sorts. Growing up in Pakistan meant I was surrounded by stories of magic and miracles and reading books about magical rings and portals and peris and devs meant my writing eye had begun to develop even before I knew I wanted to write.

I don’t think anyone can honestly answer the question of why one likes a particular genre. Who knows what in utero and postpartum influences we carry — what traumas, emotional shocks, cultural contexts and haunted geographies. My earliest memories include being afraid of the dark, of asking my father to wrench the curtains back as something surely was hiding behind them. Where did that come from? I have no clue. We are drawn to what we fear the most but why fear it in the first place? Intellectually speaking, I could perhaps say that horror allows me to realize and then slay my fears and doubts at their most powerful, but that is an answer on retrospective reflection and likely eludes subconscious forces that make me gravitate to horror.

I write what I know, understand, or fear best. That means my writing is filled with places I know and people I have been around. There’s nothing conscious or token about my inclusion of Asian characters in my fiction; it’s simply that I know them best and a writer’s job is to be as truthful and honest as possible in their portrayal of the world.

That the world may have teeth and may be ready to bite you, but also that we can take more bite than we think we can.

We contain multitudes as much as the world contains them.

There was a while in the 70s, 80s, and early 90s when soulless, passion-less horror was being written and marketed for a quick buck by publishers and writers big and small. Happily that time seems to be behind us with both parties having learnt the lasting value of storytelling that has heart. Good, intelligent horror remakes the world in its own image and will always outlast ‘market trends’. That is the present we find ourselves in now.

Second, we’re seeing global horror dominate bookshelves and bestseller lists. No longer does horror belong to the main streets of small-town America or the neat bricked lanes of the English village. Asian, Latino, and other non-white, non-western stories attract and compel a global audience as much, if not more.

For the longest time, horror and spec-fic in general treated anything non-Anglo as exotic, as other, with centering of the white man as hero and anything remotely non-white/non-western as barbaric and horrifying. Dan Simmon’s The Song of Kali continues to be a racist tirade with not the slightest twinge of empathy for or understanding of its setting. That the ‘civilized’ white man’s vacation to a foreign country turning into a nightmare was a popular horror trope for the longest time (and not the white man’s exploitation of other races/ethnicities) speaks volumes about whose narrative was deemed worthy of being told.

Happily that seems to be changing. The ‘malevolent other’ is slowly coming to the fore: the ‘brown dog’, the ‘black savage’ is finally telling their own story in ways only they could — a most promising development in the genre.

I don’t know about characters, but movies by Takashi Miike (Audition), Park Chan-Wook (Oldboy), and Ana Lily Amirpour (A Girl Walks Alone At Night) blew my head wide open. I suppose Ana is Iranian, so not really an Asian director, but that movie is so good. Goes on to show how diverse and interesting the world is when you step outside the Anglosphere.

Don’t worry about pandering to western stereotypes or the market. Write your own darkness. Spill your own fears onto the page and the audience will follow.

Write what astonishes you, fascinates you, terrifies you. Write the personal, never the generic; and your stories will find their readers.

Learn to write and (more important) read well. Read everything, steal from everything. Reading within your own genre only will lead to dullness. Great writers are inspired as much by their grandmother’s cookbook as they are by the canon. For that matter, read and then discard the western canon. Make your own.

One comment on “Asian Heritage in Horror: Interview with Usman T. Malik’s”