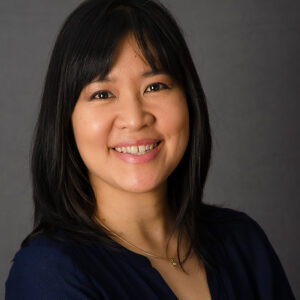 Geneve Flynn is an award-winning speculative fiction editor and author.

Geneve was assistant editor for Relics, Wrecks, and Ruins, a speculative fiction anthology which is the legacy of Australian fantasy author Aiki Flinthart, and is in support of the Flinthart Writing Residency with the Queensland Writers Centre. Relics is listed on Locus magazine’s 2021 Recommended Reading List.

Her poetry features in Tortured Willows: Bent, Bowed, Unbroken, a Bram Stoker Award-nominated collaboration with Angela Yuriko Smith, Lee Murray, and Christina Sng. Geneve has been nominated for the Rhysling and Pushcart awards.

Geneve loves tales that unsettle, all things writerly, and B-grade action movies. If that sounds like you, check out her website at www.geneveflynn.com.au.

It was always an itch I had to scratch. Like many writers, I was an incurable daydreamer and constant reader. It only seemed natural to start creating my own stories.

What inspired me to start writing about Asian characters, settings, and mythology was something different altogether. I always wanted to live in the books I was reading. However, as a Chinese-Malaysian girl whose family had hopped across a couple of countries, I didn’t always fit into the stories. There was usually some sort of mental calisthenics required so I could be in the story, never mind be the main character. I had to consciously reimagine the narrative from a female perspective, or from someone whose skin was darker, and whose eyes were a different shape.

Sometimes I wonder if it’s innate. Tim Waggoner once described the horror writer’s way of seeing the world as an aptitude for noticing the abject, the loathsome. When you write or read horror, you have a curiosity for the dark things in the world. And it seems if you love horror, you love it with your whole heart. When I read Stephen King’s It as a teenager, I just knew I was home.

When I first started writing about characters that were like me, it took a really conscious effort to focus on Asian diaspora characters and themes. It felt quite unnatural and I wondered if anyone would want to read these stories. After the reception for Black Cranes: Tales of Unquiet Women and Tortured Willows: Bent, Bowed, Unbroken, that worry is a little smaller.

Now, I reach for those characters and themes because they’re my stories and they explore my fears and my experiences. In a way, that means there isn’t something specific that I want to portray, except perhaps to show that Asians and Asian women aren’t all the same.

Writing horror has taught me to have hope and to be optimistic. That sounds strange, but when you can put a form to your anxieties, when you create a space to imagine and face the very worst, and accept all shades of yourself and others, you come out the other side a little less burdened. I’ve also learned that I have a deep-seated fear of dolls and marionettes. The uncanny valley is my bugbear. A bit random, but sometimes, you can’t choose what your brain throws up at you.

There’s been a greater call for diversity in the material, the creators, and the gatekeepers. It’s still early, and there’s lots more work to be done, but I’m encouraged by this change. The industry has also seen a shift in the paths publication, and ways to reach your audience. With the growth of self-publishing, indie publishers, Kickstarter campaigns, patreons, cross-genre and cross-platform opportunities, writers, editors, and producers can take more chances with stories that might once have been too far outside the comfort zones of the traditional markets. I think one will feed the other. New ways to tell stories will allow us to discover new territory.

If you take the Bram Stoker Awards® list of winners and nominees, you can get a glimpse of how the Asian community has been represented (outside of Asian markets) over the years. One Asian author shortlisted in the inaugural awards in 1987—S.P. Somtow for long fiction—and it wasn’t until about five years ago that we started seeing more Asian creators appear. Last year, Asian writers won across three categories. This year, there are around eight Asian creators listed across several categories, some multiple times. Exciting stuff.

There’s been a surge of interest in Asian horror, driven perhaps by a hunger for unfamiliar scares, and the success of movies such as Ringu, Ju-on: The Grudge, Train to Busan, Parasite, and series such as Kingdom, and Squid Game.

I hope that the interest continues, not just because I’m an Asian horror writer, but because it means breathing new life into the genre.

Seo-bi from Kingdom, a Korean horror series, is wonderful. She has agency and heart and courage. Uncle Tung from the Hong Kong movie Rigor Mortis is a horrifying yet heartbreaking portrayal of a jiangshi—the Chinese hopping vampire. Leto from Elaine Cuyegkeng’s short story “The Genetic Alchemist’s Daughter” from Black Cranes is so finely drawn. She’s cultivated as carefully by the author as she is by her circumstances.

Join up to associations like the HWA. There is so much support available, both formal and informal, and, honestly, horror folks are the nicest people.

Write whatever stories you want. If you love tales about selkies or werewolves, have at it. If you want to create horror about jiangshi, or hungry ghosts, or tiyanaks, dive right in.

Don’t feel like you have to represent your heritage at all times. I write about Asian characters and Asian mythology, because those are the stories that keep me up at night. But I also write about evil crows and Stoker-based vampires. Write a great story. Someone will want to read it.

One comment on “Asian Heritage in Horror: Interview with Geneve Flynn”