Jewish Heritage in Horror: An Interview with Aden Polydoros 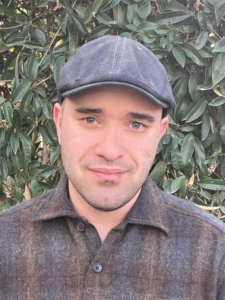 Aden Polydoros is an author of YA dark fantasy and gothic horror novels, and has a bachelor’s degree in English from Northern Arizona University. His most recent novel, The City Beautiful, was declared a Best YA Book of 2021 by New York Public Library, BookPage, Buzzfeed, and Tor.com, and was the winner of the 2022 Sydney Taylor Book Award for Young Adult fiction. His forthcoming gothic fantasy novel, Bone Weaver, comes out in September 2022 from Inkyard Press/HarperCollins.

I’ve always been interested in writing and reading, but it wasn’t until ninth grade or so that I began writing with the eventual goal of being published. However, for me, writing has always been much more than that. When I was struggling deeply during my teen years, it became an emotional outlet and form of escapism.

I grew up reading horror. At first, it was just Goosebumps, Coraline, and so on, and then in middle school and high school, I began reading adult horror like Stephen King. What draws me to horror is the way it can be used to explore fears and societal tensions, and unpack complex feelings and experiences in a format that is more accessible and universal than exploring them in an issue driven book. I genuinely believe that horror can breed empathy.

Do you make a conscious effort to include Jewish characters and themes in your writing and if so, what do you want to portray?

Over the last few years, it has become increasingly important for me to include Jewish characters in my writing. I think what I really want to portray is the diversity of the Jewish experience, because I feel like a lot of people who are not Jewish tend to interpret Judaism against a Christian framework, which leads to some misunderstandings and fails to take into account the different ways that Jews themselves interpret Judaism.

Alter, the main character in The City Beautiful, is religiously observant and filters his understanding of his own sexuality through his religious and cultural upbringing, as well as Victorian era views on queer identity. However, the main character in my upcoming middle grade novel comes from an interfaith family and is not religious or observant, but still considers himself Jewish. And Vera, the main character in my Fall 2023 historical horror novel, A Monstrous Vengeance, spends much of the story trying to understand her own place in Judaism, when she is essentially a monster of Jewish folklore and yet is considered by both Jewish and non-Jewish characters in the story to be an abomination.

Working on The City Beautiful forced me to confront my own fears and insecurities regarding expressing, or even divulging, the fact that I was Jewish. It’s definitely made me give more thought into my own level of observance and where I see my place in the Jewish community, considering that I’m not religious and grew up in an interfaith family.

How have you seen the horror genre change over the years and do you think there’s more that can be done to educate readers and authors on Jewish culture?

I think the horror genre has become increasingly diverse. In terms of educating readers and authors, I think it’s important for authors in particular to examine the antisemitic coding of more classic horror when working on their own stories. For example, the Jewish coding in Stoker’s Dracula. But just as important is examining the racism, homophobia, anti-Romani sentiment, and xenophobia inherent in classic horror, which in turn has influenced pop culture and contemporary horror.

I’m hopeful that the horror genre will continue to grow more diverse, not just in publishing, but also the film and videogame industries.

How do you feel the Jewish community has been represented thus far in the genre and what hopes do you have for representation in the genre going forward?

Compared with other genres, I haven’t seen much in terms of horror that centers Jewish characters and themes. I know that I will continue to write Jewish horror, and I hope other authors will follow.

Do you think there is a difference between Jewish horror and horror that is Jewish or are they one in the same? For example, the realism of the Holocaust is horrifying and the otherness that comes with it compared to the folkloric horror of dybbuks, possession and other creatures?

I think that anyone who is familiar with Jewish history—not only the Holocaust, but medieval blood libel, pogroms, the Inquisition, etc.—can see horror in the sheer cruelty and violence to which Jews have historically been victim to. I think that, for me at least, the landscape of Jewish history is thematically and visually very Gothic and evocative of traditional horror scenery.

So, I wouldn’t say that there is a difference between Jewish horror and horror that is Jewish, only that one explores the folkloric side of Jewish myth and culture, while the other explores the banal and much more horrifying reality. What’s truly fascinating is when you can superimpose the folklore atop the reality, as I did in The City Beautiful, which combines the supernatural possession of a dybbuk with the real-life horror of the antisemitic pogroms that spread through the Russian Empire in the 1880s. This is another theme I explore in my Fall 2023 horror novel, A Monstrous Vengeance, which is set in Lithuania during the Holocaust, and explores a golem’s journey to understanding what it means to be human, during a time when humans committed unspeakable atrocities.

I would highly recommend Ava Reid, who has a horror novel coming out on May 24 called Juniper & Thorn, and Sam J. Miller, who wrote a queer ghost story called “The Blade Between.”

For horror authors in particular, I would recommend really trying to dig into what they want their book to tell, and what they hope their audience will take away from it. For me, horror has always been a way to dissect and discuss fears, experiences, and insecurities, and I feel that when I tap into my own history, that’s when horror becomes horror at its finest.

It would ultimately depend on where they are at in their journey. If they are just getting started, and this advice applies to horror authors as well, I would recommend that they don’t give up on their writing. This can be a very hard industry, and rejection is unfortunately part of the process.