It is always this time of year when I can feel something in me start to shift, slightly.  It’s an easing, a relaxing—it feels in many ways like the last few miles driven on a long road trip, when you know home is just around the corner.  As the air starts to cool and crispen, and the leaves flare into ever deeper fires of color, and nights linger a little longer than they did in the long summer months, when I start to see skulls and pumpkins and hollow-eyed latex masks fill the shelves of every store like strange totems—it’s when this happens that I start to feel at home.  I know Halloween is just around the bend.

It is easy to see Halloween as just another holiday, a blip on the calendar, a crass commercial event even, but for me this night, and the season surrounding it, carry a deep personal weight and significance that I only barely understand.  In many ways, Halloween is responsible for who I am as a writer.  It profoundly shaped my imagination, how I see the world, and the kinds of stories I feel compelled to tell.  It gave me the lens I needed to view the world and put it on paper, with all its shadows and mystery.

From an early age I was obsessed and infatuated with the iconography of the holiday, with its ghosts, witches, and scarecrows, its masked killers and haunted houses with eaves clogged with so many autumns’-worth of leaves.  Few things get me quite as enthusiastic as the sight of jack o’ lanterns lining the sidewalk, their faces flickering in sawtooth grins and angular, empty eyes.  It is pure enchantment, but of the unsettlng and unsentimental variety.  There is darkness in it.

As a child, it was my favourite day of the year.  It gave me an outlet to be myself, and provided an escape that I needed. Everyone feels a little powerless as a child.  You are constantly being told what to do, where to go, and how to be.  The adult world is, at best, perplexing, and at worst, for some of us, a source of constant menace that must be evaded and survived. For this one night every year, I was able be whoever I chose (usually a monster, the werewolf being my favourite for years) and I would walk parentless through a night that seemed poised to surprise me and terrify me.  On this one night, the entire world felt like a haunted house, whose windows and doors seemed ready, at any moment, to reveal hidden specters.  I was in love with the promise of the night, the vague danger, the sense of anything being possible.  There are some people, like me, who find solace in the dark, the night and its promise of the supernatural. What Bradbury once called “autumn people, thinking autumn thoughts.”

For me, the holiday epitomizes that sense of the world basically being a frightening and inexplicable place—filled with shadows where things that never see daylight might walk and fill the air with mad whispers.  And the fact that we can, collectively, revel in this possibility for one night is, in a paradoxical way, freeing and empowering.

I was, I am willing to admit, a pretty bizarre child.  I remember many nights spent sleepless in my bed, terrified that I would be abducted by aliens (I was obsessed with X-Files at the time), while at the same time half-wishing in some part of myself that I would be.  And to me, that’s where Halloween situates itself—in that strange twilight area between fear and the need for the unusual and extraordinary.  There is a story of Stanley Kubrick explaining to Jack Nicholson on set that The Shining was essentially a happy story.  His reasoning, according to Jack, was that any story with ghosts was happy, because it carried with it the promise of something after.  Whatever form it may take, at least it was something.  It is hard to know how seriously he took his own claim, but I am inclined to believe there is a good degree of truth in that statement.  Horror shows us a world where nothing ever leaves.  And Halloween is nothing if not horror’s high holiday.

So it is thanks to Halloween that I began writing.  My first story, written at age eight, was about a woman driven mad by a glowing pumpkin, who butchered motorists stranded on the roadside.  From that first tale, I was hooked, and I have spent a life aiming to write stories that frighten, disturb, and unsettle, that create for readers that dark lens that Halloween always created for me.

I really believe that stories are more important than we even realize; I think that the right story, told to the right person at the right time, can save lives, can give meaning or solace or possibility where none existed before.  And what if, for some of us, those stories feature dread, the nightmarish, the ghostly?  The solace they provide is a different kind but no less meaningful – a picture of the world that allows for the unexpected, the miraculous, even, while making it dangerous and compellingly unknowable.  The groan of old pipes, the squeal of unhinged doors, the sound of what might be footsteps in the attic—these ordinary sounds, on a night like Halloween, or in the confines of a horror story, create the possibility for some intrusion into the everyday—a white face at the window, a skeletal hand reaching from the other side of the door, something shapeless approaching down the hall.

The poet Rilke once wrote that, “beauty is nothing but the beginning of terror.”  What he meant is that in both sets of feeling, we are presented with something outside of ourselves that is less knowable than we are, that has the potential to both uplift and overwhelm us.  For me, so much of Halloween’s imagery straddles that thin line between beauty and terror.

Imagine a scarecrow in a cornfield late at night as you walk down a country lane alone.  Picture the quiet of that moment, as the figure sways in the wind, the sound of the corn rustling, the sense of a peace both rural and enduring, a moment of autumnal calm.  Now, imagine that you start to wonder if the scarecrow’s movements are a little too erratic to be only caused by the wind.  A little too human.  Imagine the face seems full of more than just shadow and strangely-textured burlap.  Feel your heart begin to race, as fear and a strange excitement course through you.  Imagine how vast the night feels now, as you run through it, away from the strange movements of the scarecrow you at first mistook for lifeless.  Your expectations of the world can no longer be trusted, there is more strangeness in it than you ever dreamed.  Anything can happen.

And that is why I love the holiday so much.  As a horror writer, my brain automatically finds suggestions of the supernatural and unsettling in the most mundane settings, at every time of the year.  But never do they come more easily, or more forcefully, than they do in October, when I can feel that old stirring in the blood.  Halloween is a day that can make the heart race, but can also touch it in unexpected ways.  There is more to it than darkness, there is joy in it, a celebratory tendency in us as the world pivots to winter.  At what other time of the year will we allow our children to go to strangers’ doors and beg for food?  It shows a trust and a sense of community that is all too often lacking in the rest of the year.  At what other time of the year can you show up to work dressed as a vampire, or scatter fake body parts across your lawn?  But at Halloween, we all accept it, and smile.  It is a time for us to come together in the strangest of ways.  Even as we accept the darkness that is the bedrock of the holiday, the waning of the year into longer nights and deeper cold, we accept it with high spirits, and smiles, and laughter.  We wear our costumes, and watch our films, and recognize what a truly special thing it is to be alive.

It is a day of the year that continues to surprise me in the best ways.

It was on Halloween last year, that my wife first told me she loved me.  She has always supported my writing.  She has loved me, darkness and all, attics and all, ghosts and all–and that has made all the difference in my life.

So this year whe 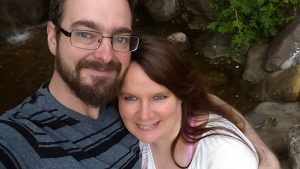 n I light a jack o’ lantern, I will be grateful for this long night filled with crackling leaves, and woodsmoke, and the footsteps of things I dream up and write about.  But I will be even more grateful for her on that day, and all the Halloweens we will share over the course of a lifetime, every costume, every piece of candy, every carved pumpkin.

I strive to make a living chasing and recording nightmares to frighten other people; but she remains the best dream I ever had that came true, the one I will always cherish most, a source of peace in a world that is too often more frightening than it needs to be.

Christopher Clark lives in southern Utah with his wife Tammy and their three kids and four cats.  He works as a library cataloguer during the day, and dreams up new horrors at night.  His Halloween-themed horror story “Masking” will soon be available as an ebook from Frith Books.

One comment on “Halloween Haunts: Tricks, Treats, and Terrors by Christopher W. Clark”