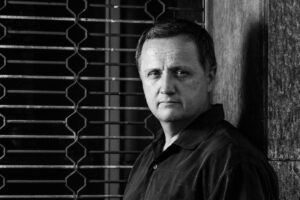 William R.D. Wood traces his love of science fiction and horror back to a childhood filled with Space: 1999 reruns, frequent visits to the Night Gallery, and a worn-out copy of Dune. A good writing day finds him at any of several overlooks on Virginia’s Blue Ridge Parkway deeply immersed in new works of cosmic horror. His short fiction has appeared in Nature, Daily Science Fiction and Cosmic Horror Monthly. His artwork and poetry are usually kept locked away. Will lives with his wife, children and assorted ghostlike enigmas in an old farmhouse turned backwards to the road.

I served eight years in the US Navy as an Electronics Technician, leaving active duty as an ET1(SW) at the end of 1992. I was about as generic an electronics tech as they came. I worked on radar, communications, navigation, crypto, data systems and assorted other things at a variety of duty stations including U.S.S. Joseph Strauss (DDG-16) and Naval Air Station Lemoore, CA.

I had a habit of being assigned to duty stations that were past their prime, equipment-wise. Those “legacy” systems did not like to perform without a lot of attention so free time, like sleep, was always scarce. When I had the chance, I was reading, mostly science fiction at the time, although horror would come blazing onto the scene for me following the first time I saw Aliens. Combine action with science fiction and a bloody splash of horror and I was hooked.

I remember telling stories when I was very young, enough to get myself into trouble since I couldn’t always tell the difference between the real world and that other real world. You know the one. My earliest stories were handwritten plagiarized versions of Star Trek reruns written in my dad’s recliner with the shelf from a busted bookcase placed across the arms as a desk. Imagine the Enterprise crewed by a bunch of ten-year-olds who all sounded like Dr. McCoy and you’re in the ballpark.

The earliest inspiration for horror, though, would have to be an episode of Space: 1999 called “Dragon’s Domain” and the graphic novel adaptation of Alien from Heavy Metal.

The unknown. The unknown we don’t know we’re ill-prepared to face. The unknown we don’t know we should be afraid of. Science fiction is full of the unknown, but the sense of fear is often overshadowed by wonder and the call to adventure. Cosmic horror, my favorite playground, comes with that sense that the universe is vast beyond understanding and any approach made toward enlightenment only leads us deeper in the darkness.

I’ve written very few stories that aren’t military or pseudo-military. I like placing small groups of dauntless people against impossible situations to see what they come up with. They seldom walk away as the victors and when they do manage to mitigate the threat, they don’t do so unscathed. A lot of my service had me alone or in small groups, so I really got a feel for what that was like. Even when the scale is epic, it’s the boots on the ground stories I enjoy telling.

No matter how much I read I never feel widely-read enough to answer that. So many classics deserve a call out! I’ll go with the stories coming out in the SNAFU anthology series from Cohesion Press. So many stories from so many perspectives! I haven’t read them all but the ones I have are fantastic.

I have mixed feelings. Seems like the military is more often than not depicted as blood-thirsty psychopaths, comical grunts who can’t rub two thoughts together or cannon fodder for the real heroes to pick off.

I hope that’s shifting and from my perspective it is, if slowly. Again, maybe I’m just not widely read enough to judge this. I’m looking forward to seeing what my fellow veterans have to say. Regardless, readers expect characters to be real and the more military folks pen these stories, the better.

Many of us are carrying things from when we served, things we can never shed and probably don’t care to talk about. If you know someone who served, reach out and let us know it’s appreciated, that they are appreciated. It’s amazing how easy it is to forget.

I wouldn’t trade my haze gray and underway days for anything. If 26-year-old Will could see 56-year-old Will, I hope he’d be proud of who he became. I know I’m damned proud of him.