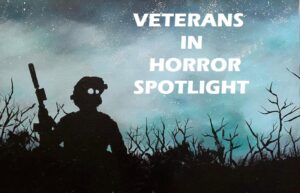 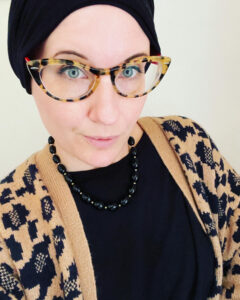 Deke Moulton (she/they) (rhymes with geek, short for Diklah) has had some incredible journeys in her life – from being a punk rock hitchhiker living on top of buildings to an ancient book conservator apprentice at the Adler Planetarium to living in a college learning Arabic to even being a drill sergeant with the US Army. Originally from Chicago, they have traveled all over the United States and the world -living for three years in Italy! as well as in Monterey, California and Columbia, South Carolina – before finally settling in the Pacific Northwest with their spouse and two children. DON’T WANT TO BE YOUR MONSTER is their debut book, releasing summer 2023 from Tundra Books/Penguin Random House.

Hi! I had always wanted to become a Soldier. Perhaps because there’s this romantic idea of running around in the woods, climbing obstacles, doing tough stuff and being a hero – basically all ‘recruiting commercial’ stuff. But it just looked really cool! I originally wanted to join the National Guard (and I even had a job as a journalist lined up!) but I eventually went active duty for the chance to travel. This was way back in 2010 and I eventually served for eleven years before I retired. I trained as an Arabic linguist and even worked as a drill sergeant for two years (so that dream of living the commercial came true)!

Reading and writing were excellent ways to escape. Military service can be beyond stressful, lonely, isolating, and simply needing another world to escape into was such a relief. Even when I’d go out to the field, I would pack along a book (much to the annoyance of leadership) and I got a reputation as something of a nerd!!

I cannot remember a time when I did not write. Even before I could write, I would draw out wordless stories on construction paper and tell the story orally to anyone who would listen. So becoming a published author was simply a matter of time!

I love this question, because honestly, it’s probably vastly different from most people! I absolutely adored reading the Goosebumps series, but I remembered reading and wondering when we were going to get a book from the ‘monster’s perspective.’ There were a few books where a ‘normal’ kid would get transformed, but the goal was always to ‘return to normal.’ I disliked the whole idea of seeing a change as something to fight against, or that wanting to be normal was the only natural conclusion to finding out there’s something different about you. No shade to RL Stine, he’s still a huge fav of mine and his stories are so genuinely terrifying for young readers! I started to write my own stories, hoping to fill in this blank – what would it feel like if there was nothing wrong with being the ‘monster’ in a world that sees monstrosity as wrong?

I end up planting so many little ‘easter eggs’ in my books that have nods to my military experience. Some are really so small, like using former unit numbers. In my debut, Don’t Want To Be Your Monster, I mention that my vampire family has 173 siblings. One of the mortal families that my vampires meet is a military family.

Is it weird if I say Johnny Got His Gun by Dalton Trumbo? I remember reading this book when I was in high school, and being so blown away by the blunt and upfront portrayal of the cost of war – and how those costs are often quieted, pushed to the side and ignored.

I would love to see a better understanding of how the military operates, not just in horror but in the wider work of literature. Too often, it seems like authors imagine a giant, highly technically advanced military complex to combat things like zombies. I once read a book where a normal base had thumb-print activated doors and I could not stop laughing – when the reality is more like the 5 months my barracks building’s door was a line of 550 cord threaded through the holes where the doorhandle used to be. If you’re a civilian trying to include the military in your book? Please reach out to service members!

We are literally just people! When I tell civilians that I’m a veteran, they often seem surprised that I have tattoos, or a different, trendy hairstyle… and like, veterans are people, too! I think the idea is that the people who join the army are these caricatures of ‘straight-faced, no-fun, brainless robots’ or something. And like. I once read a book where the author tried to say that a veteran didn’t know how to pick out their own food, as if we all eat at dining halls and have no say in what we are served?

I would ask civilians to reach out and just ask veterans (or service members actively serving) what the military is like. Especially civilian authors who want to include the military in some way in their work. The military doesn’t have to be this ‘mysterious but scary secret society’ that so many people see it as – you can ask us about what a ‘day in the life of a soldier’ is like -it’s not classified!

I would love to see the demystification of the military, a better understanding of the reason people do join (we aren’t brainwashed or choosing to join up because it’s ‘the only option for the desperate’ or whatever).