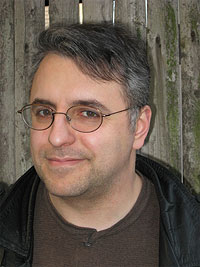 Nick Mamatas is is the recipient of the 2010 Bram Stoker Award for Superior Achievement in an Anthology . He is the author of three and a half novels, including Sensation (PM Press) and with Brian Keene The Damned Highway (Dark Horse). His short fiction has appeared or soon will in Asimov’s Science Fiction, Tor.com, Long Island Noir, Shocklines, Black Wings II, Dark Discoveries, and other magazines and anthologies. In addition to co-editing the Bram Stoker Award-winning Haunted Legends with Ellen Datlow, Nick edits Haikasoru, an imprint of Japanese science fiction, fantasy, and horror in translation.

How would you describe Haunted Legends?
It’s an anthology of “true” ghost stories of the sort one might find in a book in a gift shop at any picturesque locale, except here the stories are written by some of the best writers around—Braunbeck, Lansdale, Valente, Cadigan—instead of by a local weirdo.

Tell us about what inspired you to edit Haunted Legends.
I was shopping at Borderlands Books when I lived in California in 2006 and noticed their small but intriguing selection of “true” ghost story books. I thought then that someday some real writers should tackle the theme. A year later, when HWA put out a call for anthology ideas, the old notion bubbled to the surface.

What was the process like editing the book?
I’d made a promise to myself long ago that if I ever was responsible for an anthology with a major publisher, that I’d open submissions via a general call. Ellen has a great big Rolodex and had many writers to solicit; I added a few names of my own to the solicitation. Then I wrote guidelines for the open submission period. Ellen and I took care of the solicited stories as they came in—rejecting more than a few—depending on whose solicitation it was. So I edited stories by Gary A. Braunbeck, Carolyn Turgeon, Lily K. Hoang, and a few others, and Ellen did her share. Of the 250 stories received via the open call, I shared about 25 with Ellen. Some of them I showed her just because she had worked with the author previously. In the end, we selected four; I edited two of those, and Ellen did the other two.

What most attracts you to editing and writing horror?
I don’t really have a good answer to this, so I’ll choose two of the better answers I’ve heard. Flannery O’Connor used to say, when asked when she wrote, “Because I’m good at it.” Chester Himes, who started submitting and publishing short stories during an eight-year stretch in prison, explained, “I have a lot of spare time.”

What are some of the themes you explore in your work? Are there any topics you consider “out of bounds” even for horror fiction?
I suppose the themes that often come up are radical politics, cities, simultaneity of events, evil located in the banalities of bureaucracy, road trips, chemically altered perceptions, and sudden horrifying enlightenment. Aesthetically, I’m very interested in the sentence and the information-distribution potential of unusual points of view. I don’t think anything’s out of bounds, no, but there are many things I have no interest in writing about, or publishing as an editor.

What are you working on now?
Finishing up a novel called The Last Weekend, which PS Publications will bring out in 2012 if I manage to finish it soon. After that, a novel called Bullettime for CZP. Bunches of stories, as usual. And of course I continue to edit Haikasoru, an imprint of Japanese science fiction, fantasy, and horror in translation.

What do you see as horror literature’s role in contemporary culture?
I’d say it’s largely culturally superfluous. Dark fiction in general, however, continues to be important. Whatever the dark thing or the horror is, in a story, it is the truth of the world. The trick is to make those notional, contingent truths more interesting than they’ve been. Right now, and for a while now, too much of the horror-truth has been, “Something low and dark is out to destroy the middle class, and the middle class has the right to go to any extreme to annihilate the threat!” Boring.

Tell us about an experience or experiences with the HWA that influenced your work or helped you as an editor.
I’m no longer a member of HWA, but when I was a member I met Sean Wallace, who gave me a lot of work over the years, and Ellen, with whom I edited Haunted Legends, and friends like Lee Thomas, Nick Kaufmann, Greg Lamberson, and others. I also was privileged to publish a chapter in Mort Castle’s On Writing Horror, which still pays about ten bucks in royalties a year.

What advice would you share with new horror writers? What do you think are the biggest challenges most writers face?
Read deeply in the genre, and widely outside of it. If you can walk by a bookstore without stopping in, or step over an abandoned paperback on the street without nudging it over with your toe just to see what it might be, you’re not a writer, period. I’d also recommend getting a job or some freelance experience within publishing, but outside of the genre, to see how fields with some money actually work. Newspaper work is hard to get these days, but writing succinctly, and on a deadline, with the public watching, is invaluable. 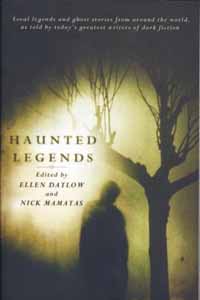 “The Whisperer in Darkness” by H.P. Lovecraft
“The Whimper of Whipped Dogs” by Harlan Ellison
“Florida” by Kathy Acker

Of course one can argue that Lovecraft is writing SF, the Ellison is a crime story, and the Acker transgressive postmodern fiction, to which I’d only say, “Sure.” Also ask again in a week and my answers might change.

What’s your favorite Halloween memory or tradition?
I’m not that big a fan of Halloween. I mean, I like it fine, but I don’t flip for it like many horror people do. I like the leaves and weather changing, which I miss now that I live in Northern California, where the weather never changes overmuch. I suppose I always looked forward to the inevitable newspaper personality profile of some kooky pagan witch. They’re funny.

Given a choice, trick? Or treat?
Treat. I love cookies.

Did they ever find the head?
That’s what SHE said!

One comment on “Stoker Spotlight: 13 Questions with Nick Mamatas, editor of Haunted Legends”