In November: “Michelle Scalise and The Manufacturer of Sorrow”

Michelle Scalise’s poetry has appeared in numerous anthologies and magazines. She was nominated for the 2010 Spectrum Award which honors outstanding works of fantasy and horror that include positive gay characters and the 2000 Rhysling Award for poetry. Her fiction has received honorable mention in Years Best Fantasy and Horror and her first collection, Intervals of Horrible Insanity, was listed as one of the top ten books of 2003 by SFSite. Her fiction collection, Collective Suicide, was published by Crossroad Press in 2012. Eldritch Press has just published a collection of her poetry, The Manufacturer of Sorrow, and Michelle was gracious enough to stop by and answer some questions and share some poetry with the HWA Poetry Page! 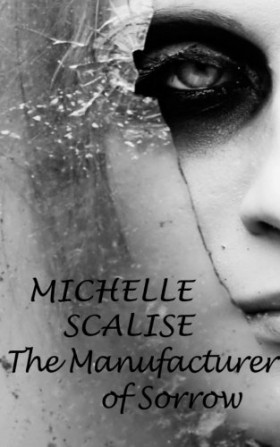 The Manufacturer of Sorrow by Michelle Scalise

HWA: Any chance you still have the first poem you ever wrote, or something equally early in your poetry career?

MS: I began writing poetry when I was 14 so thankfully I no longer have copies of my awful, rhyming teenage angst.

HWA: How does being a poet fit into the rest of your writing life; is poetry or prose your ‘first love’?

MS: I consider myself a poet who also writes short stories. Poetry, after so many years, comes naturally to me. When I began writing as a teenager, I loved using the form to express my pain and sorrows. The fact that I can hide my feelings in words and symbols is why I still prefer poetry. After I had a massive heart attack five years ago I didn’t think about writing for months but when I did, poems poured out of me, angry and bitter. When my husband, Tom Piccirilli, became ill, I didn’t write for almost two years. I was too busy helping him fight. But once I was able to see a sliver of light I gave way to poetry and once again it was very angry in tone. Everything I write is in the horror genre, but everything I write contains truth.

HWA: Who are your favorite poets?

MS: Rather than take a chance of leaving out any current poets and poems I admire, here are some poets from the past that I love and have been inspired by: Sylvia Plath, Anne Sexton, Oscar Wilde, Wilfred Owen, Edna St Vincent Millay, Edgar Allan Poe, Lord Byron, Charles Baudelaire, Dante Gabriel Rossetti.

MS: “Daddy” by Sylvia Plath
(I have a cassette tape of Plath reading poems on numerous occasions for the BBC radio. At her last appearance, just weeks before her suicide, she read “Daddy” and a couple of other poems that would appear in Ariel. The difference in the manner that she reads these last poems compared to earlier ones is amazing to listen to. It is so obvious that she had disregarded the scholastic tone of some of her older work and had found her true voice.)

“Red Roses” by Anne Sexton
(One of the most disturbing poems I have ever read and a brilliant, misleading title.)

“The Ballad of Reading Gaol” by Oscar Wilde
(This was the last poem Wilde published before his death and the only piece of work he was able to complete after leaving Reading Gaol. Instead of appearing in print under his name, the author was listed as C.3.3., his cell number. Years of hard labor in prison destroyed his ability to write which makes this poem even more heartbreaking.)

“Disabled” by Wilfred Owen
(“Dulce Decorum Est” is his most famous poem but “Disabled” is so haunting, especially the last lines. I’ve never read any other ‘war poet’ who can compare to Owen. He died one week before WWI ended.)

HWA: What is your favorite poem from The Manufacturer of Sorrow?

MS: “Red” which was inspired by a discussion my sister and I had. She said, “She hates the color red.” Tom and I were on vacation visiting family and I could not get that line out of my head.

She hates the color red.
I couldn’t see the blood
running from my split lip
after she backhanded me
but it was reflected in her eyes
like brake lights in a windshield.
She never knew how to stop.
It was months after they
shocked her brain bright as lightning,
then claimed she was well.
But I knew the moment she
returned through the fog
that her sanity mask was
no more than a joker’s face.
Pushing at our backs
they whispered,
“Tell Mama how much
you missed her.”
No.
I knew the red
was still there
waiting
with an empty kiss
that reeked of
Bloody Marys.
Someday, I thought,
I’ll plant tulips on your grave.

HWA: Were there any poems cut from The Manufacturer of Sorrow?

MS: Actually just the opposite. My publisher at Eldritch Press, Michael Randolph, asked if I could add to my collection so the last five poems are brand new.

Michael Randolph, Michelle’s publisher at Eldritch Press, had this to say when asked for his favorite poem from The Manufacturer of Sorrow:

“My favorite poem in her collection is ‘Illusionist of the Waters’ a poem to Tom (Piccirilli). I love the fact she dedicated her poetry collection to him and the poem itself is very touching. Even as this is a horror poetry collection, it is great to see her strong love for Tom.”

Illusionist of the Waters
(to Tom)

You bring a violence to the sea.
Wrap the sky in Latin Psalms
So illuminated stars
Might dance in your waves
To music like a sacred thunder.
Flames of incantations
Explode from your fingertips
Gleaning the tangled blue vines of sorcery
And embalming all the oceans
Of your foreshadowing and prophesies.
Alone you float in moonlight and illusions
Where undines crawl to meet your lips
Where the sea becomes your storm.

The Manufacturer of Sorrow can be purchased at Amazon and Eldritch Press.

One comment on “In November: “Michelle Scalise and The Manufacturer of Sorrow””