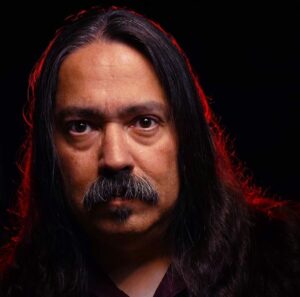 Manuel Arenas is a writer of verse and prose in the Gothic Horror tradition. His work has appeared in various anthologies and journals including Spectral Realms, and Penumbra, both from Hippocampus Press. In 2021 he released his first collection of poetry and prose, Book of Shadows: Grim Tales and Gothic Fancies, from Jackanapes Press. He currently resides in Phoenix, Arizona, where he pens his dark ditties sheltered behind heavy curtains, as he shuns the oppressive orb which glares down on him from the cloudless, dust-filled sky.

I was always into storytelling, even in grade school, but my first serious attempts at writing were poetry. I was inspired by the dark romance of Edgar Allan Poe but, at the time, I didn’t think I had the knowhow to replicate his brilliant style, so I abstained from writing entirely. I was, however, spurred again to write by some of my favorite rock lyricists. The problem with that is most popular lyrics tend to be informal and bend a lot of rules, which might work within the framework of a song, but may not pass muster on the written page. I had some real disappointments when I started submitting my work into genre magazines and got some harsh critiques and dismissive rejections. I recall receiving a rather humbling rejection notice from Weird Tales magazine around 2000, for a couple of poems I submitted, which hurt my ego so badly I didn’t try submitting my work anywhere again till 2018. Both of those pieces have since been revised and were published in Spectral Realms #15, from Hippocampus Press.

I grew up with fairy tales and monster movies, so fantasy and horror have been present in my world from my earliest memories. As a child, I loved the Universal Monster Movies, regularly watched Chiller Theater, Dark Shadows, The Munsters and The Addams Family, and collected monster toys, and memorabilia. I didn’t care much for superheroes; my hero was the Frankenstein Monster. As a teenager, I was turned onto Edgar Allan Poe, whom I really resonated with, and I began to seek out other writers like him. Eventually, I tried my hand at writing my own stories in a Gothic Horror vein, but it wasn’t until I discovered H. P. Lovecraft and the Weird Tales coterie that I really began to understand the possibilities of weird fiction and started to write in earnest.

Not initially, but after reading a few Gothic novels written largely by British authors that always featured Spanish or Italian characters or settings, I felt it was time for a Latin writer to represent that side of things. Although most of my stories are influenced by the things I grew up consuming, like the Germanic fairy tales of the Brothers Grimm, or the folk and Gothic tales of the British Isles, I decided to purposefully write a series of tales that represented Hispanic culture in general. So, I created an imaginary town in Arizona (where I currently reside) called Helldorado, to launch my series of stories in this vein.

I try to add some local flavor, including flora, fauna, cuisines, customs, history, and I occasionally throw in the odd phrase in Spanish. In general though, I just try to represent people as I see them.

I don’t know that it has taught me anything per se but, on a subconscious level, I suppose my obsession with Horror is a coping mechanism to sublimate my fears and anxieties regarding the horrors of real life as well as the inexorability of death. It is a way to talk about unpleasant or taboo subjects indirectly. My credo is that I try to write beautifully about horrible things.

I believe Horror reflects the subconscious obsessions of any given age. Certain tropes and themes become popular because they may be used as metaphors for real life challenges. I myself prefer the Old-World horrors: vampires, werewolves, witches, ghosts, etc., but I do understand the current fascination with zombies and serial killers, as they represent some of the horrors of urban life that people deal with nowadays. I have read as well that there has been an uptick in supernatural horror because people are losing faith in organized religion but still need to believe in something beyond what they perceive in the material world.

Honestly, aside from the odd token appearance, I don’t see them being represented at all. I am of Puerto Rican and Spanish ethnicity but I lived in Mexico for a few years as a teen, and they have a rich culture of supernatural folklore that is begging to be explored. That said, before the luchadores took over, there was a brief Golden Era of Mexican Horror back in the late 1950s and 1960s. Around 10 years ago (give or take), a video label called Casanegra put out restored versions of a handful of these films before the company went belly-up and they were quite good. They were a mixture of Universal Horror, European Gothic Horror, and Mexican folklore. My favorite is probably “La maldición de la llorona” (1961, a/k/a Curse of the Crying Woman) which contains references to Mario Bava’s “La maschera del demonio” (1960, a/k/a Black Sunday) as well as a dollop of Mexican brujería and, of course, the infamous folk ghost, La Llorona. These films were a major inspiration for my Southwestern Gothic tales.

I understand that LatinX author Silvia Moreno-Garcia has written some works in a similar vein, in particular her novel Mexican Gothic (2020), which I hear is very good and I am keen to check out when I get a chance.

I don’t have any favorites as far as literary characters go, but the character of tía Selma, as portrayed by actress Rita Macedo, in “La maldición de la llorona”, is a hell of a villain. She is so intense, powerful, and so dedicated to her cause, she makes all the other characters pale in comparison. Ostensibly the antagonist of the film, I found myself rooting for her, rather than the hero couple, in that movie!

As with most of my literary heroes, my favorite LatinX authors are from the old school. I am partial to the romanticism and legendry of Spanish author/poet Gustavo Adolfo Bécquer, whose story “El Miserere”, from the collection Leyendas (1862) influenced my story “The Burning Ember Mission of Helldorado”, which I hope to be publishing shortly in a chapbook, replete with illustrations by renowned UK genre artist Mutartis Boswell.

I am also a fan of the stories of Uruguayan author/poet/playwright Horacio Quiroga whose “El almohadón de plumas” (a/k/a The Feather Pillow) and “La gallina degollada” (a/k/a The Decapitated Chicken), both from his collection Cuentos de amor de locura y de muerte (1917, a/k/a Stories of Love, Madness, and Death), had a profound effect on me as a youth.

My credo is that I try to write beautifully about horrible things.

Read a lot and read from genres other than horror, so you can get an idea of what good writing looks like. If you are into a particular subgenre, familiarize yourself with the classics, so you know what has come before so you can either use it as a template or avoid it entirely.

Keep a journal to get used to expressing yourself and delineating your thoughts and emotions on the page. I have gone back and lifted entire entries from my journals for publication. Also, don’t worry if your initial attempts at writing are unpolished. Write whatever comes into your head, whatever demands to come out, then clean it up afterward. If you’re stuck on a scene, work on something else and come back to it later.

Also, writing buddies are helpful. I have a couple of fellow writers whom I bounce ideas off of and they have been helpful in pointing out flaws or gems that I couldn’t see, being too close to the material. Of course, one must reciprocate for this to work.

Don’t let anyone tell you what you should or should not write. As Joseph Campbell said, “follow your bliss”. I have been told for years that my writing style and choice of topics were out of vogue, but here I am getting published, so apparently there is an audience for it somewhere. Don’t bother with trends. Be true to yourself, the writers who are remembered are not the bandwagon jumpers, but the ones who followed their own unique visions. And lastly, if you want to be a writer, you must, in point of fact, write.