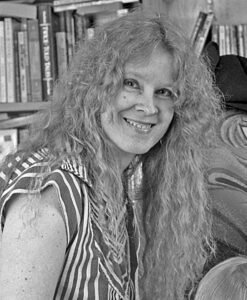 The HORROR WRITERS ASSOCIATION is delighted to announce the immediate renaming of the Silver Hammer award to the Karen Lansdale Silver Hammer award in honor of the tremendous amount of work Karen did starting the HWA. This information will now be a part of the HWA’s permanent archives at Horror.org and elsewhere.

Our physical award will also be updated. Instead of a hammer, a new stylized sculpture is being designed and will be cast by the same company that mints our Bram Stoker Award statues. We look forward to sharing the new design as soon as it’s finalized.

Karen Lansdale will be the first recipient of the renamed award, to be presented to Karen in October 2022.

“HOW THE HORROR WRITERS’ ASSOCIATION CAME TO BE.

Once upon a time dear hearts, there wasn’t a Horror Writers Association, and the writers who specialized in horror fiction existed random of one another, like stars, and they were lost in a dark void.

And then Karen Lansdale came along, and the void was filled.

Let me explain how that happened. Let me try and put a continuous misunderstanding aside so that it might die in a field alone, and let true credit be given where credit is due.

Robert R. McCammon, who was very much involved in the horror field back when it was in its boom, along with his then wife, Sally, met Karen and me in an elevator at a World Fantasy Convention. Hearing me speak to Karen, Rick said, “I bet you’re Joe R. Lansdale. I can tell by the accent.”

Took one Southerner to recognize another. The elevator was slow, but the McCammons and Lansdales hit up an immediate friendship, right then and there.

The elevator stopped, and we sat and visited, and Rick, as McCammon preferred to be called, said he had an idea that since horror was growing, and had become a recognized commercial genre, it should have an organization. He called the idea HOWL. Horror Occult Writer’s League, which to this day I prefer to the soberer Horror Writers Association. He was talking about something along the lines of The Mystery Writers of America, Science Fiction Writers of America, Western Writers of America, and so on.

But there was a problem. He didn’t have the time.

Karen immediately said, “I’ll do it.”

It would be easy to say the rest was history, but it didn’t quite work out that way.

Karen, at that convention, began to make a list of names and addresses of writers who might be interested in such an organization. Rick had come up with the idea, but was too busy to pursue. He had the seed, but Karen planted and water and fertilized it until it grew into a tree.

She went home with names and addresses, and pretty soon we began to receive mail (the old-fashioned kind, as there was no Email) and phone calls from people who wanted to be members.

A plan for what it took to become a member was put into place, ideas coming from me and Rick, and many others, and once that was done, Karen began to put together newsletters. This took time, and it was made up of letters and articles from the new members and Karen ghosted articles and plums of interest for those in the horror field, and soon the newsletters were born.

This was done by using Xerox machines in town at nickel a page, paid by her. Tedious, and ultimately, expensive work. And keep in mind, at that time she held a full time and demanding job,

Karen wrote a few articles for Mystery Scene Magazine about the horror writers’ organization, which by this time had become The Horror Writers of America. Many felt it sounded more professional than HOWL.

Karen was not among them. Me either. I still like HOWL. Sometimes written as H.O.W.L.

But this went on for months, Karen receiving an avalanche of letters, phone calls, and when we went to World Fantasy Conventions, we would set aside time to have members and would-be members, group up and talk up new ideas, and so on.

Karen made notes. When she got home, they went into the newsletter. Members began to contribute more. The organization was real now, still wet from the womb, but kicking its little legs.

The association continued for a time as part of the World Fantasy Convention, eventually morphing into the World Horror Convention, so as to have its own platform.

At some point, Dean Koontz suggested to us that he put some money into the newsletters, take it over, make it more professional. He did and it did.

Karen, by this time, long overwhelmed with Xeroxing and organizing, was ready to let it go. Fly little organization, fly out into the world, your mama lets you go.

So, let it be known, it was she, not Rick, not me, not Dean, who created the organization which continued to grow and became the Horror Writers Association. It leaped from our kitchen table, where Karen operated, and flew out into the ether to eventually become world-wide. That’s impressive.

Karen is proud of that.

I am proud of her.

Alas, her modesty has led to her not receiving the credit she deserves, to be set aside in favor of bigger names, all male, mind you, and she is not even mentioned in the history of the Horror Writers Association. This is a travesty.

She proudly received, many years later, a Richard Laymon award for her contributions, but that is not enough. She didn’t just Xerox and staple, she created.

Her efforts were soon forgotten, pushed aside even. The history is still improperly written. It needs to be revised to reflect the truth. Rick and Dean, and many others contributed, but the mojo that caused it to come into being, was the mojo Karen Lansdale put into it.

I love Karen for her humility all these years, but it frustrates me as well.

Rick had the idea, Dean had the money to broaden the newsletter and the organization’s appeal, but Karen Lansdale founded the Horror Writers Association.

That’s the in and the out of it, the alpha and the omega.

Her proud husband and fan.

“Karen Lansdale performed an invaluable service for HWA at the organization’s birth, and every HWA member around the world should be appreciative of the great work she did.”

The Horror Writers Association (HWA) periodically gives the Karen Lansdale Silver Hammer Award to an HWA volunteer who has done a truly massive amount of work for the organization, often unsung and behind the scenes. It was instituted in 1996, and is decided by a vote of HWA’s Board of Trustees.

The award is so named because it represents the careful, steady, continuous work of building HWA’s “house” — the many institutional systems that keep the organization functioning on a day-to-day basis.

The Horror Writers Association is a worldwide organization promoting dark literature and its creators. It has over 700 members who write, edit and publish professionally in fiction, nonfiction, video games, films, comics, and other media.