Thanks for joining us for this edition of “Know a Nominee,” the interview series that shows you the darkest reaches inside the minds of this year’s Bram Stoker Award nominees. Today’s featured nominee is Paul Tobin, who’s nominated for Superior Achievement in a Graphic Novel for Colder (Dark Horse Comics).

DM: Can you please describe the genesis for the idea that eventually became the work for which you’ve been nominated? In 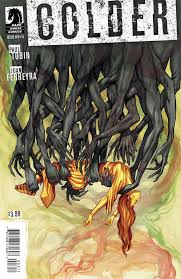 the case of a work wherein you’ve written multiple stories (like a collection) please choose your favorite part and discuss.

PT: Colder evolved after editor Scott Allie (at Dark Horse Comics) asked me to develop a new series. At the time, I’d been primarily doing all-ages material, and wanted to branch out into other markets / genres. So, I took something that genuinely frightens me, insanity, and ramped it up a few hundred degrees. Horror, to me, is the fear of the unknown, and insanity means that you have no ground for “knowing” at all. It’s the darkest of the dark when you can’t even understand the light.
DM: What was the most challenging part of bringing your idea to fruition? The most rewarding aspect of the process?

PT: A lot of the most difficult work was the research, the background development of the characters, a wealth of material that never made it onto the pages, and that I knew wouldn’t’t do so, but it’s still necessary in order to really flesh out the characters and understand in my own mind the directions they’ll take, the reasons they act as they do, etc. It’s work I honestly enjoy, but that doesn’t mean that it’s not challenging. As far as the most rewarding, I have to say it’s being told that artist Juan Ferreyra and I have unsettled people. It’s not hard to scare people, but truly unsettling them … that’s a high compliment.
DM: What do you think good horror/dark fiction should achieve? How do you feel the work for which you’ve been nominated fits into that ideal?

PT: It should never be cheap. The monster leaping from a closet makes people scream, but when the scream is over, the horror is over. Afterwards … the horror is revealed and can be dealt with. I think great horror systematically removes your footing, so that you feel less and less sure of where you’re standing, and instead of a scream you just have that gnawing unease inside of you, and the only real knowledge you have is that something is wrong. Something is entirely alien, unknowable, and inevitable, and you’re in its relentless path. I think that Juan and I accomplished that largely by feeding on the universality of hunger; it’s omnipresent, and in our book that hunger literally feeds on sanity… meaning Declan, the main character, can’t even trust what he sees, leading to a further loss of “footing.”
DM: I’m curious about your writing and/or editing process. Is there a certain setting or set of circumstances that help to move things along? Where do you often find yourself getting stuck, and why?

PT: Colder was released as a series of single issues, ultimately collected in the Colder trade paperback, so here I’ll stick to addressing my comic book writing rather than prose. When I start a project, the first thing I do is decide what I want so say, overall. Next, I break down the main players in the story, developing their backgrounds, their lives, etc. Then I do an overall outline intermixing the events and the characters, very broad at this stage. Afterwards, I break it down into chapters, or issues of the comic. It’s all chaos at this point, still, incidentally, despite how systematically it sounds. Basically, at this point, I’ve only created the elements of the chaos. Now is when it starts to come together, though. I do page-by-page breakdowns for each issue, tightening those broad strokes, and getting a foundation for the pacing. Then, I go panel-by-panel for each page, dropping in all the dialogue, and the basic scene. At that point, it’s just a matter of fleshing it out in a manner that somebody else (editors, artists, colorists, letterers) can understand. And … voila! A comic. Of course there’s rewrites, and so on. But, basically, voila.

As far as getting stuck, I’d say the danger zone in the panel-by-panel breakdowns. Sometimes when I’m working on them I’ll realize I haven’t allotted enough space, meaning I have to take space away from other pages. And since that space is rarely available, the editorial knives have to come out, and decisions have to be made as to what’s the most important.

PT: Writing consistently is KEY. Writing is a game of momentum, so finding time to do it every day is an imperative. Don’t give yourself a break. And one thing that I find very helpful (especially when working in prose) is word limits. Almost all the writers I know have a word minimum per day, and that’s great … you should have one. But just as important is a word maximum. Whenever I hit my word limit, I have to stop. The two main benefits of this are that I don’t write until I reach the end of a scene or a “good” spot, which I would otherwise do. That would mean that I had to start every day “cold,” as opposed to picking up in the middle of a scene, preserving my ongoing momentum, and not needing to start the laborious process of getting the entire project in motion every morning. It’s just been there, waiting, simmering. Also, a word limit helps preserve momentum in another way. Let’s say your minimum is 1,000 words, and you have a killer 6,000-word day. Well, the next day you can easily feel, “Hell with it. I don’t feel like writing, and I’m way ahead on where I’m ‘supposed’ to be.” So you reward yourself with a day off, or two days off, etc. And that’s the opposite of a reward. That’s a quick ticket to a failed project.

PT: I love conventions because of meeting old friends, and new ones. It’s a common theme with professionals, really. I think that’s because we spend so much time in our own caves, in our own minds, that it’s fantastic to meet with actual living people. Awards such as the Bram Stoker are important for many of the same reasons … acknowledgment of effort and existence. Writing is a solitary craft, so the occasional backslap is MUCH appreciated.

One comment on “Know a Nominee Part Twenty-Nine: Paul Tobin”