Jewish Heritage in Horror: An Interview with John Baltisberger 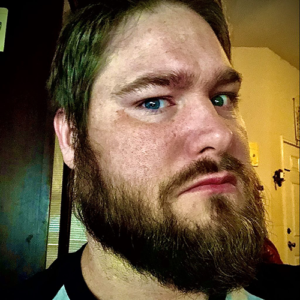 The author of War of Dictates, Abhorrent Faith, and Stabberger, John Baltisberger is a Splatterpunk nominee who writes speculative and genre fiction that often focuses on Jewish elements. Through his writing, he has explored themes of mysticism, faith, sin, and personal responsibility. He lives in Austin, TX with his wife and his daughter.

Though mostly known for his bizarre blend of Jewish mysticism and splatter, John defies being labeled under any one genre. His work has spanned extreme horror, urban fantasy, science fiction, cosmic horror, epic verse, and he has even written a guide for mindful meditation. You can see his work at www.KaijuPoet.com

I think that I’ve always been interested in story telling. It’s been a focal point in my play and in my life for as long as I can remember, and maybe more than that, I have always been obsessed with creating something, a piece or work, or art, that can outlast myself. Writing, and writing a book that gets printed physically is a fulfillment of that obsession. It is a physical manifestation of my hard work and of achievement.

I didn’t want to write horror. I wanted to write urban fantasy. I wanted to write stories about fantastical elements that were hiding just beneath the veneer of polite society. But every time I would hand a story over to a beta reader, they would come back with “this is creepy” or “what the hell!?” And so, it became obvious that what I really wanted to write, or what I had some talent in, was writing scary and creepy stories. It wouldn’t be until much later that I discovered the term Splatterpunk and realized that my brand of social commentary colored by ultra-violence was a genre.

Do you make a conscious effort to include Jewish characters and themes in your writing and if so, what do you want to portray?

So, this is a generic question sent to Jewish authors, I know it, you know it, the audience knows it. I write specifically Jewish splatterpunk, almost every book I write is centered on Jewish issues, characters, and mythology. My fourth book, War of Dictates was #1 on Amazon for “Books about the Talmud” several times. “Book of Ze’ev” is a series dedicated to a Jewish monster hunter and exorcist. And on top of all of that, I run Aggadah Try It, a indie publishing house for Jewish speculative fiction. Bringing Judaism into fantastical literature is intensely important to me and who I am.

Most often, people are interested in finding out more about Judaism, because all they know is stereotypes and what they’ve assumed. So that’s fun. The heart breaking thing is that many times I’ve had readers come up to me and admit that they thought the antisemitism in my books was a made-up element. I try to be unapologetic in my Jewishness and, while many of my contemporaries try to shine a light on how Jews are just like others. I revel in the cultural, theological, and philosophical differences and work hard to highlight those.

How have you seen the horror genre change over the years and do you think there’s more that can be done to educate readers and authors on Jewish culture?

At one point, someone posted “Looking for Jewish horror, but not golem related” and they got lambasted by the community for wanting “A roast beef sandwich hold the roast beef.” People assume Judaism is a one note culture and usually just equate it to Christianity-light or a “Christianity Alpha version 0.5” I find it intensely insulting and I strive every day in my writing and interviews to disabuse people of the idea that a culture that has been around for around 6000 years only has “golems” to offer the literary world.

This is the reason I created Aggadah Try It. I believe Jewish literature can have a solid home and niche within the horror, and literary community, but only when people shed their pre-conceived notions of what it is, and embrace what we have to offer as authors.

How do you feel the Jewish community has been represented thus far in the genre and what hopes do you have for representation in the genre going forward?

Terribly. Nine times out of ten when someone asks for a Jewish horror book they are pointed towards something written by a Non-Jewish person about the holocaust. Often times with a romanticism where a Jewish prisoner falls in love with a Nazi guard. At the same time authors and presses are putting out Jewish stories and books by Jewish authors writing about other aspects of Jewish life that go largely ignored.

Do you think there is a difference between Jewish horror and horror that is Jewish or are they one in the same? For example, the realism of the Holocaust is horrifying and the otherness that comes with it compared to the folkloric horror of dybbuks, possession and other creatures?

Even in these questions, we boil down 6000 years of Jewish history and horror to the holocaust. 6000 years! What about the inquisition which was initially started to hunt down “Secret Jews” what about the expulsions from Europe, the pogroms in the Ukraine, the Christian Crusades who warmed up for war by murdering and raping entire Jewish towns. The problem with separating Jewish horror and horror that is Jewish, is that in the end you begin to separate the People from the Experience. The truth is that all Jewish monsters come from our experiences. Either horrors we try to grapple with or borrowed and adopted from one of the many countries Jews have fled to over the course of the last several thousand years.

Who are some of your favorite Jewish characters in horror?

Ashmandai, without a doubt, the Prince of the Sheydim, there’s so many wonderful midrash and aggadah about the character and it paints him as a intensely complex character. I love the Baal Shem Tov and his fight with the Werewolf, all the various queens and princesses of demons such as Lillith and her sisters. One of my favorite things about Jewish myth is it is rarely ever anything black and white.

Write. There is so much that goes into making this a career, but the first step, and the most important one is to keep writing and telling stories.

Be unafraid and unapologetic, let yourself be angry, and don’t worry about being censored or how accessible to non-Jewish readers you are. We have to carve our own niche, we have to celebrate ourselves, and I WILL be here for you.