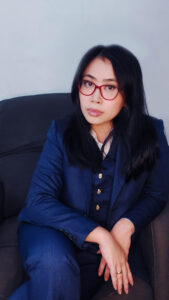 Rin Chupeco is a nonbinary Chinese-Filipino writer born and raised in the Philippines. They are

the author of several speculative young adult series, including The Bone Witch, The Girl from the Well, The Never-Tilting World, Wicked as You Wish, and the adult vampire fantasy series Silver Under Nightfall. Formerly a 9-to-5 grunt, they now write fiction full-time and live with their partner and two children in Manila. Find them and their upcoming works at rinchupeco.com.

I have always wanted ever since I was seven years old and it’s been a lifelong dream since. I have always been addicted to books at a very young age and started reading at two years old, which I think is a bit earlier than many would expect. I was a shut-in growing up, so books quickly became my best friends. I’ve never known a time when I didn’t want to write.

In many ways, I tend to identify more with the monsters and the creatures lurking underneath my bed than other people. I’ve always felt strange and awkward and different growing up, and Asian horror stories tend to focus on the monsters and their backstories rather than on the people terrified by them which I imagine is different from how they are often portrayed in Western media. The concept of feeling like an outsider is more apparent in the former, so I feel more seen identifying with the ghosts than with the living.

I wouldn’t say that this is a conscious effort; I write the stories I want to write, and since I live in the Philippines and nearly everyone I interact with here is Asian, it’s the most natural thing for me to associate my stories with how I live my own life. I try to write about general themes from a personal viewpoint – of how ideas of isolation and obedience to elders and conformity affect me, which I then translate into my works as something I hope is a universal experience as well.

I would say that the worst things in the world tend to people rather than the monsters. I’ve often found that monsters are just a reflection of people at their worst and that blaming creatures of the night for being cruel is just a way to renounce themselves of that blame.

I love that there’s a bigger demand for the psychological aspects of horror, which I think is much more devastating than the usual hack-and-slash genre. I would love to see even more cerebral stories about monsters screwing with your mind as I’ve been seeing more of those in recent years.

We still have a long way to go, especially when it comes to a Western audience. I’ve always felt that adapting works from Asian horror for a Western market falls flat because of the Western tendency to fill in the story with overlong details. The Ring, for example, puts too much details on horses and character background that never ties in with how Samara’s ghost manifests and it takes much of the mystery out of it. There’s often too much emphasis on making the heroine out to be the best and most sympathetic character instead of her serving as the vessel to incite equal parts sympathy and revulsion in the story’s ghost instead. (I imagine that using A-list actors for the movies often affects where that emphasis lies.) In many Asian horror stories, it’s not uncommon for a supposed protagonist to be unlikable if that’s what’s required to understand both their and their ghosts’ supernatural motivations.

Juon: The Grudge is one of my favorite movies ever, and Kayako is one of my favorite characters. Very rarely can someone so horrific inspire both disgust and empathy, and that’s always been the type of story I love best. I also love Tomie from Junji Ito’s manga series just because of how unrepentant she is about destroying everyone’s lives around her just so she can propagate her species.

Alma Katsu is someone I admire for her works – I sincerely believe she can make writing a telephone directory tense and terrifying. I am not one to separate Asian diaspora from Asian though, and I’d also love to recommend Junji Ito, who I also mentioned earlier because his manga is absolute mindfucks that would make you afraid of simple things like spirals or mountainsides or even grease oil. I also enjoy works by Pyun Hye-Young – The Hole is one of her books and it’s brilliant, very much like Stephen King’s Misery but also much more compact and needing little to invoke tension and fear – and also Otsuichi, particularly his book Goth which has a lot of body horror and is messed up but in so good ways.

Atmosphere has always been key to me. Think about the things that you are afraid of – the darkness, insects, being alone, etc. – and practice trying to put those feelings down on paper and see what other emotions that can evoke in you. Describe them not with details, but with tension, with what those fears bring out in you.

Authors are always afraid of rejection, but more often than not those rejections come from within rather than from other people. The running joke among writers is that if you’ve never been rejected by a publisher, then you’re not actually a real author. Don’t be afraid to write your truth, and that there is someone out there who will love your work if only you could take the chance to let them read it.