Jewish Heritage in Horror: An Interview with Brenda S. Tolian 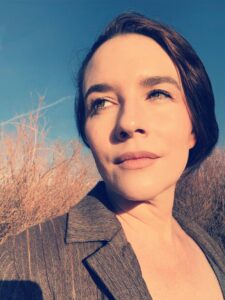 Brenda S. Tolian, MFA ~ is a Gothic/ Horror writer from Southern Colorado. She is a member of the Denver Horror Collective, Horror Writers Association, Horror Writers Guild, AWP, and the Angela Carter Society. She is a graduate of Adams State University, Regis University, and a Doctoral Student of English Pedagogy- Literature at Murray State University. She collaborates with Alchemy Writers Workshop and is an instructor at Ouroboros Screaming.

Her work has appeared in Haunted Mtl.com, the anthology 101 Proof Horror, the Denver Horror Collective’s anthology Consumed Tales Inspired by The Wendigo, The Jewish Book Of Horror, Twisted Pulp Magazine issue 3 and poetry included in the HWA Poetry Showcase Vol. VIII. Her book Blood Mountain is due out soon with Raw Dog Screaming Press and other projects are forthcoming in 2024.

I have always written—song lyrics, poems, and terrible short stories. Horror was the first medium to give voice to the things that needed pulling, like a bad tooth. I saw Stephen Graham Jones and Mario Acevedo read in my MFA program at Regis. Their readings lit a fire in a revelation that dark writing could be the medium through which my stories could be born. That night I went back to my room and trashed all that came before and began the story that would be Blood Mountain—which is coming out in June from Raw Dog Screaming Press.

I had things, traumas, stories that needed to live, but they were dark and unformed. The words seemed to collect like gravel in the mouth, not unlike the Ba’lat Ov in my account contained within The Jewish Book of Horror. Loss and pain pooling, growing wanting expression, and horror was the genre that symbolically allowed for expression without exposure. I can talk about the particular pain that women and those ‘othered’ endure with dark lyricism and metaphor. There is no other medium like it. Horror is quite powerful.

Do you make a conscious effort to include Jewish characters and themes in your writing, and if so, what do you want to portray?

I wouldn’t say that. I don’t really choose my characters, they choose me. I do consider religion and culture and its appropriation, the pain it can cause, the division it can create, and the separation. Jews, POC, LGBTQ+A, and Women, have all had to endure oppressive shadowed, liminal spaces. It is time for space and liberation for everyone.

I don’t like to talk about my illness, and I won’t now but it has been a means of discovery through my doctors and specialist. I am still coming to understand what Jewish means to me. Through testing for a particular condition, I learned I had Jewish genetics a particular unique set. I wasn’t raised in the faith or culture, so I am not entirely sure what it will mean for me. Only a particular Jewish group has the two markers present in my condition. I have been a part of a significant medical study for many years, so learning this was mind-blowing and I still don’t know what to do with it or if I will do anything at all.

How have you seen the horror genre change over the years, and do you think there’s more that can be done to educate readers and authors on Jewish culture?

I know of many writers who have submitted only to be told it’s too Jewish. How shameful is that? How much are Catholicism, Protestantism, or paganism included in horror? It is time to have more diverse and intertextual voices. You cannot say you want to liberate while you silence.

I hope there is more. More Jewish voices, more LGBTQ+A voices, more POC voices, more women’s voices. It’s not up to the writers; we submit—I challenge the publishers/agents to put their money where their mouths are and liberate the submission box and raze the gates.

How do you feel the Jewish community has been represented thus far in the genre, and what hopes do you have for representation in the genre going forward?

Many like Elana Gomel, Daniel Braum, and Josh Schlossberg are doing amazing things, and I and so many others want to read more. We await publishers to give more space for diverse works. I think that publishers are doing better but there is more to be done.

Do you think there is a difference between Jewish horror and horror that is Jewish, or are they one and the same? For example, the realism of the Holocaust is horrifying, and the otherness that comes with it compared to the folkloric horror of dybbuks, possession and other creatures?

I am not sure I am qualified to answer this. How does one quantify the horror of the Holocaust? How does it come out in fiction? Sometimes it is within the realism, too terrible to put into words, that the monsters arise as symbols of the terror they reflect.

Who are some of your favorite Jewish characters in horror?

I’m not sure there are specific characters, but it’s the authors for me.

Definitely the work of Elana Gomel, Daniel Braum, Josh Schlossberg, Josh Malerman. Honestly, there are so many, and you might not know it.

Write, editing can come later. It’s time to push the boundaries, especially if you are a diverse voice.

Tell your story, the one that sits on the tip of your tongue, speak it into being like a prayer, like a spell.