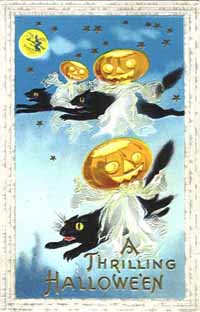 This is an excerpt from my forthcoming book Halloween, to be published by Reaktion Books in 2012. If you’re not familiar with Reaktion, they do beautifully designed pop culture histories with color illustrations, and Halloween will inaugurate their new line of books on holidays. This section discusses the evolution of Halloween’s most beloved symbol.

Around the end of the 19th century, the American Halloween celebration was in the process of acquiring what would become its most popular icon: The jack-o’-lantern carved from a pumpkin. The legend of Jack, the blacksmith who outwits the Devil, appears in hundreds of variants throughout both Europe and America, and typically ends when Jack dies and, being denied entranced to either Heaven or Hell, instead wanders the earth with his way lit only by an ember held in a carved-out turnip. In Britain, children had carved Halloween lanterns from large turnips (or “swedes”), and in Scotland there are contemporary reports of young guisers carrying carved, lit turnips (called “neep lanterns”) and going door-to-door asking, “Please help the guisers.” At the village of Hinton St. George, a strange, Halloween-like holiday called “Punkie Night” falls on the fourth Thursday of October, and involves children carving intricate designs into the skin of the mangel-wurzel, a large beet-like vegetable normally grown as cattle feed. The children parade through the village streets singing this song:

In America, pumpkins–the large, bright orange fruit native to the new world and harvested in late fall–had been carved into grinning faces for decades prior to the arrival of Halloween. Washington Irving immortalized the carved pumpkin in his 1820 story “The Legend of Sleepy Hollow”, and although the piece would later become a holiday classic, thanks to its combination of whimsy and fright, it made no direct mention of Halloween.

In his 1850 poem “The Pumpkin”, John Greenleaf Whittier links the pumpkin to another holiday–Thanksgiving–but goes on to recall carving “wild, ugly faces” in pumpkins lit from within by candles, and telling fairy stories by their light. Jack-o’-lanterns aren’t mentioned in most of the Halloween party descriptions from the 1860s and 1870s; an 1880 article suggests they aren’t even as useful as cabbages at Halloween. But within a few years, the legends of Jack the Blacksmith, Washington Irving’s Ichabod Crane, and the American tradition of carving faces into the giant fruit would combine to create the jack-o’-lantern.

In 1898, Martha Russell Orne, in her seminal holiday pamphlet Hallowe’en: How to Celebrate It, noted that a Halloween party should be “grotesquely decorated with Jack-o’-lanterns made of apples cucumbers, squashes, pumpkins, etc.” and she also recommended creating “bogies” from pumpkins: “A pumpkin is carefully
hollowed out until nothing but the shell of the rind remains. One side of it is punctured with holes for the mouth, eyes, and nose, and made as nearly as possible to resemble a human face. A lighted candle is then fastened within, the eyebrows are put on with burnt-cork, and a demon-like expression given to the features…the bogie is put in a dark room, where the young people may stray on it unawares…” Orne’s playful instructions seemed to catch on, not always to the satisfaction of teachers, who by 1906 were complaining, “Why should these carved faces always be made so ugly?”

By the time of 1912’s Games for Hallowe’en, jack-o’-lanterns specifically carved from pumpkins were indicated for party decorations, table decorations, lighting effects, and games, and jack-o’-lanterns of pasteboard “should be made just large enough fit over the gas jet” (in this time prior to the widespread introduction of electricity). The jack-o’-lantern had at last been crowned king of Halloween.

Lisa Morton won the 2010 Bram Stoker Award for Superior Achievement in First Novel for The Castle of Los Angeles, published by Gray Friar Press. In addition to nearly 50 short fiction appearances in books and magazines, Lisa is the author of two acclaimed novellas, The Lucid Dreaming (which won the 2009 Bram Stoker Award for Superior Achievement in Long Fiction) and The Samhanach. She is also one of the world’s foremost authorities on Halloween, and has been seen on The History Channel and the Blu-Ray edition of Trick ‘R Treat talking about her favorite holiday. Her first fiction collection, Monsters of L.A., will be out later this year from Bad Moon Books.