Interview with Winner of the Rocky Wood Scholarship 2018 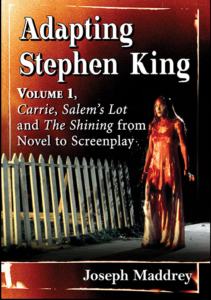 Winner of the HWA’s ROCKY WOOD SCHOLARSHIP in 2018, Joe Maddrey has recently released the fruit of those labors with the release of Adapting Stephen King Volume I: Carrie, ‘Salem’s Lot and The Shining from Novel to Screenplay from McFarland press.

In a way, this book was an offshoot of two of my previous books. The first one was a biography of Stephen King, for which I read all of King’s published works. (Everyone says they’ve read all of King’s books… but they’re usually lying. I even made it through The Regulators.)

The other one was a study of the ten-year development process of the movie Brainstorm (https://global.oup.com/academic/product/brainstorm-9781916084223)

When I was writing that book, I had access to over a dozen drafts of the script as well as the people who wrote them. I loved doing so much primary research and discovering the hows and whys behind that film. Since I knew King’s fiction pretty well, I decided to attempt a similar study of Stephen King film adaptations.

The first thing I did was search for old interviews with the writers, producers and directors of the films, to learn what they’d already said about the development of the screen story. That was easy because most of these films have been covered exhaustively in genre magazines and other books about “Hollywood’s Stephen King.”

Then I started searching for scripts. I did a lot of digging in special collections around the country and made some exciting discoveries. For example, did you know that Robert Bloch wrote a pilot script for a ‘SALEM’S LOT spinoff TV series back in 1980? I did but I never dreamed I would find it. One day, I was searching in the UCLA archives for Stirling Silliphant’s unused script for a SALEM’S LOT movie and I found both scripts.

Once I found the scripts for the films I wanted to study, I reached out to the screenwriters and hit them with long lists of questions about their creative process.

The HWA, especially the Los Angeles chapter, has been a huge inspiration for me ever since I joined in 2015. Being among so many accomplished, hardworking writers—and hearing firsthand about their trials and accomplishments—has kept me writing.

A few years back, I was talking to Lisa Morton about my plans for Adapting Stephen King. I had recently found a treasure trove of primary documents related to the making of Stanley Kubrick’s The Shining in a special collection in Texas, but the copying costs were considerable. Lisa encouraged me to apply for the Rocky Wood Nonfiction Award,  which helped me move forward.

Getting the award also gave me a sense of responsibility. I now had an obligation to honor Rocky’s name (no small task, since he was one of the world’s preeminent Stephen King scholars) and to pay back the HWA’s gesture of faith by producing a book that would break new ground.

I think I’ve pulled that off. In particular, I believe that my chapter on the development of The Shining goes deeper than any other book or essay on the subject. I sent a copy to Kubrick’s co-writer Diane Johnson and she said she’s confident it will become a new “Bible” for Kubrick fans. I hope so!

Most books on King adaptations compare the original source stories to the finished films and casually attribute the differences to the director’s vision. Most books offer only anecdotal information about the development and screenwriting process. Even though screenwriters are the first ones to reimagine a story for the new medium, they usually don’t get interviewed about their visions and their creative process because they’re working in a director’s medium. But everything depends on the writer’s script and I’m surprised by how few critics take the time to read—let alone analyze—the scripts and try to understand the writer’s contributions.

My goal was to explore how—and, more importantly, why—different writers have reimagined King’s stories the way they have. Even for readers who don’t care about Stephen King, I think this book provides valuable insights about screenwriting and the Hollywood development process.

I also wanted to draw attention to some neglected remakes of King’s material and examine how the adaptation process changes when a writer has to reimagine multiple pre-existing versions of a story. So I didn’t limit myself to the most famous film adaptations of Carrie, ‘Salem’s Lot and The Shining… I studied the remakes as well, and interviewed the screenwriters behind those versions.

I had to draw heavily on things I learned from writing about King’s fiction and nonfiction, film genres and specific filmmakers. I think it also helped that I have twenty years of production experience—not on big Hollywood movies but on documentaries and cable television. I have a working knowledge of the filmmaking process and I know how much screen stories can change between pre-production and post-production, and how many influences a writer has to consider on any production. I think that helped me ask better questions.

Volume 2 will cover commercial adaptations of all of the Night Shift short stories, so I’ll be looking at CHILDREN OF THE CORN, CAT’S EYE, MAXIMUM OVERDRIVE, GRAVEYARD SHIFT, SOMETIMES THEY COME BACK, THE MANGLER, a few TV episodes, a few Dollar Babies, and some stuff that has never seen the light of day. Also, CREEPSHOW! It’s going to be a bigger book with different insights.

Obviously, adapting a short story is very different from adapting a novel. There’s often more opportunities for the screenwriters to make the stories their own, which I think is a necessary part of the adapting process. Plots don’t necessarily have to be re-invented for the screen but the stories have to be re-imagined—because adapting isn’t translating, it’s co-creating. Since King wrote most of the Night Shift short stories before he became “Stephen King,” a lot of the stories in that book are bleaker than his novels and they often have a more outrageous sense of humor. It’s been fun exploring what different screenwriters did with all that.

You can buy Adapting Stephen King Vol. 1 direct from the publisher here: https://mcfarlandbooks.com/product/adapting-stephen-king/

I maintain a blog called “Movies Made Me” (maddrey.blogspot.com) and I’m pretty active on Goodreads. I love hearing from readers and other writers there.