Halloween in the Shadows by Amanda Trujillo

“My name is Victoria Winters and my journey is beginning…a journey that will take me to a strange, dark house, high atop Widows’ Hill.  A house called Collinwood…”

So begins the first episode of “Dark Shadows” (DS), a popular 1960’s soap opera featuring an otherworldly cast of vampires, werewolves, ghosts, witches and other spooks germane to the Halloween season.  As each episode opens with a monologue to set the scene, so it opens with a view of “Collinwood,” the sprawling chateau where the show’s action unfolds.

The image of Collinwood, with its tower, dormers, and multiple chimneys, is as iconic as the vampire Barnabas. Although the interiors of the great estate were stage sets, the exterior of the house and the grounds belong to Seaview Terrace, a mansion in Newport, RI, where I have been privileged to spend Halloween in the company of other DS fans.  This Halloween will be our tenth in the house.  Over time, party attendance has grown from two-dozen people to nearly 100.

The present Seaview Terrace is an amalgamation of an older home by the same name and a Washington, D.C. estate called DuPont Circle.  In 1923, the Edson Bradley family had their D.C. residence dismantled and shipped, piece by piece, to Newport, where it was grafted onto the pre-existing house on the site. The result, unveiled in July of 1925, is one of the largest, most eclectic of the Newport mansions; a place where, even after multiple visits, it’s easy to get lost among the twisting hallways connecting the vast wings. 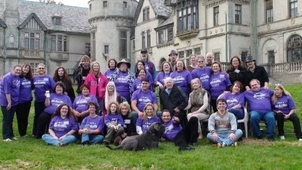 When Seaview reverted to a private residence in 2009 after a long stint as a school dormitory, its owners, the Carey family, who had befriended members of the DS community over the years, generously opened their home to a select group of fans for a Halloween party and overnight stay.  I was thrilled to be offered this opportunity.  I had visited Seaview briefly once before, but never imagined spending the night there. I certainly never expected to make Seaview a Halloween tradition.

Indeed, that first weekend at the mansion has since become a week-long round of Halloween-themed activities, allowing guests to indulge their inner children. A goody bag exchange launches the event. Board game marathons, trivia contests, musical chairs, movie screenings, and a talent showcase follow, supplemented with day trips to creepy locales like Lizzie Borden’s house in Fall River or Salem, MA, and culminating in a themed costume dance party. One of our regular attendees is a professional magician whose show comprising feats of mentalism and occasionally levitation is a highlight of the party.  Another beloved activity is the tour of the ‘haunted basement,’ a fun house stocked with creepy animatronics and other surprises.

The basement really is haunted. So is the rest of the house.

Some of my friends have heard or felt another presence in their rooms.  Others have reported finding toiletries strewn around the floor, or losing small items at departure time that later reappear packed in the suitcase.  Sy-Fy Channel’s “Ghost Hunters” investigated Seaview in 2011. They weren’t disappointed.

The Seaview parties also allow us fans to demonstrate our love of DS.  The show’s 50th anniversary was in 2016.  That Halloween Night, to celebrate, we gathered in the ballroom of “Collinwood” to watch the episode that had aired on Halloween, 1966 (in which Vicki tells Burke Devlin about seeing Bill Malloy’s ghost). 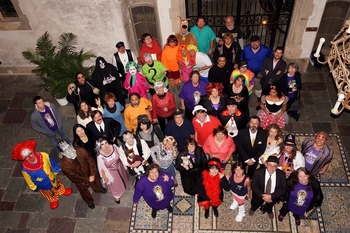 Spending Halloween in a house associated with favorite fictional spooks is surreal.  DVDs of DS play in the background of the festivities throughout the weekend.  You can watch the house on TV and pick out the window of the room where you’re sitting, then step outside on the very lawn where a character just walked.  When the haunting DS soundtrack echoes through the halls, one almost expects to see Quentin Collins’s malevolent ghost leering over the balcony.

Quentin and Barnabas are there in spirit.   Fans contributed a replica painting of Jonathan Frid as Barnabas that hangs over the fireplace year-round and a Dorian Gray-esque portrait of Quentin for the attic.

Above all, the parties serve as a reunion of extended fictive family. DS fans are a tight-knit bunch. Over the years, we’ve watched each other grow and reach important milestones. We keep in touch between official gatherings and sometimes even vacation together.  Sadly, we’ve also seen too many dear ones leave us unexpectedly: Judy, Diane, Ben, Leyla.  For the few days that we’re together again under one roof, we can renew our friendship and make memories to last through to the next year.

On a final, more personal note, my trips to Seaview and Newport inspired the setting of my latest novel, which involves a haunted house.  Prompted by readings about the Borley Rectory and Cheltenham hauntings, I initially toyed with the idea of an old English manor house as a home for my characters.  But I’ve never been to England and doubted I could do the location justice.  Newport, with its historic mansions and colorful history, substituted nicely.  And if my haunted house bears the slightest resemblance to Seaview, I hope my DS friends get a kick out of it. 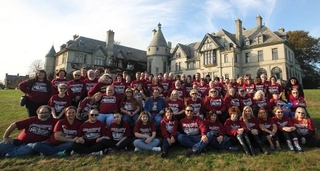 Seaview Terrace and the gatherings there serve many purposes.  The parties are fundraisers for the restoration of the mansion and a means of thanking the Carey family for inviting us into their beautiful house. They also allow DS fans to express appreciation for a TV show that, for many of us, shaped our fascination for horror, history, and storytelling.  Furthermore, the mansion’s eerie ambiance fuels the imagination.  The happy memories accumulated over the years of all the fun we’ve made in the house have developed Seaview into a seat of friendship and joy, the nearest thing to an ancestral estate.

What better place to celebrate the spookiest of holidays than in the house of dark shadows? 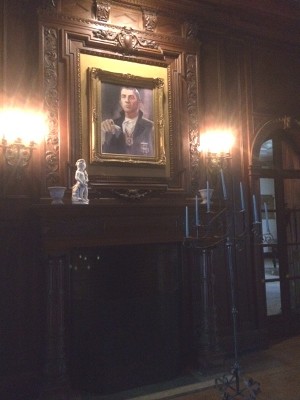 BIO:  Amanda Trujillo is a member of the HWA-Los Angeles chapter. She lives in the South Bay. Amanda has contributed to The Physics of Dark Shadows: Time Travel, ESP, and the Laboratory (Cultural Studies Press, 2008) and CEA Greatest Anthology Written (Celenic Earth Publications, 2017)

13 comments on “Halloween in the Shadows by Amanda Trujillo”