It sounds corny, cliché, but the truth is that when I saw my mother’s body in the coffin at the wake, she looked…good. Like she was taking a well-deserved nap. There was no trace of the pancreatic tumor that had swollen her belly so she looked 8 months pregnant, her skin was luminous and there was even a slight blush to her cheek. When I reached out a hand to touch her forehead, it was a true shock to find it cold. Cold because, after all, this body had just been pulled from a chiller, all to maintain the illusion that death was simply another form of sleep. A sideshow for the living.

Burial rites say a lot about culture. We like ours neatly packaged, a bloodless affair that approximates death about as closely as hamburger resembles butchering. The root of horror is tapping into that squeamish reality—the fear of our own death, the decay of our own bodies, that experience which, like every snowflake, is unique, unknowable. Although two hundred years from now, the likelihood that everyone reading this now will be dead is a pretty safe bet.

If this disturbs you, here’s a video of a baby goat playing with puppies.

For the remaining 10%, I want to tell you about a Tibetan lama who was stuck in Miami just as a massive hurricane was about to hit. All of his students were asking—no begging—for him to leave, but he had things to do in Miami, important things. My husband called him. He said, “Khenpo, it’s not safe. All the people are leaving.”

Khenpo laughed. “All the people who are afraid of dying are leaving.”

But his was a culture that practiced ‘sky burial’, a tradition at the polar opposite of our funeral productions. In Tibet, a body would be taken out to a field, hacked to pieces (to make it easier for the vultures to consume), and left as an offering. Even the blood would be collected and mixed with tsampa (kinda like oatmeal), so the vultures could eat that too. The skeletal remains would then be collected. Skulls were turned into kapalas, or skull cups, sometimes they were used for damaru (double-sided drums), and the marrow of thighbones was cleaned out to make kanglings (trumpets). I knew a lama who had a kangling made from the thighbone of a woman he’d befriended. It was one of her dying wishes, for her body to be used this way. In the Dzogchen tradition, bodies are just husks, the material thing that contains the spiritual thing, and only temporarily at that.

Which doesn’t mean they’re not scared of death too. But gripping it so closely is their confrontation of that fear. Lamas would spend nights meditating in the charnel grounds where the sky burials took place, working that fear out.

And in a way, that’s why I write horror. Horror is where I look at my own death, where I confront all the worst possible scenarios that can/could happen to someone in life, or even just in the wildest corners of my imagination. It’s where the memories of my mother’s wake lives, where I look down at the plot of ground she bought for my own body (New Englanders plan ahead), where I sit and lean against a tombstone that has space for my name. Try to deal. Horror is climbing into a casket, trying it out for size, and then climbing out again. The world always seems sharper afterwards. Clear.

Because death is the ultimate compass for how to live your life.  Think about it long enough and you realize what’s important. It’s only by looking hard into the darkness that we see, and appreciate, the light.

TODAY’S GIVEAWAY: J. Lincoln Fenn is offering one signed paperback copy of Poe. Comment below to enter or send an e-mail to membership@horror.org with “HH Entry” in the header. 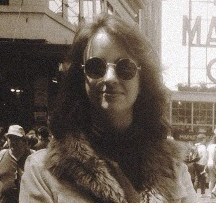 About POE: Winner of the 2013 Amazon Breakthrough Novel Award for Sci-Fi/Fantasy/Horror. Excerpts can be found on Amazon, GoodReads, and WattPad. “A delightful, bravura piece of gothic pop…fans of Neil Gaiman and the aforementioned Buffy will be immediately taken, but there’s a literate edge to the pyrotechnics that makes for an unlikely and welcome marriage between the spook story and literature of altogether less ectoplasmic substance.” —Publisher’s Weekly

2 comments on “Halloween Haunts: The Darkness by J. Lincoln Fenn”