“Why do you write horror?” they ask (whoever they are—generally people who avoid horror at all costs, who don’t like to be scared).

I’m never sure how to answer. Despite being a writer, there are some things I can’t quite articulate. Because I was obsessed with Goosebumps and Scary Stories to Tell in the Dark as a kid? Because I’ve always liked being a little creeped out? Because horror stories are just the ones I happen to want to tell?

Not great answers. Not wrong—but incomplete, perhaps. Skirting the easy edges of the thing of it, which is intangible, possibly even inexpressible. Why do we do the things we do? Why do we like the things we like?

What it comes down to, maybe, is this feeling. A feeling I’ve long tried (and likely failed) to describe.

You’re a Halloween person too, right? So you know what I mean. An ephemeral, delicious feeling. A thrill of joy and fear—a combination as bafflingly perfect as salty and sweet. The joy of fear. The delight of the dark and mysterious, the strange and uncanny. Halloween is the threshold between joy and fear.

Is that why it’s so hard to describe?

It was while writing a Halloween-themed short story recently that a revelation startled me: this is what all my writing is about, isn’t it? Trying to capture the Halloween feeling. I write horror to crystallize that inexplicable feeling into little snowflakes that become stories. The story, “Hallow House,” in the anthology These Lingering Shadows, tries to grasp the Halloween feeling when the main character, Jordan, is sitting in a pub: “A contingent of twenty-somethings burst in the door with a flurry of wind and leaves … and he felt that old tingle of autumn—a whisper-chill, at once redolent of his boyhood friends’ laughter echoing in the cool night and filled with the knowledge that all those friends were dead.” Death and laughter. That old tingle of autumn.

This is the threshold between worlds that my writing wants to explore—between reality and the supernatural. The Halloween feeling is a liminal feeling, and maybe this is why I’ve long been drawn to liminal spaces.

Hallways, tunnels, staircases: the between-places always seem to work their way into my writing. Tunnels—enclosed, inescapable, dark—appear in both my novels, It Will Just Be Us where there are old tunnels beneath haunted Wakefield Manor, and When the Night Bells Ring which features a mine with something ancient lurking deep inside. The uneasy endless hallways of a behemoth, rambling mansion, so easy to get lost in, creep through Wakefield Manor and Hallow House alike, and the terror of becoming lost in the endless passages of the mine haunts the pages of Night Bells. I just can’t seem to get away from these places. They follow me, or perhaps I follow them.

I’m not alone in finding a strange allure to liminality. Look how popular the Backrooms are (if you’re not familiar with the Backrooms, you’re in for a treat as you head down that particular rabbit hole). There’s a whole mythology behind this labyrinth composed entirely of liminal space, of endless hallways always turning, always continuing, and never getting anywhere. The stories and videos of the Backrooms are captivating even as they are unsettling, because you are neither here nor elsewhere. You are between. You are nowhere.

And Halloween itself is liminal, existing between summer and winter, poised between light and dark. It is a passage to another place, the blurring of life and death… yet somehow, being between them, it is more of both. It is life and death. Laughter and ghosts. Joy and fear. It is a celebration of the inexplicable, the beyond, that which is impossible to name, though I will keep trying, of course, because it just won’t leave me alone, whatever it is.

We just know it as this feeling.

And we are more alive because of it.

TODAY’S GIVEAWAY: Jo Kaplan is giving away a signed hardcover copy of When the Night Bells Ring, which releases on October 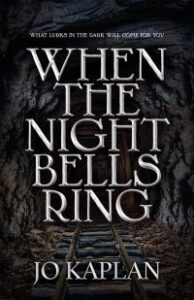 Bio: Jo Kaplan is the author of It Will Just Be Us and other works of horror & suspense fiction, with stories appearing in Fireside Quarterly, Black Static, Nightmare Magazine, Vastarien, Horror Library, Haunted Nights edited by Ellen Datlow and Lisa Morton, Miscreations edited by Doug Murano and Michael Bailey, and elsewhere (sometimes as Joanna Parypinski). Currently, she is the co-chair of the HWA LA chapter. She teaches English and creative writing at Glendale Community College. Find more at Jo-Kaplan.com.

Amazon links to works mentioned in the blog post:

About When the Night Bells Ring:

In a future ravaged by fire and drought, two climate refugees ride their motorcycles across the wasteland of the western US, and stumble upon an old silver mine. Descending into the cool darkness of the caved-in tunnels in desperate search of water, the two women find Lavinia Cain’s diary, a settler in search of prosperity who brought her family to Nevada in the late 1860s.

But Lavinia and the settlers of the Western town discovered something monstrous that dwells in the depths of the mine, something that does not want greedy prospectors disturbing the earth. Whispers of curses and phantom figures haunt the diary, and now, over 150 years later, trapped and injured in the abandoned mine, the women discover they’re not alone . . . with no easy way out.

Excerpt from When the Night Bells Ring:

What do you eat?

She comes in the night

Why do you thirst?

For she has been cursed!”

“What lady?” I demanded.

And he told me there was an old woman who said she was thirsty, who took him by the hand, which tingled in a funny sort of way. He told her he knew where she could have some water. “But Mama,” he said, his voice all grave and serious, “I don’t think water is what she wanted to drink!” For she disappeared, didn’t she, before he could take her for a cup of water.

Though there was no one anywhere near, his words chilled me; I looked around us, peering into the dark for signs of life. I felt a crawling sensation all over, like the scratch of insect feet pattering across the skin, and I took him by the hand and dragged him back inside, where the fire was warm and bright. The bell rattled angrily as I shut and latched the door. Once inside I felt calmer. I turned to the boy and said, “All right, Oscar. Tell the truth, now. What were you doing out there?”

“There is no lady,” I told him, and I must have made some wild move­ment, as if to strike, for the boy raised his arms defensively, and that’s when I saw his hand. I pulled it closer to examine it, asking, “What is this? What did you do to your hand?” As I always must do with him, I demanded sev­eral times before he would let an answer pass his lips. He said he was only holding hands with the lady, “but she was all funny.”

The sight of those tiny puncture wounds all over the palm of his hand revolted me, and I let go of him as if his flesh had delivered me a shock. They were strange and unnatural, those red marks all over his soft child’s flesh— and I was cold, dreadfully cold.

“Little Oscar,” said Sophie as she came to him gently and asked to see his hand. She tutted and fretted over him like a mother hen, took a rag and some water from the bucket, and gently patted the wounds, though it was rather more for the sake of pure tenderness than healing, for any amount of bleeding had already ceased.

I was so cold, I was all a-tremble. I sat beside the warming fire, but it seemed to have no effect. Sophie finished her ministrations and sent Oscar to bed, and he dutifully obeyed, though he kept throwing me small angry glances, as if I were the one who had hurt him. Even Sophronia looked at me with something like shame. And she did not speak to me at all afterward!

Is he to turn even my sweet, dear one against me? Is that what he wants?—to use his mischief and cruelty to make my Sophie believe me a villain? He is rather too clever for a boy of five summers. Yes, he is far more devious than I had believed. What if he is doing all of this just to spite me? For I am certain he has hurt his own hand on purpose. What else could he have done out there except lay his hand upon a cactus so that when I saw it, I could not help but be reminded of the children’s song: “She comes in the night / And pricks Father’s feet”? To scare me with that rhyme? He wants to drive me mad! It is why he pretends that Charles’s ghost plays with him, why he rings the bell in the dead of night! There is something of the Devil in that boy.

I will not let him succeed, though his manipulations have already af­fected me. For when I looked out into the night and saw him coming to­ward me—it was only my tortured imagination that made me believe for a moment he was not alone. The sky was bright with stars, and the moon writ large—for I could see its subtle cast in that otherwise black abyss. And in that light I thought I saw (only because Oscar has insinuated this idea into my mind) another figure standing just beside him, holding his hand. What I thought I’d seen had so startled me that I’d tripped, and when I regained my feet, I found Oscar quite alone, as he had surely been the whole time.

Reviews for When the Night Bells Ring:

“Jo Kaplan has fashioned an experience like none other, where forgotten curses and future terrors collide. Highly recommended for horror fans whose TBRs consist of VanderMeer-worthy climate disaster novels and the creepiest of creature features, reading When the Night Bells Ring is like slinking through a mine shaft with only a single, dying flashlight to rely on… while behind you, the sound of footsteps—and the tinkling of bells—grows ever-louder.”
—Christa Carmen, author of Something Borrowed, Something Blood-Soaked

“Engrossing, atmospheric, and shot through with claustrophobic horror, this is the kind of story you can get lost in.”
—Paulette Kennedy, author of Parting The Veil

“When the Night Bells Ring is the most terrifying vampire tale in half a century. Jo Kaplan could make a bucket feel haunted, and the horrors she populates old mines and frontier towns with arm the dark with nightmares for days after a reader visits them. Truly, it’s a brilliant novel of survival, greed, and corruption that lingers in the mind like a wound that won’t heal.”
—Jef Rouner, author of Stranger Words

One comment on “Halloween Haunts: That Halloween Feeling by Jo Kaplan”