Halloween Haunts: How to Plan a Hallowedding by Joanna Parypinski

I knew I’d made the right choice of mate when I suggested to my fiancée that we have a Halloween wedding, and he agreed.

While the internet is rife with ideas for Halloween weddings, it’s still considered a non-traditional theme. That’s perfect for me because I find many traditions revolting, particularly those with bigoted origins (like a father “giving away” his daughter because she is an object that must be passed from one man to another). But as soon as we decided on a Halloween wedding, there came the question: how does one actually pull this off? Traditional weddings come with a built-in template, so the first step is deciding whether to customize the template or to ditch it entirely and start from scratch.

The easiest way to create a spooky atmosphere is with décor. Think jack o’lanterns lining the aisle, black Manzanita tree centerpieces adorned with bats and spider webs, and autumnal colors of plum, crimson, and burnt orange. Yes, these things warm your cold, black heart like a mug of hot apple cider. You can also infuse Halloween into all those little details of wedding planning too, like our Save the Dates which look like a Ouija board (Is there a wedding in your future?), or the playlist (Halloween hits, of course).

For some, Halloween evokes thoughts of death, and they can’t comprehend why anyone would want a celebration of love to be darkened with the macabre. Yet the spirit of the holiday evokes something more, to me, than merely death and decay—although there is a kind of beauty in the decay of autumn foliage, and a kind of delicious mystery in the air. Fall is not so much about endings as it is about transformations, for the world doesn’t die each autumn but changes into something new. And isn’t that what a wedding is—the transition to a new season of life?

I believe many people have traditional weddings because they assume that’s what they’re supposed to do (think of all those nonreligious people who still get married in a church), but as horror writers, how often do we actually do what we’re “supposed” to do? At some point or another, I’m sure we’ve all been questioned as to why we would ever write such disturbing, gruesome things—oh, can’t you just write something pleasant? No: we like breaking society’s rules. And we like Halloween, which in some ways is all about breaking the rules of civilized society.

So, a wedding that celebrates the mystery of change while simultaneously breaking the rules? Be still, my heart!

I’m by no means an expert (yet) as the wedding is still a year away, but I’ll leave you with some tips if you’re considering a Halloween wedding:

Joanna Parypinski is a college English instructor by day, and a writer transfixed by the dark and macabre by night. She has had work published in The Burning Maiden Vol. 2, Dark Moon Digest, New Myths, and more. In her spare time, she walks around cemeteries and plays the cello—but, sadly, she does not play the cello in cemeteries. Perhaps she will have to change that. Find more at her website, joannaparypinski.com. 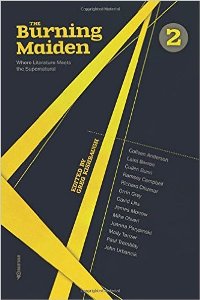 In this second volume of The Burning Maiden anthology we continue our mission to present the finest storytellers of supernatural fiction and verse: legendary literary voices like Ramsey Campbell, Laird Barron, David Liss, James Morrow and Richard Chizmar—but also breakout talents like Paul Tremblay, Molly Tanzer, Cullen Bunn and Joanna Parypinski. They offer us literary and unforgettable glimpses into the darkness of human nature.

Read an excerpt from “Graveman” by Joanna Parypinski (in The Burning Maiden ,Vol. 2)

Death had a crush on Sam Winters. He knew this because she had told him.

He was seven the first time he met her. She’d been standing in the shade of a monstrous, many-tentacled Live Oak in the cemetery. The way it happened was this:

Sam and his friend Rusty were playing zombies in the hospital where Rusty’s dad was getting his chemo, and in the midst of their groaning, lurching, and screaming, they found the staircase to the roof. The lock on the door was busted, and they emerged into the crisp autumn air. Sam peered curiously over the edge of the roof at the parking lot; the cars were brightly colored pieces of hard candy below.

“One of the nurses in there is a witch. She told me that anyone who jumps off this roof will be able to fly,” he invented, toeing the edge.

“You don’t want to know what it feels like to fly?” Sam stepped up to the edge, the wind tugging on his shirt. He pulled off his blue fanny pack that he carried everywhere and dropped it over the side to see how fast it fell. It bounced once on the ground before rolling away. Inside of it was a compass, a box of bandages, a miniature flashlight, and a magnifying glass that he sometimes used to burn ants.

In the end, Sam’s lie was suitably convincing. Rusty sidled up next to him, eyes wide and curious, and together they stepped off the roof.

One comment on “Halloween Haunts: How to Plan a Hallowedding by Joanna Parypinski”