Halloween Haunts: Murder, a Cemetery, and Halloween by Lou Lrera

There is a cliché specific to writing we’ve all heard; write what you know. How does a writer of horror, know? Horror research can take the writer, as investigator, down some extremely disturbing rabbit holes of discovery. I hope it goes without saying, writers of hideous crimes and murders, obviously don’t commit the crimes to document the details and horror of torturing and ending lives. Horror authors have produced classic tales of mayhem, and it would be ludicrous to think one would need to build a Poe inspired dungeon, cleave some poor soul in-half under the blade of a swinging pendulum, to add hyper realism to a description to make a reader’s skin crawl.

Since I am a visual writer, when possible, I search out the thing I need to discover. I’ve been to a morgue to witness an autopsy. A neighbor worked as a homicide detective. I asked him if he could get me in to see the process and shoot photos. He said, “Murder’s unpredictable, so if I call anytime, day or night, you’ll be ready—right?” He said that last part with a raised eyebrow. I said yes, and he called. The dead forty something man was killed by smoke inhalation from a fire set by an arsonist. Is that murder? You betcha it was.

The morgue as expected, was in a basement. I must admit I walked in like there was broken glass covering the floor. I was introduced to the diener, his intern, and the pathologist—the homicide detective stood by. The job title of diener (morgue attendant—note the word die in the job title), does the dirty work. He/she lugs around the corpse, preps it for the pathologist, and their job from there, varies. The diener I spoke to and observed, did most of the cutting, which included cutting behind each ear, across the back hairline, and pulling the skin and hair inside out, over the face. Sort of like an inside out, sock, with frayed hair sticking out from the bottom. It’s very disconcerting and bizarre to look at a human in that state. The exposed skull top is cut off and removed, exposing the brain. When we see a human skeleton which is the ultimate stripped-down version of ourselves. It seems so far removed from us; it doesn’t give us the hebe jeebies. During the Halloween season, human skulls and skeletons are the mascots of the month.

Thankfully, I didn’t need to view a charred body. One thing the CSI shows can’t communicate is the smell of an autopsy. In this case it wasn’t the sweet sickly smell often described from a decomposing human. It was something else—a warm, rancid collection of globules, little yellow pellet-sized balls of fat, sliced open intestines, frozen in the process of a halted digestion and the overall smell of the reddish gray internal organs.

After the organs are removed, examined by the pathologist, noted, they’re stuffed into a green trash bag, that sticks out of the empty abdominal and chest cavity. Like the inside out face, a garbage bag protruding out of the body torso cavity is like watching someone clean out a refrigerator of nasty food that’s gone bad. Very strange. The bag is unceremoniously stuffed back inside the body and stitched together.

Had enough yet? Probably not, thanks to Caitlin Doughty’s, decade long YouTube hit, Ask a Mortician. She’s done more to rip the clothes off Western burial practices that anyone that I’ve encountered in media.

So, what does any of this have to do with Halloween? Well, I’ll go back to a writer’s research. Behind my house, which looks like it’s a continuation of my back yard, is a two hundred-and fifty-year-old cemetery. The most infamous resident is E. Howard Hunt (If you remember your Watergate history). I walk there almost every day. I breathe deep, then take notes. Of the hundreds, maybe a thousand raised headstones, there are three bronze headstones, cast to look like granite. The only giveaway is the color (a tinge of blue, not oxidized green). The Crow family, all deceased before 1890, provided me with some gems for names I’ve used in my writing. Plessie Carpp died young, but she lives on in a story I’m working on.

The biggest rush in the cemetery are the night walks, especially after midnight. The moon directly overhead, 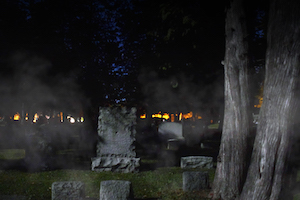 depending on the moon’s cycle, dictates the time for an optimum well-lit walk. On the wanning side, it can be as late as 4:00 AM. The only obstacles are the shadows cast by the forty to sixty-foot evergreen and deciduous trees. This is an old place, some of graves were moved here in 1878, and I’m not so sure that there is a corresponding reinternment by the proximity of some of the headstones. Unless some of the bodies are two-feet tall.

There is a thrill of the most unique kind walking alone, late at night in the kind of place that has inspired all types of monsters in the horror genre. I honestly don’t believe zombies will come for my flesh, but I must admit the sound of a snapping twig in the distance does get my attention. The full moon provides the coolest atmosphere. I’ve taken my DSLR out there on a tripod to try to capture the misty, deathly quiet feeling, but it just doesn’t translate visually. I use a three-second exposure, which does produce an interesting image.

As 2020 would have it, we had thirteen full moons. There were two full moons in October, the second full moon was a blue moon on October 31st, Halloween. Could anyone ask for more? The night was clear and perfect. Days of planning went into the night. I had constructed a giant child’s doll, with facial feature of an angry bulldog. I placed the effigy in front of a massive obelisk headstone, buried low wattage spotlights, and connected a switch. I had set up what could be called, an art installation from hell. I used the graveyard as my backdrop, my set. The nighttime and the moon were cast members.

I put on my makeup, then waited for the neighborhood children to show up. The lights went on, the moon glowed, and I, dressed as a zombie, shambled from tombstone to tombstone, moaning and limping my way toward the kids. They squealed and hollered; they were not intimidated. They knew it was me from the start, That crazy old guy from down the street. They ran into the graveyard to revel in the beauty of the night and Halloween. After all, what good is Halloween if you can’t pretend to be afraid and have some fun doing it?

Lou Rera writes horror, supernatural crime and subjects that delve into the darker side of 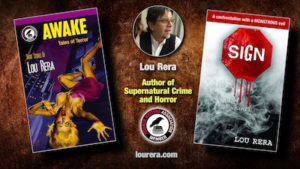 humanity. He is the author of AWAKE: Tales of Terror (2020), a collection of thirteen stories, and SIGN, a supernatural thriller of deception and murder (2014). He is a member of the Horror Writers Association. Lou also is a musician and will play bass in the musical, Hair, each weekend during the month of October of 2021.

TODAY’S GIVEAWAY: Lou Rera is giving away one paperback of each book: AWAKE: Tales of Terror, a collection of 13 stories, and his novel, SIGN, a story of deception and murder.  Comment below or email membership@horror.org to be entered into the drawing.

3 comments on “Halloween Haunts: Murder, a Cemetery, and Halloween by Lou Lrera”