One of my favorite Halloween traditions was getting or creating a costume. Being a closeted gay kid, it was always cool to pretend to be someone or something else. My earliest memories of costumes were of these cheap ones with a plastic mask with a rubber band on back and a vinyl torso piece that tied on. There were ghosts, witches, vampires, and ghouls and other odd sorts—all generic to buy at a TG&Y, a five and dime store. It was a step up from a sheet with holes cut out for eyes which was the poor kids choice in my neighborhood. And more decent than the trend in 1977 of Underoos. Super Friends (the original Justice League) were big then so kids were running around, basically in their underwear, pretending to be heroes. I was six-years-old and right there with them in my Superman Underoos with a red pillowcase for a cape.

As I got older, I became a Monster Kid. I think the film Prophecy, the one with the mutant bear, did the trick; it terrified me, but I was curious to see more. I saw the trailer for The Boogens when I was ten and would reenact a scene, where a woman was pulled into a trapdoor, at school by imaging to be pulled under a library table—all in fun. I watched horror all the time, scouring the TV Guide for late-night listings, and I grew to love Elvira’s Movie Macabre. I could not get enough and I wanted to dress up and scare people on nights other than All Hallow’s Eve.

One of the interesting things about becoming a teenager in the 80s was that it was totally uncool to dress up on Halloween because that was for kids and babies. During those years, I would only dress up as a zombie or a killer for lo-fi home movies with a rented VHS camera. (I wish I still had those tapes.) I would order latex and fake blood from ads in Fangoria magazine and try to create something scary with variable results. Everything changed in 1985 as I had a turbulent time as a teenager and lost my way for a while, but that is a different story.

In the late 80s, I made a set for a potential horror film complete with a red, spray-painted pentagram wrapped in barbed wire and manacled racks with symbols from the Necronomicon, a book of the dead that I bought at the mall. My family thought I was going down another rabbit hole—during the last vestige of the satanic panic—because of this torture chamber set I had made with my friends. It was fun figuring out how to do the special effects and create a costume for the killer, but a hooded robe, rigged weapons, and gallons of blood (Karo corn syrup and food coloring) did not help my case of not being in a cult or something sinister. Nor did the monster and gore collage and horror poster collection on my bedroom walls win my family over. Ultimately, the film was never made due to a car wreck. A sign of more of those turbulent times.

A Halloween after, in the 90s, I bought an authentic Michael Myers mask that looked just like the one in the movie. The hair was actual horse hair and the white rubber had to be talcum powdered to be put on. Another time, I was working at a bar and the entire staff got acrylic, vampire teeth custom made. The fangs would pop right in and instantly I felt changed into a creature of the night. It was great dressing up again, stalking and scaring people as a young adult once a year.

Age mostly mellowed everything and the fun of pretending to be someone or something else became rare, the escape felt different out of the closet of youth and away from the bar scene. Choices became simpler, on those occasions, with easy options of a Star Trek redshirt (a crew member that always dies) or a sailor suit. One exception was when I was on a work trip in New Orleans and brought white and black, face and body make-up, camouflage pants, combat boots, and some hardcore, dieselpunk googles. I got painted up in the hotel room by co-workers and went out to have wild, rainy night on Bourbon Street as a War Boy from Mad Max. The best touch was shiny and chrome. I had a can of spray icing, that looked like metallic paint, that I could spray on my teeth and yell, “Witness me!”

All of those times over the years were magic. Nostalgia brings them back to mind when the leaves start to fall. I am older now, but one day I look forward to dressing up again and losing myself in character in the cool, autumn air of Halloween.

David Sharp is a writer of queer and punk fiction. His horror works include Escape from D 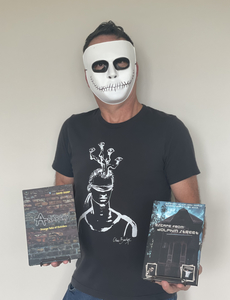 The unmade, teenage horror film (mentioned above) morphed into a short story, The Deadfall, and is one of the strange tales within Anarchy and is available in Dark Lands for free.