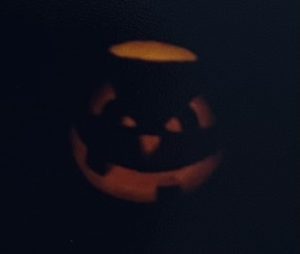 When he took up the large carving knife, the same one used to carve the Thanksgiving turkey, my heart thumped as if afraid he might turn and attack me or one of the cats that languidly strolled about the newspaper-covered kitchen floor. I was a little kid, still a single digit, but my imagination was an untamed jungle full of predatory monsters.

The world, as we know, is scary enough without imaginary horrors. I was the kid who was afraid of everything. Skinny and meek and often picked on, I was scared of loud noises, rollercoasters, spiders, school, other kids, sharp objects, strangers, and the dark.

Knife in hand, Dad turned slightly to look at me, one eyebrow going up, a mischievous grin spreading his thick beard. The knife stabbed into the pumpkin with a slick punch and a dull pop, and he worked the knife like a saw.

I clearly see him grabbing the stem and lifting the top the pumpkin, its stringy insides dangling. He was a mad doctor who’d uncorked the top of an unsuspecting patient’s skull.

I scooped out all that pulpy, slimy goop. Pumpkin guts is how I thought of it. You could use a spoon but it was easier to carve at the insides with bare hands and splat the cold sinew onto the newspaper.

My father carved the faces.

The jack-o’-lanterns were each slightly different but all riffs on a similar theme—an angry, hostile scowl. Even the smiling ones were grins of maliciousness, the teeth sharp, the mouths wide, the eyes sideways triangles with sentient, Sharpied pupils.

I can’t be sure (my father died in 1992; I was eleven), but I believe the inspiration for these nightmare pumpkin faces

came from The Magic Pumpkin by Lucille E. Sette. We read it every Halloween. It was not shelved with the Garfield and Berenstain Bears and Hardy Boys books crammed on my bedroom shelf; The Magic Pumpkin held a special place among my father’s collection of horror novels, which he kept in a coffin-shaped bookcase.

On the cover, there’s three jack-o-lanterns. From right to left, they regress from an ultra-happy, goofy grin to a downward, angry grimace with two sharp fangs protruding. The story progresses the other way, of course.

My father’s jack-o’-lanterns looked like cousins to that mean one. The Magic Pumpkin is typical fare for young children—angry man becomes warmhearted saint through magical intervention—but in my active imagination, I didn’t picture my father’s creations morphing into happy, joyful greeters. No, I saw them as evil sentries. Lining our driveway, they were wardens to a hellish world—especially with candlelight flickering inside them—and if they came alive it would be to chomp at people’s ankles, sever a kid’s foot clean off, or gobble someone’s toy poodle or Chihuahua.

They were scary. Halloween was scary. And on Halloween, my father embraced his scary side. He decorated the lawn with gravestones and mannequin monsters and strobe lighting and fog and horror-movie music and changed himself into a ghoulish, blood-splattered terror that would would emerge from that coffin and zombie-stalk giggling trick-or-treaters.

The creepy jack-o-lanterns were warnings that only the bravest should dare approach.

Most years, I was too scared to be outside for all this fun. I’d peek out the living room window or curl up in my bed and write in a black-and-white marble composition book. I was writing a story about a detective hunting a supernatural killer.

It’s funny—I was eight or nine and too scared to be outside with the monsters and mayhem, yet I was writing a story about exactly the same thing.

Horror has always been an outlet for me, even when it’s been too scary to face.

Writing is violent too.

Cut open your head and scoop out your brains and slop them on the page.

Yet carving pumpkins and writing stories is also about magic. 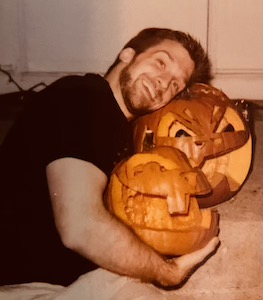 Tradition says jack-o’-lanterns are supposed to ward off evil spirits, but I think they’re also greeters, inviting the spirits who are likeminded, we lovers of the macabre, of all things scary.

On Halloween the streets fill with costumed children, skeletons and gravestones and giant spiders decorate lawns, and on every front porch, grins a jack-o’-lantern.

Halloween is a time to embrace our fears and our imaginations.

We writers do that every day. This was especially true for me when writing my latest book, Revival Road. At over 160,000 words, it was like carving the world’s largest pumpkin, and then lighting it with the enormous candle of my imagination.

When I carve this year’s jack-o’-lanterns, at least one will have to be large-mouthed and sharp-toothed. And when I light the candle within it, I will think of my father and of the stories I write, and I will believe in magic.

TODAY’S GIVEAWAY: Chris DiLeo is giving away an electronic copy of Revival Road. 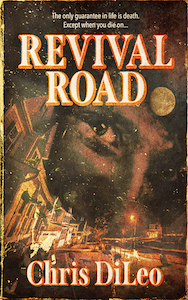 Chris DiLeo is the author of Revival Road, The Devil Virus, and Dead End. He is an English teacher in New York. 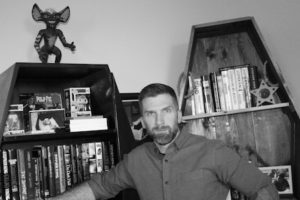 In the woods behind her house, Maria told Juliette to close her eyes.

Juliette did as asked. Freckles saddled her nose. At fifteen, she was all-American cute, pulling stares from boys at school, especially in their fifth-period English class where even the teacher watched her cross the room to sharpen her pencil.

“He walks in the woods,” Maria said.

Bailey, their third wheel, stared at the printout in her hands. Saggy jeans and an awful Ramones T-shirt made her look like a little kid.

Bailey’s mouth creased but she started reading, voice unsteady. “He walks in the woods. He lives in the spaces between the shadows. He haunts our dreams. He comes for us. He is hungry. He must be fed.”

“This is stupid,” Juliette said. Her blue dress billowed around pale knees.

Maria slipped the knife from a front pocket.

Fading sunlight streaked the sky red and orange. Mosquitoes hummed. Trees towered all around. In the distance, little kids laughed and cars thumped across a bridge.

She sighed, slapped her arm. “I’m getting bit.”

“He walks in the woods. He lives forever. He is eternal.”

Another arm slap. “Seriously. We’re not little kids. This is dumb.”

Darkness creeped through the trees, shadows eating the light.

Maria opened the knife until the blade locked in place. She bought it for thirteen dollars at Gander Mountain. The guy at the counter pushed greasy hair behind his ears and asked her if she knew how to handle a knife like that. She played the flirt and let him show her. He asked how old she was, and she said, Old enough.

Bailey swallowed. The paper crinkled. “We come here as day dies to offer supplication to he who lives forever. Only the gift of death can save us.”

“I’m not scared,” Juliette said. She lifted her dress in a curtsy and hummed a stupid pop song.

“Patience, Julie. The surprise is coming.”

“She’s right. This is stupid,” Bailey said. She folded the paper, but couldn’t meet Maria’s stare.

The knife, curved to a tip and serrated along the straight edge, pointed at her.

Bailey was a blind witness, refusing to look.

Juliette swallowed, fear creeping into her now and that was good. As it should be. Life wasn’t all bare legs and cute smiles. Would Juliette insult her? Maybe say something derogatory about Maria and Bailey’s friendship. Go ahead. Jealousy burned hot.

Children’s laughter floated above them.

“What about your surprise?”

She played the knife slowly back and forth.

“That the best you can do?”

She stared, her breath quickening, and that was good too, would make it faster. She huffed, a little girl trying to be tough, and started away. Ground debris crunched under her flip-flops, pink like her toenails.

Maria went for her.

Bailey finally looked up. “No!”

Juliette spun around, and there was the knife cutting through the air, and her hands came up in defense. Sliced her palms. She screeched more in surprise than pain.

“What the fuck? Look what you—”

Maria stabbed Julie’s hand, the girl’s eyes going huge, and then she shoved it all the way through flesh and bone. Julie spasmed, a scream dying in her throat.

Maria pushed hard and they stumbled several feet before Julie tripped and Maria landed on top of her. The knife pushed in to the hilt and the blade pierced her stomach. She gagged, mouth wide, eyes enormous shadows. The sharp metallic-bite of blood mixed with her apple-scented body spray.

Her free arm batted at Maria, smacked her in the head.

The knife came out with a hard, mushy yank. Blood slipped from the blade. Soaked her dress.

The next stab was a hard and merciless punch between her breasts.

After that, it was like beating a rag doll.

Bailey said nothing on the way back, head down. Maria walked tall, a strange grin on her face, her red hands at her sides. Blood stained her arms and blotted her clothes.

Three little kids ran in a circle in her neighbor’s backyard. They laughed and cheered. Maria could not tell who was chasing whom. A woman stood on the deck, watching, a yellow light behind her. The woman raised a hand to Maria. Backlit, the woman was a faceless shadow person.

Maria waved back. Moonlight darkened the blood to oily smears.

She did not tell Bailey to keep her mouth shut, and it was just as well. In the bathroom, Maria stared at herself, black hair long and silky, pale cheeks splashed with blood. She pulled two fingers down her cheek through the blood to reveal the tannish birthmark beneath.

Maria scrubbed her arms, and her mother pushed open the door mid-sentence and was halfway through explaining the latest office gossip when she stopped.

They stared at each other.

Watery blood splashed against white porcelain and whirled down the drain.

One comment on “Halloween Haunts: Magic Pumpkins by Chris DiLeo”