Halloween Haunts: I’ll Carve A Smile Into You by C.C. Adams

This Halloween, I’m going to do something I never did before.

It starts with the biggest, sharpest knife I can find.

The darkness and quiet of night over the neighbourhood.

Because, for the first time, I’m going to carve a jack o’lantern.

As someone born and raised in South West London, I’ve seen how the neighbourhood has evolved. Where I live in the city is mostly quiet; a residential area. I’ve seen it become more progressive. Back then, it was a newsagent or two, a fish and chip shop, a stationery shop and a little cinema. Now, the area shows change, and more diversity. Still with the newsagents, but places to get takeout have evolved – there’s your racial diversity. Now you can choose Lebanese, Afghani, Indian and West Indian. Along with the obligatory fast food places that do pizza and fried chicken, along with burgers for good measure. Barber shops and hydrotherapy and cupping clinics.

Halloween has remained largely the same. With both a primary and secondary school nearby, it’s no surprise that the likes of teens and pre-teens are in the neighbourhood. After it gets dark, children are out in force; roaming in anxious yet excited packs as they’re gently herded by adults. That alone is kind of eerie: to hear hushed chatter and whispers calling door to door. Disembodied giggling. And then hearing other doors in the neighbourhood open, and muted conversation of ‘trick or treat.’ But it’s cool.

I wouldn’t say I’m the most sociable person – which might seem strange if you’ve ever seen/met me on the convention circuit, for example – so I’ll head out into the streets after dark, once the children and their adults have gone home. Certain things I enjoy and appreciate more the older I get. Life is pretty full and well-rounded, so those moments of quiet downtime and reflection are appreciated. Like claiming those streets once the trick-or-treaters and their guardians have left. The chill in the air. The stillness of night.

The glow from jack o’lanterns outside houses.

Most houses in the neighbourhood look the same as they always do. But a few of them will have Halloween decorations. Bats and witches’ hats, cut out of black paper. Cobwebs of cotton wool or some such.

And, of course, the jack o’lanterns.

A walk around the block is usually all I need to round off my enjoyment of Halloween. See those lanterns. Take a picture.

Because, after that walk in the night, I was grinning to myself and thinking, “I want some of this.”

Even as a kid, I was never really into that.

But last year was different; finally thinking, “I wanna make a jack o’lantern.”

Imagine having to wait a year to do that – because that’s what we’re talking about here.

Already I’ve got an idea how I’ll go about it. Order a decent size pumpkin with the weekly grocery shop; probably at least a week or two in advance. That and a small candle. Find a stencil of a jack o’lantern face online that I can print out and draw/trace onto the pumpkin perfectly. Sharp knife needed; accept no substitute. Decapitate that jack and eviscerate him. Put a smile on his face.

Make those eyes light up.

Jack, it’s been years in coming; decades, even. But we’re almost there. Because for the first time, I’ll carve a smile into you.

C.C. Adams is the horror/dark fiction author behind books such as But Worse Will Come, There Goes Pretty, and 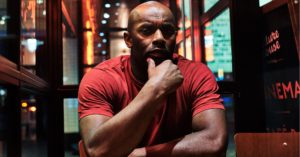 Downwind, Alice. A native Londoner and member of the Horror Writers Association, he still lives in the capital. This is where he lifts weights, cooks – and looks for the perfect quote to set off the next dark delicacy. Visit him at www.ccadams.com, or on Twitter – @MrAdamsWrites

Excerpt from There Goes Pretty: 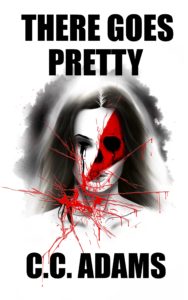 Comfort from the duvet and the shared body heat of her husband, the two of them lying back to back.

Cold clammy air pulsing in front of her face.

If the air were merely cool, it might have been easily dismissed with a roll onto her back. But Denny, dead to the world and snoring softly, lay near the middle of the bed – a solid mass of warm muscle. Rolling was not an option.

Still the same cold air misting against her face.

Head rolling back on her neck, Olivia rose to bleary-eyed consciousness – and stared with a gasp.

Eyeless sockets gazed at her from a deathly pale face, mere inches away from her own, lying sideways with her. A hazy corona like a mane of frizzy hair framed the face, apart from the side that lay against the pillow.

The apparition still facing her.

Screaming, Olivia back-pedalled, with enough speed and force to shift Denny near the edge of the bed, warm flesh slithering over the sheets.

“If you are looking for a modern ghost story that doesn’t pull any punches, then There Goes Pretty is an intimate and chilling descent into the nightmarish world of love, passion and obsession.” – Jim Mcleod / Ginger Nuts of Horror.

One comment on “Halloween Haunts: I’ll Carve A Smile Into You by C.C. Adams”