Today, I thought I’d discuss costumes, mostly some highlights (and lowlights) from my personal history.

I’ll start with one of my first costumes, as a skeleton, when I was four years old.  From a very young age I loved skeletons, so it was an obvious choice.  (The fighting skeletons from the Jason and the Argonauts movie made a huge impression on me, to cite one example.)  My mother deserves the lion’s share of the credit, of course, as she dyed a pair of my pajamas black, and then painstakingly cut out “bones” from a white sheet and sewed these on the pajamas.  I did, though, serve as a technical advisor—I instructed my mom on how each bone was supposed to look.  This was then topped off with a great mask.  I can recall being semi-obsessed with wearing this mask, and my parents confirmed that I wore it weeks before and weeks after October 31st. 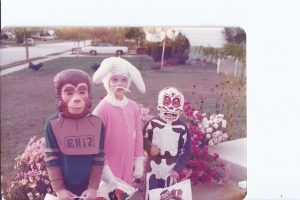 Me with the Easter Bunny and Cornelius from The Planet of the Apes.

Over the next several Halloweens I began to develop personal theories about costumes.  Specifically I got sick of getting overheated, and tired of tripping down steps.  I blamed overly elaborate getups, and poor range of vision due to looking out through small eyeholes.  (My overall clumsiness surely was a contributor also, and independent of whatever type of costume I was wearing.)  Therefore, masks were out, as were trailing ghost sheets, etc.  Being a hobo was a good example of this opinion—a mask wasn’t needed, and you could essentially wear a regular outfit, as long as the garments were suitably ragged and dirty (or at least dirty looking).

I should also mention a definite prejudice that I and most of my peers shared; disdain against kids who wore store-bought costumes.  It was okay to buy a mask, or props, such as a fake weapon, stage blood, vampire fangs, etc., but if you didn’t assemble most of your costume (or more accurately, in most cases, get a parent to help you) you were considered lazy, lame, and unimaginative.  Store bought costumes never won prizes, either, which at this age was extremely important.

The fun went on hiatus at the end of elementary school or so (about ages 11-12).  Dressing up was babyish, and those who still did faced social suicide almost as badly as kids who still believed in Santa Claus.  Adam Sandler did a bit about trick or treating as an older teen or adult with an absurdly minimal costume, like holding a pickle, but in my town junior high or high school students didn’t get into a costume.  The only acceptable way to get trick or treating candy at these ages was to steal it from younger kids’ Halloween bags (probably after beating the kids up).

Flash forward to college, my senior year.  I was living off campus in a house with several friends, and it was decided to hold a joint party with the ladies from the German House at our place.  They told us it was for a German holiday called “Fasching” (“Fashen”?  Both of these are almost certainly spelled wrong), which was essentially a version of Halloween, so it became a costume party.  My friends and I had rediscovered a guilty childhood pleasure (The 70’s disco group The Village People) and we decided to go as them.  (As an aside, to show how poorly attuned my “gaydar” was at age 9 or so, as well as demonstrating my ludicrously backward/stereotypical views of homosexuality, I actually argued with my father that The Village People weren’t gay, because they were so manly and macho.  I know, I know.)  Or I thought we were.  There was some miscommunication, and/or changed minds, as in the end only myself (the cowboy) and my friend Mike (the construction worker) dressed as the group.  Undaunted, we told everyone we were one-third of The Village People.  Alas, the dressing up was kind of awkward, for reasons you may not expect.  Either the German ladies and we housemates were remiss in mentioning that it was a costume party, or else our friends were not fun, because as I recall, only about eight to ten people total were in costume, and the other forty to fifty weren’t.  In fact, the more I think about it, I don’t think most of the German House women even dressed up—maybe “Faschen” was a prank, and we fell for it.  (Because of my righteous indignation, and my laziness I’m not going to look it up and find out.)  Whatever the case, I still had a good time, and being a college party probably half the guests were too drunk to notice that a few of us were dressed kind of strangely anyway.

Again, there was a long break, and I didn’t dress up for another seven or eight years.  By this time I was employed as a field archaeologist, and working in central Iowa.  At the last minute some of my coworkers and I decided to attend a Halloween bar crawl in Des Moines, which obviously required costumes.  With only a few days to spare, and being in a hotel (and yeah, lazy again), we went to a costume store (Eight year old Paul would probably have kicked twenty-eight year old Paul square in the nuts for this etiquette breach).  I went as a Civil War soldier, the joke being it was the one day ever that my pork chop sideburns made sense.  It turned out to be a fine night.  While on the crawl I saw perhaps the weirdest, most disturbing, (and in some ways the best) costume I’ve ever viewed in person.  A guy in an old man mask, wearing pants with missing butt cheeks (a la  1990’s Prince) was pushing a wheelbarrow filled with fake puke (at least I think it was fake puke—alternately he could have been a very self-aware, oddly prepared, lightweight drinker).

Also, I’ve noticed a definite trend in Halloween costumes for women in the past decade or so.  That is, many women seem to use it as an excuse to dress scantily.  I’m not complaining, mind you, it just has struck me, only in a purely sociological way, of course.  There are times when it gets a little strange, though.  The Cracked humor website (which I highly recommend—www.cracked.com) had an article a couple of years ago detailing some of these.  Sexy nurse—cool.  Sexy (female) Darth Vader, though?!  Or kinky witch—awesome.  Adult woman barely dressed as Pebbles from “The Flintstones” (in case you forgot, that character is an infant)—pretty disturbing.

The final stop on memory lane is Halloween 2009.  I was working on a large cemetery removal job, and the thirty or so crew decided to have a dress up party for it.  I opted to be topical and went as a poorly-exhumed grave.  To explain, when we were finished with a grave, we would place a garbage bag on the bottom, so the monitoring crew wouldn’t get confused and think it was another, non-exhumed grave shaft when the backhoe stripped the soil back over the same area again.  Also, obviously, we had to remove all of the coffin parts from the grave shaft, and clearly all of the human remains, too.  So my costume was me wearing a garbage bag, with pieces of (fake) coffin wood and (false) bones stuck to it.  Each grave also had a thick wooden hub

stake at the head, with the grave shaft number on a tag nailed to it, so I put an unused one on a baseball cap (with appropriately blasphemous/obscene/hopefully funny information on its tag) and wore that.  There are two photos of this costume below—one with a friend of mine dressed as Slave Leia.  Unfortunately, my friend Mike (not the one from college) and I did quite well at Beer Pong (we won 7 straight games at one point, as I recall), which left me the worst for wear, and Princess Organa had to help me back into my apartment.  Good times.

So there’s a brief(ish) history of my costumes.  If history holds up, look for me to be dressed up at a Halloween party in about 2017.  I’ll be the guy not wearing a mask (unless I can find that sweet skeleton one in my parent’s attic).

Paul Stansfield was born and raised in New Jersey, and graduated from Rutgers University.  By day he works as a field archaeologist, digging up historic and prehistoric artifacts, and the occasional grave.  He’s had over 20 short stories published, in magazines such as Bibliophilos, Morbid Curiosity, Cthulhu Sex Magazine, Under the Bed, and The Literary Hatchet, among others.  Currently he has stories in four horror anthologies—“Undead Living” (Sunbury Press) “Coming Back” (Thirteen O’Clock Press), “Creature Stew” (Papa Bear Press), and “Creepy Campfire Quarterly” (EMP Publishing).  Another anthology is due out Dec. 13th—“The Prison Compendium” also from EMP Publishing.  His personal blog address is:  http://paulstansfield.blogspot.com

One comment on “Halloween Haunts: Halloween Costumes by Paul Stansfield”