Halloween Haunts: Ghosts Are People Too by Amanda Desiree

Ghost stories go together with Halloween like “trick” and “treat.” The image of the sheet with eye-holes is as much a staple of the season as pumpkins, bats, and skulls. When horror films invariably possess the airwaves, they usually feature menacing, spirted icons like Candyman and Sadako/Samara. Ghosts typically figure in novels and movies as such supernatural villains, from the vengeful phantom seeking to perpetuate destruction (Kayako Saeki of The Grudge) to the restless wraith demanding closure (Joseph Carmichael of The Changeling).

In true-life anecdotes, the role of the ghost is less clear-cut. For one thing, the spirit’s identity is usually vague or forgotten, effaced and reduced to its wardrobe selection: the Woman in Black of Cheltenham, the Brown Lady of Raynham Hall, the Lady in Blue of the Seelbach Hotel, and for inclusion’s sake, the Gray Man of Pawley’s Island. Even Susan Hill’s titular Woman in Black had an actual name and a background, but local haunts tend to rely only on rumor. Yet, they still have the power to frighten.

In my novel Smithy, the purported ghost, whose origins have been lost to history, manifests as a faceless black silhouette, her identity and motives uncertain. If the unknown is the most fearsome thing in the world, then not knowing who a ghost is or what it wants adds to its mystique and terror.

But need ghosts always be figures of fright? What if that storied bogyemonster started life as your loved one?

In his phenomenal book Ghostland, Colin Dickey writes about Thelma Taylor, a Portland teenager waylaid on her way to work one day in 1949 and murdered in the area later to become Cathedral Park. Over the years, stories sprang up about how her anguished spirit screamed around St. Johns Bridge, drawing thrill-seekers and amateur ghost hunters. A reporter relating the tales in the St. Johns Review was surprised to receive messages from Thelma’s surviving friends, former classmates, and even a younger sister, all sharing their recollections of Thelma as a lively flesh-and-blood person they still mourn, not as a creepy spook. Yet, the latter is how most people know Thelma Taylor today. As Dickey notes, “What was once a person’s unbearable loss is now someone else’s ‘strange noises and voices,’ a reminder of how quickly a personal tragedy can be molded. . .into folklore.”

Similarly, in her book American Ghost, Hannah Nordhaus researches the life of her great-great-grandmother, Julia Staab, a world-famous ghost haunting the La Posada Hotel in Santa Fe, NM. I remember watching this ghost story on “Unsolved Mysteries” when I was a child. According to legend, Julia became despondent when her infant daughter died and her mournful spirit remains tied to the property that was once her home. Nordhaus chose to pierce the lore and discover who Julia really was in life. Her findings are surprising and sometimes contradictory, but ultimately they humanize the ghost and establish Julia’s place within society, within a particular period in history, and within her family. Julia ceases to be a weepy phantom and becomes a person worthy of admiration and sympathy. She becomes Nordhaus’s ancestor instead of a campfire tale.

All ghosts, however mysterious or spooky, were once a cousin, a friend, or a grandmother, and as such, they merit our regard rather than our fear. Cultures the world over, from Mexico, with its Day of the Dead (an upbeat celebration following on the heels of Halloween). and China, with its Hungry Ghost Festival, to the Toraja tribe of Indonesia that actually exhumes its dead to share in celebrations, have rituals designed to keep alive the memory of the dead and their place in our lives. The United States, on the other hand, tends to stigmatize death and cringe from its symbols. The presence of a ghost signifies the end of life moreso than its continuity, and so ghosts are typically abstract and frightening. But they don’t have to be. By reminding ourselves that each ghost, however nameless and intimidating, was also a unique person, we can come to view ghosts with awe and respect.

They deserve to be respected. After all, ghosts are people too. At least they used to be. 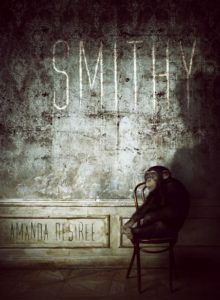 The following excerpt from Smithy (Inkshares, 2021) describes the legends surrounding the ghost of Trevor Hall:

Fred says, “OK, you know how there’s a walkway up on the roof? A widow’s walk thing where you can see in all directions and down to the ocean?”

Fred continues. “The servants used to go up there all the time. Their quarters were on the third level, so there were stairs that went up to the roof, easy. They could walk around, enjoy the view, and not have to worry about the master eavesdropping on their gossip.

Reid says, “You also know that the U-shaped driveway is covered over with beech trees. That was deliberate. The trees shade the stairs leading to the rear servants’ entrance. Sometimes the maids and footmen would go out there on a break to take the air or talk. They could stand at the end of the drive and the trees would block them from the view of anyone looking out a window. It was mutually advantageous. The servants got to have a little privacy and the upper class didn’t have to see any of the help, who were supposed to be invisible anyway.”

The bartender sets down Reid’s drink and Reid takes a sip. His audience waits for him to continue. “According to legend, one of the servants, a woman, was up on the roof—taking a walk, watching the ships, or watching fireworks, depending on which variation you hear. Some say she had been stealing from her employers and the housekeeper caught her. She was going to put the maid out, without a reference. That would have been like a death sentence! Having no reference was a stain on your reputation. None of the other families in Newport—or in the tri-state area—would have hired her. In despair, the girl jumped off the roof and landed right smack on top of the canopy of beech trees. Her weight broke the branches and she got impaled.”

Fred says, “Yeah, she came right down on top of a couple of scullery maids who were out having a forbidden smoke. Scared the bejeezus out of them! One girl had to go into a mental ward because she was so shaken.”

Trish says, “I heard the housekeeper was having an affair with the master of the house and she threw herself off the roof because he wouldn’t marry her.”

Reid protests, “No, no, what really happened was a housemaid from neighboring Herbert Terrace—what’s now Belancourt Mansion—fell off Trevor Hall’s rooftop, supposedly when ‘a strong gust of wind caused her to lose her footing.’ That’s in the inquest report. The servants from both houses used to mingle at parties and special occasions: Independence Day, New Year’s Eve, and so forth. Some even courted. In fact, the carriage driver from Trevor Hall married the Second Parlormaid of Herbert Terrace…”

Shaun orders, “Get on with it!”

Reid continues. “Anyway, the servants were celebrating Independence Day on the roof. Maybe they were trying to watch fireworks from the harbor. This poor girl somehow fell to her death. I’ll bet alcohol was involved.”

Reid says, “Her name was never recorded. The newspaper report just calls her ‘a young housemaid of Herbert Terrace.’

Tammy says, “Well, that’s lousy! How would you like to be known only by your job function? To be nothing but a nameless servant in death as well as life?”

Ruby asks, “Isn’t there any way to research who she was?”

Reid says, “There was no other identifying information in the news item, nothing about her age or survivors, or where she was from originally, and the rolls for Herbert Terrace show a high turnover that month. Almost a whole new slate of servants was at work by August, so you can’t narrow down the dead woman’s identity by seeing who was missing after the party. I guess a lot of the help must have been upset by her death and wanted to leave.”

Fred says, “Or the Herberts sacked them to keep them from talking.”

TODAY’S GIVEAWAY: Amanda Desiree is giving away a digital copy of her debut novel Smithy (in PDF, epub, or mobi format). Comment below or email membership@horror.org with the subject title HH Contest Entry for a chance to win.

Amanda Desiree is a native of Southern California. She has contributed to The Physics of Dark Shadows: Time

Travel, ESP, and the Laboratory (Cultural Studies Press, 2008) and CEA Greatest Anthology Written (Celenic Earth Publications, 2017).  Her debut novel Smithy was released by Inkshares in April, 2021. More about the author’s work and interests can be found at https://www.desireesbooks.com

Library Journal on Smithy: “Desiree’s book begins at a place of extreme unease and never allows readers to get comfortable”

In 1974, a group of students join their infamous psychology professor for a groundbreaking study into whether Smithy a chimp, can be taught to have spontaneous communication through sign language. Housed in a run-down mansion in otherwise glamorous Newport, RI, the crew is focused but isolated. When strange and dangerous things start happening, is it that the house is haunted by nefarious ghosts that only Smithy can see, or are the humans paying a price for the consequences of their animal experimentation?

One comment on “Halloween Haunts: Ghosts Are People Too by Amanda Desiree”