There’s a snapshot of me when I was 10, sitting on a boulder outside of Grand Teton National Park. The picture was taken from the passenger window of our family’s pickup, parked in a long line of trucks with campers on the back, waiting for the day’s campsites to be released. I sat under a pine tree with a hardcover library book open on my lap, irritated to have been distracted from my reading. I was in the midst of discovering Dracula.

I’d grown up watching Sir Graves Ghastly on TV on Saturday afternoons. Sir Graves hosted an endless series of black-and-white horror movies, starting with the Universal classics. My favorite was Dracula, with its Swan Lake soundtrack and the three mysterious women in their white nightgowns. My mom, who was a librarian, pointed out that Dracula sprang from a book. So my fate was sealed.

My favorite scene in the book was — and continues to be — the bit where Dracula feeds Mina his blood. (I’m nothing if not consistent: my favorite scene in Interview with the Vampire is when Claudia says, “I want some more.”) I read all the trashy true-life vampire books I could find, from Bloodlust to Vampires Among Us to Piercing the Darkness. I was fascinated that people were drinking each other’s blood in real-world America.

I’m not saying that my obsession with vampires led straight to publishing Morbid Curiosity magazine in the late Nineties, but I’m not NOT saying that either. Morbid Curiosity collected true first-person confessions about all sorts of shenanigans, from encountering serial killers to exhuming corpses to experimenting with every sort of illicit chemical. I had great fun putting the magazine together.

One of the best parts of the magazine process was hosting the release parties at Borderlands Bookstore each year. There came a moment, in the early 2000s, when one of the audience members came up to me at a break and asked, “Would you be interested in a story about when I volunteered to let Danielle Willis drink my blood?”

I wonder how many other people had the course of their lives set by Sir Graves and his Saturday afternoon picture show. 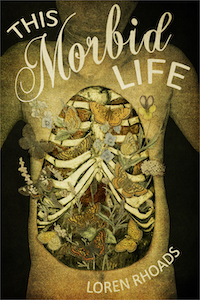 A taste of This Morbid Life:

My six-year-old wakes me in the middle of the night by touching my face. I am groggy, but manage to whisper, “What’s up?”

“Let’s get you settled back to bed,” I say. I force myself to sit up. It’s cold now that I’ve peeled back the comforter. Somehow, we find each other’s hands in the dark. Hers is very warm. She leads me around the end of the bed and back to her room, where she dutifully crawls back under her covers. I turn on the CD. It’s music from the mobile (now dead) that used to hang over her crib when she was a baby. I must have listened to this music thousands of times now.

I kneel on the cold floor beside her low bed to kiss her good night.

“I want to tell you about it,” she says.

“I dreamed there was a vampire trying to get into the room.”

I don’t laugh. This is very serious. “What did he want to do?”

“He was trying to scare me. He wanted to chase us around.”

I don’t think she knows that vampires drink blood. I say, “People think vampires are scary, but they don’t really know them.”

“Do you know any vampires?” Her eyes are luminous in the nightlight.

“How do you know she’s a vampire?”

“She likes to drink other people’s blood. But only after she asks them and they say it’s okay.” I stop myself before I get any deeper into the story than that. Someday, I think, Sorrell will be old enough to read Morbid Curiosity Cures the Blues. She can discover the sexual fetish side of vampirism for herself. Now, she seems to be comforted. She yawns and snuggles into her pillow.

“Sure, Baby.” I reach under her pajama top. Her skin always seems feverish to me. She’s warm-blooded, like her dad.

I feel her relax under my hand. Sometimes, I tell myself, I actually do know what to say. Sometimes I am a good mom. 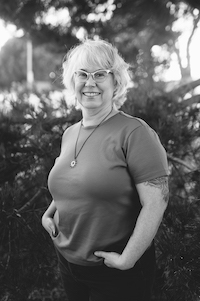 collection, Morbid Curiosity Cures the Blues: True Tales of the Unsavory, Unwise, Unorthodox, and Unusual. Her newest book is This Morbid Life, a death-positive memoir about exploring a medical museums, holding a human heart in her hand, and the most morbid thing she’s ever done. Keep up with her work at https://lorenrhoads.com/ or follow her on Amazon at https://www.amazon.com/Loren-Rhoads/e/B002P905PE/.

The description of This Morbid Life:

What others have called an obsession with death is really a desperate romance with life. Guided by curiosity, compassion, and a truly strange sense of humor, this particular morbid life is detailed through a death-positive collection of 45 confessional essays. Along the way, author Loren Rhoads takes prom pictures in a cemetery, spends a couple of days in a cadaver lab, eats bugs, survives the AIDS epidemic, chases ghosts, and publishes a little magazine called Morbid Curiosity.

Originally written for zines from Cyber-Psychos AOD to Unzipped and for online magazines from Gothic.Net to Jane, these emotionally charged essays showcase the morbid curiosity and dark humor that transformed Rhoads into a leading voice of the curious and creepy.

“Witty, touching, beautifully written, and haunting – in every sense of the word – This Morbid Life is an absolute must-read for anyone looking for an unusually bright and revealing journey into the darkest of corners. Highly recommended!” — M. Christian, author of Welcome To Weirdsville

“Loren’s writing is touching, amusing and strange. It isn’t just an attempt to be morbid for morbid sake – each essay is an intelligent romp through the human experience – weird as it is beautiful.” — Black Flowers

This Morbid Life is available on Amazon: https://amzn.to/2XEwCr7