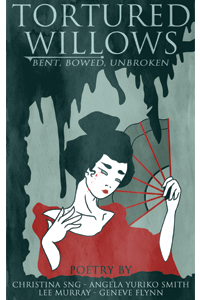 “I have a ghost story to tell you,” Angela says. “I was about 12 years old, and my family was moving from Cheyenne, Wyoming to Bethesda, Maryland. As all this moving was happening, I was parked in Sweetwater, Tennessee with my Southern grandmother in an old Victorian-styled manor. My grandmother had gone across the street to visit Mrs. Jacob, leaving me alone in the house. This happened every Friday, and I loved it as it gave me time to steal cigarettes from the kitchen drawer and sneak booze from her stocked bar in the front room.”

We giggle nervously behind our hands. Why are we not surprised?

“This time, I didn’t get more than a few feet into the front room before a noise stopped me,” Angela says. “Something was tapping on the plastic cover of the record player across from me. It tapped three times, slowly and loud, and then nothing.”

Above us, the willow hunches as if to hear the tale.

“I started walking toward the record player, very slowly, to see what may have made the noise,” Angela continues. “To my left and above me came a tinkling sound. I stopped and looked up to see the chandelier trembling. It caused all the little crystal teardrops to make the noises as they hit each other. That wasn’t the scary part, though. The chandelier trembling could have been an earthquake, wind… I would have found an explanation. The scary part was what was in the chandelier that I couldn’t explain.

“It was like looking at a distortion, like heat waves over a fire or hot asphalt. This distortion was in the middle of the crystals, shaking them. Then suddenly, it dove at me with the sound of a loud wind that filled my ears.

“I exploded onto the porch and let the storm door slam behind me. I almost ran across the street to my grandmother, but I knew I wasn’t supposed to leave the house unlocked. I wouldn’t turn around, but in my mind, I could see the porch behind me.

“Behind me, in the door, the shimmering distortion collected in on itself and too substance, becoming a head. It was a woman, and her face was bloated and swollen. Her eyes were rolled up in her head, or maybe just white. Her hair was soaked and dripping, plastered to her face. Where it hung down, it was tangled in a mass of cords that hung from her severed neck. Her mouth was open and working as if she were trying to scream something. Her eyes rolled in her head and the cords and wet hair swung with her gentle movement.

“When my grandmother came back, I told her about the head and we moved, I want to say that night. There’s more to the story, of course, but that’s for another time. I always thought of it as a ghost that belonged in Tennessee, trapped in that small town. It was only recently I heard the name nukekubi, and when I asked what that was, I had my own ghost described back to me.”

“So here’s a stanza,” Angela says. “From one of my poems in our collaborative poetry collection Tortured Willows.”

out of place in Tennessee…

The hair on my neck rises.

“I chose to write about the nukekubi for the anthology,” Angela says, “because it was one of scarier ghosts I’ve seen in my life, and one that I thought I understood, based on a local Tennessee legend, who is now a bigger mystery to me. Can ghosts be cross-cultural, or was there an Asian ghost lost in Tennessee? And was she trying to hurt me, or did she sense some kind of kinship and was asking me to help her get home?”

I shiver as I consider that. Is Angela destined to become a ghost whisperer for displaced ghosts? The flutter of the willow’s leaves suddenly seems sinister.

Eventually, Christina says, “The story of the flat-faced woman scared me most as a child.”

Nods of agreement from around the fire. We’ve all the heard tales of faceless female ghost, and we’ve read Christina’s poem, “Flat” which appears in Tortured Willows.

“Even more so than the head-hunters, who were at least human,” Christina goes on. “The tale of what happened to her is true. She was pushed. But of course, now as an adult, I see clearly who is the true monster.”

“My first literary experience of ghostly tales was reading the Lao Fu Zi (Old Master Q) comics as a child,” Geneve says, and I exhale. At last, we’re on safer ground. “The series was created by Alfonso Wong in 1962,” she says. “It was hugely popular in Malaysia, and is still in print today. Along with themes of social change and satire, the comics often lampooned the supernatural, featuring ghosts, monsters, and aliens. The frank humour in how Old Master Q and his friends responded to the uncanny helped make these things not only possible, but also digestible. Horror was something to meet, respond to, and sometimes laugh at: it was part of the world.”

I shift uneasily. Geneve’s comment resonates. For many people of Chinese heritage, the dead are part of the everyday. My mother, for example, tells of visits from ghosts over the years. Not flat-faced women nor Angela’s gruesome nukekubi, but family members who have passed. Her own father once stopped by and sat on the end of her bed with a message for her future. Rather than uncanny, my mother found it ordinary. But hungry ghosts are different: with their needle thin necks and distended stomachs, these pitiful ghosts are typically greedy or ambitious women, or women who had shamed their families in some way, who didn’t conform to expectations of submissiveness and sacrifice.

I gaze into the shadows and think about “Fury’ my tiny poem of just 13 words, which tells of my own encounter with a hungry ghost.

“Tell us about your ghost poem in Tortured Willows, Geneve,” Angela urges.

“My poem “Bride Price” explores the Chinese practice of ghost marriage, where single deceased men and women are wedded in a ritual conducted by their living relatives. Dying unmarried brings great shame to families, and can mean that the spirits of the dead cannot be at peace. An unwed man will not be buried in the family plot for fear of bringing bad luck to his living relatives; an unwed woman will not be buried anywhere.

“The custom was originally only to ensure the dead could fulfil the earthly wishes for companionship and continued patrilineage in the afterlife. However, it has recently morphed into something more sinister.”

Geneve’s eyes flash in the firelight. “Due to China’s one-child policy and the preference for male children, females are sometimes aborted or abandoned, resulting in a large sex-ratio imbalance. This means there is fierce competition for “ghost brides,” leading to incidences of grave robbing, hospital auctions for dying girls, kidnap, and murder.”

Geneve goes on, “The dark shadow of ghost marriages seems to illustrate the low value placed on a woman’s life, taken to the very extreme.”

Daughter: Why are avenging ghosts all women?

Mother: Because we have just cause.

Her tiny poem is perfect; it makes me shudder because I’d been thinking the same thing. I offer my own haiku to the group:

As my words spool away on the smoke, Geneve says:

What sharp truth choked her silent?

“A peony represents a young girl in Chinese culture,” she explains. “The flower is also thought to symbolise spring, female beauty, and reproduction.”

I lift my collar as the willow rattles in the breeze. Asian ghost poems are bleak.

“Let’s talk about why we wrote Tortured Willows,” I say hurriedly. “Less scary. Apart from the fact that poetry is basically a new form for me. I’d only published around a dozen poems before now.”

“But was such a wonderful opportunity to continue the conversation begun with Black Cranes,” Geneve says. “The response to the anthology was amazing: the themes seemed to resonate with readers, and we got to showcase our experiences, our culture. But there is so much more to say about the issues that face women and Asians, and Asian women.

“In particular, I wanted to examine the devastating effect sexism continues to have in terms of gendered violence, inequality, and internalised misogyny. I also wanted to explore how culture intersects with gender to place Asian women and girls at risk.

“And finally, Tortured Willows was my chance to work with Lee Murray, Angela Yuriko Smith, and Christina Sng again, and to try my hand at poetry. How could I say no?”

Angela clasps her hands, perhaps thinking about the hijachi hand tattoos once worn by Okinawan-Uchinanchu women. “By contributing to Tortured Willows, I’ve received far more than I expected,” she says. “The Uchinanchu culture is almost invisible, even to the second and third generations. An indigenous tribe that was considered barely human to Imperial Japan, beginning an era of cultural annihilation. This was a chance for me to discover who I am, who my mother and grandmother are.”

Christina smiles. “I was struck by how diverse our experiences are and how powerful these poems are in showing readers that the term Asian encompasses an incredible wealth of diverse yet shared experiences among us,” she says. “Decades ago, I first watched The Joy Luck Club and Raise the Red Lantern. They were real shocking eye-openers for me in looking toward the west and looking back at the history of my ancestors. They opened the first door into the harsh reality of what our predecessors must have faced and what we have inherited from them. I felt the same impact reading your poems. They were beautiful and sad, powerful testaments to a moment in time, a piece of history we recorded. The Willow poems were the hardest I’ve ever written to share with the world.”

Angela agrees. “The hardest words I’ve ever written are in Tortured Willows. They are also my best words.”

The fire has burned down, so we get up to leave as the shadows gather beneath the willow.

The willow is femininity, desire, death. Rebirth. With its ability to grow from a single broken branch, it is the living embodiment of immortality. It is the yin that wards off malevolent spirits. It is both revered and shunned.

With exquisite poetry, Christina Sng, Angela Yuriko Smith, Lee Murray, and Geneve Flynn invite you to sit beneath the tortured willow’s gravid branches and listen to the uneasy shiver of its leaves. 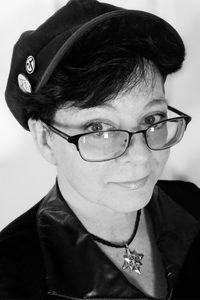 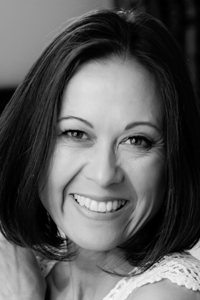 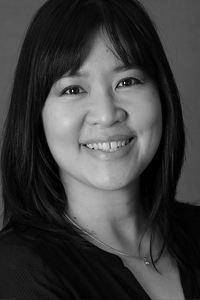 TODAY’S GIVEAWAY: Yuriko Publishing is giving away a print copy of Tortured Willows. Comment below or email membership@horror.org with the subject title HH Contest Entry for a chance to win!