And the Clock Strikes Midnight: Time and Timing in Terror, Part I 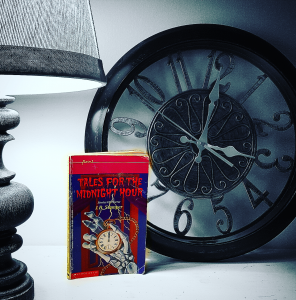 Whether it’s the beeping of an alarm clock marking a night over too soon, a school buzzer announcing the start of a test period, or the chime of a grandfather clock in an old house declaring the start of the witching hour, there are lots of ways that time can provoke dread. So, when writers look no further than flashbacks and verb tenses, they miss out on timely tension opportunities.

With a little attention towards the timing of the horrors in your story—pacing as well as narratively—you can save yourself time in revisions, time better spent dreaming up new nightmares to implant in the fertile minds of your young readers.

First, you’ve got to figure out the best times for your horrors to strike. For this, you need to keep two axes (plural of axis, not axe) in mind: the external, physical timeline of pages experienced by the reader between scares, and the in-story time passage experienced by the characters. While it’s great when these two lines meet and overlap (e.g. during a tense scene when the protagonist experiences time in slow motion, with a reader savoring the moment), too much intersection becomes narratively unsustainable easily, or for some audiences unfeasible, because of the need to maintain the suspension of disbelief.

After all, the great joys from horror come from imagining yourself facing the horror, imagining the horror in the real world—rebuilding a shaken suspension of disbelief is a crapshoot at best, as we’re already working against the safety of the book as a fictional construct.

In terms of the story as a construct, the two traps to look out for are audience specific needs and gimmick fatigue. Gimmick fatigue is the result of the same thing happening so much that it becomes hum-drum; who cares that the wall is oozing blood or that the locked door shows signs of a break-in when there is a killer on the loose, if this is the sixth time that either event has happened without any especially dire consequences?

Cliffhanger abuse paired with short chapters is an especially dangerous technique combination, as when not handled tactfully it draws too much attention to itself, and to the mechanics of your story, which kills immersion and frustrates readers. So, plan to leave enough time in between moments of tension for the tension to build, but if you find yourself getting repetitive in a way that doesn’t have any changes or progress, then cut and streamline. Sure, it’s easier said than done, but if you have it in mind while writing, you’ll have an easier time building the plot and less work ahead of you in revisions.

Especially in horror for kids, there are two types of audiences with pacing requirements that also influence plotting—younger audiences and reluctant readers. For these readers, too much time in between scares and they run the risk of feeling like they’re working too hard for not enough pay-off. Horror has a wonderful place in developing literacy by providing high interest incentives and rewards—if your story is served by a faster pace and suits the tastes and needs of these audiences, embrace it.

Take honest stock of the book you are writing and the audience it is meant for, and make sure you don’t try their patience too much by making them wait too long in between the good stuff. These are the readers who don’t need as much of a cool down period for tension to build anew; their emerging reading skills do that work for you.

The appropriate waiting time for readers versus characters is one of those places where the in-story and out-of-story axes and timelines should not align. The key is to keep in mind logical reactions to the horror unfolding on your pages—it’s good if the reader and characters share similar levels of dread, better if the reader dreads slightly more, and dangerous if the reader dreads dramatically more (because they could become frustrated with the protagonist and have their story immersion shaken).

Tactful time manipulation is the best way to control reactions of both reader and character. You want your character’s experience to have enough cool downs in between scare-spikes that the reader can believe that the character wouldn’t cut and run, but at the same time you don’t want the reader to get too comfortable.

Ideally, you will use the temporal spaces between scares for character development and things that make your reader like your characters enough to worry for them in the face of your foreshadowing and other hints of tensions yet to come. The moment you find yourself grasping at something just to fill the space, it’s time to stop and return to the questions of what reaction you need from reader and character alike in this moment, and what stimuli will logically provoke it. Gloss over time if you need to; toss in a red herring (but not too many) or a subplot if your story needs to breathe, but make sure that the reader’s reaction doesn’t stray so far from the protagonist that she loses sympathy or doubts the legitimacy of the character’s reactions.

So far, we’ve treated time as a way to build trust for readers—something to add to verisimilitude and enhance immersion. But madness has a long relationship with horror; and frequently a way to demonstrate the character’s break from reality is to undermine the stability of their perception.

You can do this by destroying the cohesiveness of the character’s experience of time (missing time, impossible or inconsistent timelines), but only do this after you have already established a solid enough concept of time that the reader won’t see it coming. If you start off with time too shaky, then losing it won’t have impact. This also applies to supernatural horror, where the scare comes from the rules of reality being established and then broken.

Unfortunately, however, we are out of time for this month. So, please forgive this cliffhanger, and tune in next month for German psychobabble, the Witching Hour, and why clocks in particular work so well as solid symbols specifically for young audiences.