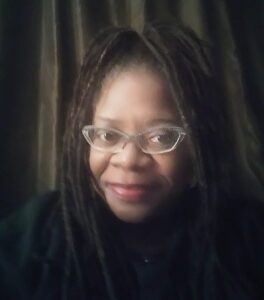 Penelope Flynn creates mixed genre adult-targeted speculative fiction and illustrations featuring elements of dark fiction, horror, suspense, science fiction, fantasy, and erotica and erotic romance. Her works are included in the Dark Universe anthologies, Steamfunk, Scierogenous II, and SLAY: Stories of the Vampire Noire. She authors the Sci-Fi/Horror/Erotica mash-up series, the Chronicles of Renfields, and co-edits and contributes to the Blerdrotica, Black erotica anthology series. She is a member of the Horror Writer’s Association and has joined the faculty of the Speculative Fiction Academy. She has appeared on panels for World Fantasy Con, WorldCon, MultiverseCon, Blacktasticon and the FAMU Literary Forum. Penelope Flynn moderates and co-hosts the weekly podcast, Discussions From the OTHERhood and heads Prolific Hybrid Multimedia.

I have been a storyteller from childhood. I had ideas for stories and writing projects even as I trudged through my undergraduate academic career and through law school. But it was during maternity leave with my third child that I took a screenwriting course. Because most screenplays are about 120 pages they provided me with a shorthand to getting my visualized stories out of my head and onto paper. Comic book scripts, short stories and novels followed.

I have always loved horror, ever since I was very young. I think one of the attractions is that in real life, the monsters we encounter have almost unlimited power over us and seem invincible. But what horror teaches us is that there is usually a rule or legend… a silver bullet, a wooden stake, salt, water, a talisman… a method that a normal person can employ to vanquish the monstrous entities in our midst. Through knowledge and courage we become giant slayers.

I don’t think the effort is conscious. It is the natural outgrowth of being an African American woman. I see the world through this African American woman’s filter, so to have people who look like me and mine in my stories, especially as seminal characters is the rule rather than the exception. As a result I want to show people who look like me in all the facets I have seen in people that I know… strong, clever, witty, self-absorbed, intelligent, cruel, loving… not stereotypes – just like the people I know and grew up with.

I have found that horror can sometimes hold up a funhouse mirror to reality. The people, things, and institutions that a culture holds dear can at times be monstrous. Horror has helped me to acknowledge that, in creating analogies which contend that the monster is not always what or who we think it is. As African Americans there are individuals and systems that the larger population might consider positive. But those same individuals and systems can have negative effects on our very small 12% of the U.S. population. In the same manner that the original Invasion of the Body Snatchers and The Thing From Another World used horror as an analogue for socio-political issues I find that I have gravitated toward that same tradition. Through horror I have learned that I can take incidents both traumatic and triumphant and translate them through a grotesque funhouse mirror, to morph or manipulate them into horrifyingly memorable experiences for the reader.

I am a lover of classic horror. I grew up feasting on Hammer films, Universal horror films, books about ghosts and witches, and Alfred Hitchcock anthologies. We were weaned on The Night Gallery and The Twilight Zone. I think horror has broadened as we become more inclusive not just in the U.S. but worldwide. With Jordan Peele stepping onto the scene I think he has breathed new life into horror using it as a vehicle to tell our stories without us being the sidekick or other minor character and I really love the Blumhouse offerings. I have seen so many new and different actors that I haven’t seen before. Then there is the Korean horror market with its fantastic works that are raising our standards as to what gorgeous, intelligent, and visceral horror should look like. Also that the anthology shows are making a comeback. For a long time the networks steered away from them. But now the streaming services with shows like Dark Mirror, Room 104, Love Death and Robots are picking up what the networks IMHO foolishly left behind. Then we had the Tananarive Due and Stephen Barnes’ 2021 Horror Noire Anthology film on Shudder which was wonderful and really show-cased so much talent on screen and in the writer’s room. None of the stories were cookie-cutter and they all generally hailed from a black perspective, which was nice. We have so many more writers nowadays who feel comfortable creating in the horror space. In the Mocha Memoirs Press, “Unfleamed” anthology I was introduced to writers I hadn’t known but who write wonderful horror-themed narratives. Mass Media is taking Horror seriously now, so I foresee even more artfully crafted works.

Most of us cringe when we consider that “Black person is always the first to die,” or “never makes it to the end of the film” trope we’ve seen in horror cinema. Those that included us often forced Black people into stereotypical roles. This certainly didn’t encourage Black viewership and probably slowed Black people’s interest in horror films. For me, Blade was the first big market horror-based film that showed Black people as in control, smart, bodacious, and beautiful. Jordan Peele’s Get Out, provided a sympathetic hero in a film where Black people understood the real terror of isolation with people whose trust was suspect. The concept of taking control of Black bodies was literal and was probably the first horror film that many Black people ever saw. It showed our main character as naïve. But ultimately he understood that he was engaged in a battle for his survival against people he thought were his allies. I doubt seriously that a film of this magnitude could have been made even ten years ago; and to such acclaim. On the small screen the 2021 Horror Noire anthology film on Shudder has introduced great writing, acting, and directing. As more of us write and direct I think there will be more depictions of Black people that move away from stereotypes and toward better stories that elucidate fears through a framework of our cultural sensibilities.

Be true to your own vision. Horror is very cultural. The part of our culture that is European has told its tales over and over and those paths are well-worn. Dig deep into the resources of your own cultural past and those of the community around you. I am sure you will find amazing new horror tales and incredible ways to tell those tales, which are right in your own backyard.

I would say that each person has a unique filter. No one has seen the world via the prism of your existence or in the same way that you have. Because your perspective is singular, no one can write the exact same story that you have to offer and maybe the form in which you offer your story will change someone’s life.