You can see any of “The Seers’ Table” posts since inception (March 2016) by going to the HWA main page and selection menu item “Our Blogs / Diverse Works.” 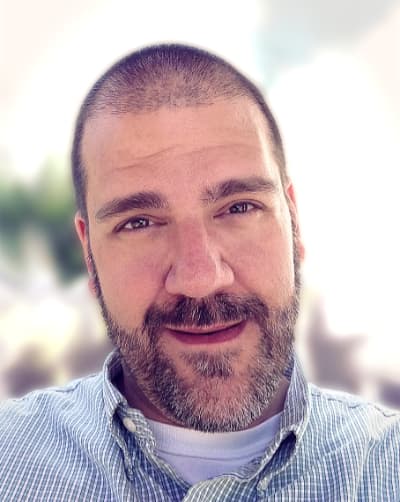 Rob Costello is a queer man who writes contemporary and dark speculative fiction with a queer bent for and about young people. His work has appeared in The Dark, Hunger Mountain, Stone Canoe, The Magazine of Fantasy & Science Fiction, Narrative, and Rural Voices: 15 Authors Challenge Assumptions About Small-Town America (Candlewick, 2020). He holds an MFA in Writing for Children and Young Adults from the Vermont College of Fine Arts. He is an active member of the HWA and has served on the faculty of the Whole Novel Workshop at the Highlights Foundation since 2014. He lives and works in Ithaca, NY with his husband and their dogs. His latest story, “The Thing With Chains,” can be read at The Dark (@thedarkmagazine). 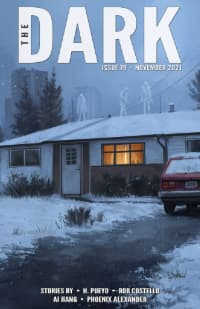 “He drains what remains of his drink and debates whether to grab another. More rum might help to blur the edges a little bit faster. At these sorts of parties there’s usually a tipping point early in the evening, a moment when the booze and drugs flip a kind of switch in his brain, either in the pool or hot tub or laid out across the cool sheets of somebody’s waterbed. It’s almost like Paul Newman in Cat on a Hot Tin Roof: He feels that same mechanical click inside himself, and then his body gives way to it, ebbing into the pleasure of the moment as liquid and freeing as pissing underwater. That’s when the lights go out inside of him and something darker and hungrier emerges to feed, some creature like a vampire at twilight, or a werewolf at the rising of the full moon. Maybe he needs that creature now. Maybe it will keep him safe tonight. Maybe it will hold Palazzo di Bacco at bay.

Or maybe it will just eat him alive.”

Find out more about the author at http://www.cloudbusterpress.com; Twitter: @CloudbusterRob. 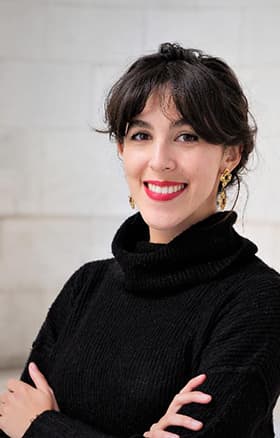 Isabel Cañas is a Mexican-American speculative fiction writer. After having lived in Mexico, Scotland, Egypt, and Turkey, among other places, she has settled (for now) in New York City, where she works on her PhD dissertation in medieval Islamic literature and writes fiction inspired by her research and her heritage.

Mexican Gothic meets Rebecca in The Hacienda, her debut supernatural suspense novel, set in the aftermath of the Mexican War of Independence, about a remote house, a sinister haunting, and the woman pulled into their clutches …

During the overthrow of the Mexican government, Beatriz’s father was executed and her home destroyed. When handsome Don Rodolfo Solórzano proposes, Beatriz ignores the rumors surrounding his first wife’s sudden demise, choosing instead to seize the security that his estate in the countryside provides. She will have her own home again, no matter the cost.

But Hacienda San Isidro is not the sanctuary she imagined.

When Rodolfo returns to work in the capital, visions and voices invade Beatriz’s sleep. The weight of invisible eyes follows her every move. Rodolfo’s sister, Juana, scoffs at Beatriz’s fears—but why does she refuse to enter the house at night? Why does the cook burn copal incense at the edge of the kitchen and mark the doorway with strange symbols? What really happened to the first Doña Solórzano?

Beatriz only knows two things for certain: Something is wrong with the hacienda. And no one there will save her.

Desperate for help, she clings to the young priest, Padre Andrés, as an ally. No ordinary priest, Andrés will have to rely on his skills as a witch to battle the malevolent presence haunting the hacienda.

Far from a refuge, San Isidro may be Beatriz’s doom. 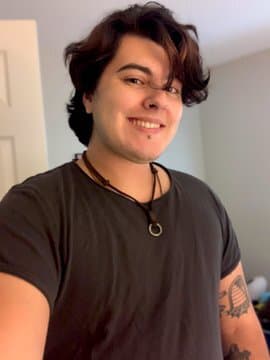 He is currently running a Kickstarter for a queer graphic novel, Let Me Out. It is an unapologetically queer graphic novel that takes on classic horror tropes and turns them on their head. At 185+ pages and in stunning full-color, they are funding for the production and exclusive digital release of their adult, horror original graphic novel. 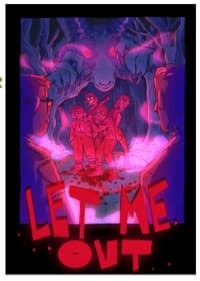 Let Me Out is about how marginalized folks are sacrificed on the altars of power, and what happens when a group of queer and trans friends are given the supernatural means to fight back. It is also about found family and the joy one finds in one’s friends, even amidst seemingly inescapable darkness.

Recommended Reading: “When the Man Comes Around,” from flash fiction publication, The Molotov Cocktail.

The face of the kid he’d crashed into at the four-way stop kept resurfacing in nightmares, bobbing up like a bottle cork, appearing on his father’s body, with his brother’s hair and tee shirt on. He looked as Pattie’d seen him later on, in a photo the police had taken of the kid lying sideways out of his busted car window.

The hospital had a small army of baby monitors from natal intensive care. His restlessness had made the resident supervising his case nervous, and a monitor was placed firmly out of his reach on a far table. He hadn’t bothered to ask if they’d caught one voice or two emanating from his room at night on the receiver.

He’d been alone for about an hour when Johnny Cash came back. His black coat interrupted the unblinking, red cyclops eye on the monitor as the ghost clambered past the window sash. 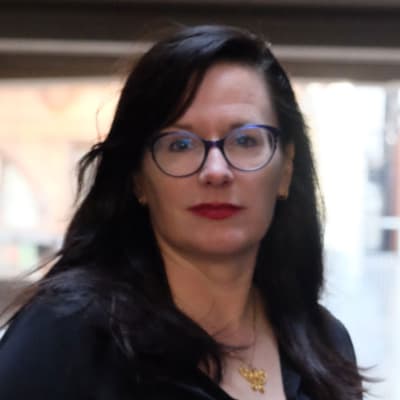 Kate Maruyama. Her first novel was Harrowgate (47North, 2013). Her novella Family Solstice is out now from Omnium Gatherum Media. Her short works have appeared in Asimov’s, Entropy, Cultural Daily, The Coachella Review, and other journals. She has been a jury chair for the HWA Bram Stoker Award® and was twice a juror for the Shirley Jackson Awards. She is on the Diverse Works Inclusion Committee for the HWA. She writes, teaches, cooks, and eats in Los Angeles, where she lives. 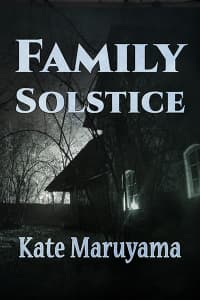 In Family Solstice, the Massey family loves their house. It’s been in the family for generations, and the land on which it sits has been with them even longer. In the summer everyone comes through to visit and the house is alive with family friends, barbecues and lobster boils. But come fall, the mood shifts as all of the kids start training for their turn in the basement.

Shea, the youngest Massey is training extra hard. She’s thirteen and that means this is her year to battle on Solstice. Her older siblings won’t tell her exactly what’s in the basement, you don’t know until you’re fighting it. She’s excited finally to be in the know. She does know that whatever happens in the basement every December 21 makes it possible for the Masseys to spend the rest of the year enjoying their home and all that it brings. It is her family duty. But something about this year is different. Mama’s extra quiet this fall, and the house is breathing early. Maruyama explores the dangers of tradition, inheritance, and the sins of the father in this horror novella.

This is my first time in the basement at night and my only time alone. It smells of dirt floor with an undertone of oily singed furnace. I’ve only ever been down here in the summer with Martina for tools, or, on the hottest days.

I hate these stairs. They are wood, and have a railing, but there are no backs to their risers. It’s only ever dark blackness at your ankles with the unknown space behind. Anything could reach through and grab your ankles. I get a creepy feeling around my legs like a million cockroaches, but I stand still an extra moment. Normally I’d scramble down to the bottom, closer to the ground, safer. But tonight, the house is breathing heavily, and I’m inside that breath. A million cockroaches beat whatever’s waiting for me down there in the dark.

The house sucks in a furnace-deep breath and there’s a clank and it exhales a sigh. I know I have to get in position, ready to start, or it will get the advantage. I grip the poker in one hand, try not to sweat too much on the flashlight, and start down the stairs, unsteady as I haven’t any hands to hold the rail. I go one step at a time, preschool style. I breathe, whispering, “Remember,” into the empty space. Scuff, step, “Remember.” Scuff, step, “Don’t look.” 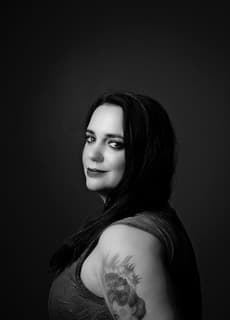 Nico Bell is an author whose work runs the gamut from love to murder. She started out writing fiction in the Christian and romance genres. However, she noticed that many of her characters often met an untimely demise. After realizing where her real interests lay, she came over to the dark side and began writing the scarier stuff.

Dabbling in drabbles and flash fiction, Bell is also a revered horror and science fiction reviewer. Using that opportunity to see both sides of writing may have given her a secret weapon, and we are just happy to be the lucky recipients of her work. Regardless of genre, the talent is apparent as Bell was a finalist for several awards in the Christian and romance categories. 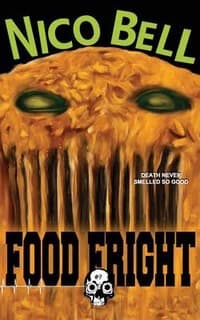 Her debut novel, Fright Food, is a wonderful dive into high school hijinks gone murderously wrong. Starting in the first chapter, the read is guaranteed to turn your stomach in a weirdly delicious way. However, the lessons go much deeper than deep-dish pizza. Friendship, redemption, and revenge served cold weave throughout the narrative, tapping that vein of similar experiences.

Nico is also a publisher and editor of the horror anthology Shiver released in January 2021. Consisting of 30 stories to keep you cold on those scary winter nights, this anthology has stories of every flavor and has garnered wonderful reviews.

With her talent of moving through different genres seamlessly, every read is an adventure with Nico Bell. I am eager to devour her next offering.

Not a soul in sight, but a foul odor filled the air and singed Cassie’s nostrils.

Another scream, followed by thumping.

Cassie dropped to her knees and peered into the oven closest to the door.

Jennifer kneeled inside, slamming her palms against the glass. Tears streaked her cheeks as her pale skin flamed a dark shade of pink. The wire coils of the oven blazed red against her bare knees, and bile rose to Cassie’s throat when she realized the scent filling the room was burning flesh.

“Help me get her out!” Cassie pulled the handle, but it wouldn’t budge. The old ovens didn’t always work properly, Cassie knew from her experience in Home Ec. She tugged again as Jennifer wailed.

Lauren grabbed hold too, but the door refused to unlatch.

“Turn it off,” Erin’s voice came from behind.

Cassie reached for the dials, turned them to the off position but nothing happened. The coils blazed and a fire sparked beneath Jennifer. Snot and tears dripped from her face as the flames licked her body and curled up her chest, dancing through her hair and scorching it to the roots.

Erin and Heather remained fixed, terror written on their faces as Cassie tried to find the oven’s plug. But the unit was built into the cabinet and she couldn’t reach behind. She looked around and grabbed a chair. As she hurled it to the oven’s glass door, one final cry came from inside.

And then whimpers as the chair thumped harmlessly against the oven.