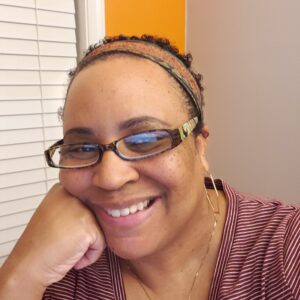 L. Marie Wood is an award-winning psychological horror author and screenwriter. She won the Golden Stake Award for her novel The Promise Keeper. Her screenplays have won Best Horror, Best Afrofuturism/Horror/Sci-Fi, and Best Short Screenplay awards at several film festivals. Wood’s short fiction has been published in groundbreaking works, including the Bram Stoker Award Finalist anthology, Sycorax’s Daughters. She is also the founder of the Speculative Fiction Academy, a professor, and horror scholar.

I have always wanted to write. My earliest memories are of me thinking about a story and writing it down. As a child I used to watch television shows and write down the dialogue. I didn’t understand then that I was trying to understand pace and timing, but I knew that there was something about what I was seeing on screen that was intriguing and I wanted to replicate that. So I don’t know if anything actually inspired me to start writing – I think the inclination has just always been there.

As early as my inclination to write came about, so did my understand that what I would be writing was horror fiction. I knew that I liked the monsters of the genre, but that they weren’t what I wanted to use in my work. I have always loved the question ‘what if?’ and that lends itself very directly to psychological horror. Something about ordinary things being looked at from a different angle, one that makes them different in some way – changed… it really spoke to me, and still does.

Most often, my characters are not ascribed a race – the concept of race doesn’t usually fit the story I am trying to tell, so it is not something that I work in. I have written stories that have Black characters – my second novel, The Promise Keeper, for example, has a Black antagonist – but that is how the story came to me. I write what speaks to me, focusing on the material rather than race and that process has helped me to tell the stories that I want to tell. That said, when I write Black characters, I make sure that they reflect real people with real reactions to the world around them and real contributions to make. Too often that has not been projected… people operate off of assumptions that they shouldn’t. As a Black person, I think it is important that we are reflected accurately as intelligent people, people with a wide range of emotions and responses – just like everyone else.

Writing horror has shown that, even through tough times, people still want to come together and be entertained. In the case of horror, they want to be frightened, but the same could be said of other genres in terms of what the base response is. They want to feel something and that sentiment is true of every pocket of society. I feel that I am able to contribute to that entertainment with what I do, that I might even be able to help someone find catharsis in that moment when they let their brain relax and just enjoy.

Horror changes as we change, so yes, absolutely. In the twenty…-ok we don’t really need to calculate just how long it’s been, do we? Since I have been writing, I have seen smartphones be created and apps take over the world. I have seen electric cars on the road and school being conducted online. The world has advanced and horror has done so as well, using the technology of the day to add to the stories that are told. I think that will continue – we’ll figure out a way to make something brand new sinister… I’m sure someone is already thinking of something amazing for that self-driving car already!

I think the Black people are represented based on stereotypes, for the most part, and that needs to change. We need more Black creators – more novelist and screenwriters, but also more directors, producers, and podcasters, showrunners – we need more people in the room to make sure that what is being shown is what is reality and not a popular fiction based on biases that have been circulated throughout generations. A lot of things have the change to make that a reality – the publishing industry has to realize that Black people can and do write more than social commentary-laced work; readers of all backgrounds need to expand their horizons and read work written by Black creators without the race of the protagonist/antagonist being a factor, etc. Progress is being made, but there is more work to be done.

Keep doing what you do. Period.

Several things, actually. Learn as much as you can from as varied a group as you can. Read broadly. If you get an idea, jot it down quick, before your mind has the chance to clean it up, modify it, or dismiss it. And finally, keep writing.